Ryan Graudin, author of BLOOD FOR BLOOD, on when the task of writing feels crushing

BLOOD FOR BLOOD is the second book in the Wolf by Wolf duology, and we're delighted to have Ryan Graudin with us to chat about it. 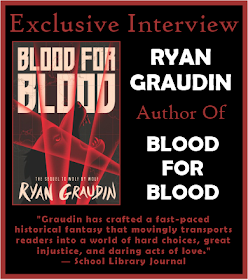 Ryan, what was your inspiration for writing BLOOD FOR BLOOD?

The WOLF BY WOLF duology has many roots, as it is smorgasbord of genres. The most obvious inspiration is history. I love researching and learning about times before our own, and World War II has been a special point of interest for me since childhood. That war juxtaposed the extremities of human nature in ways few others have. Many YA authors like Elizabeth Wein, Jerry Spinelli or Markus Zusak (to name a few) delve into that conflict in powerful ways. However, there were hardly any WWII alternate history books in the YA canon when I was in the inspirational stages of WOLF BY WOLF (I can’t even think of one). This gap was one of the reasons I decided to push WOLF BY WOLF’s world in that direction.

The motorcycle race in WOLF BY WOLF was partly inspired by “The Long Way Round,” a BBC miniseries where Ewan McGregor and Charley Boorman ride motorcycles all the way from London to New York via the Road of Bones in Siberia. Their journey was fraught with accidents and natural disasters and after watching it I couldn’t stop imagining what such a competition would look like. Historically, given Joseph Goebbels affinity for pomp and circumstance, and the fact that the Hitler Youth had a special branch dedicated to learning about motorcycles, the Axis Tour isn’t as much of a stretch as one might imagine.

BLOOD FOR BLOOD itself was obviously inspired by the first book, as well as many conversations with WWII buffs about how a resistance might possibly take down the Third Reich in such a scenario. My second Operation Valkyrie took a lot of its cues from the actual Operation Valkyrie, which took place in 1944.

This book taught me that even challenges that feel impossible can be met, and met well. I remember standing outside of my local coffee shop in 2014, staring at Christmas lights glowing in the early dark and being seized with the certainty that BLOOD FOR BLOOD was simply too ambitious. The task of writing felt crushing. It felt that way every day, for over a year; until I finally wrote THE END and hit send. Getting to that end was only possible through small steps. Scene by scene, chapter by chapter, I got the story down. There was a lot of research and rewriting and tears, but in the end, I did it.

I think the key takeaway for me was: writing books is hard, and some books are a lot harder than others. Don’t underestimate yourself.

I’m fortunate enough to be writing full time, so I try to fit my writing into normal work hours so I can spend time with my husband in the evenings and socialize with friends on the weekends. Depending on the stage, I spend 6-9 hours writing on any giving weekday. When I’m rough drafting, the hours are shorter, and I have a word count goal of a least a thousand words. Historical fiction takes a lot longer to write because of research. Hours and hours are spent seeking out information that sometimes never even makes it onto the page.

I often work from my office at home, but steal away to my favorite local coffee shop for company (and phenomenal pumpkin spice lattes). I do some of my best work in airports too, which is good, since I love traveling.

Something really fun! I’m going to be a tease because I’m not sure exactly how much I’m allowed to say at this point. After spending three plus years immersed in an alternate universe where Hitler won the war, I was ready to write something lighter. Something I could put jokes in and have fun with. Here are a few of the things my new project features: a red panda, Rubik’s cubes, Marie Antoinette, hair chalks, a boy without a birthday, an abundance of gelato. Make of that what you will!

The action-packed, thrilling sequel to Ryan Graudin's Wolf by Wolf.

For the resistance in 1950s Germany, the war may be over, but the fight has just begun.

Death camp survivor Yael, who has the power to skinshift, is on the run: the world has just seen her shoot and kill Hitler. But the truth of what happened is far more complicated, and its consequences are deadly. Yael and her unlikely comrades dive into enemy territory to try to turn the tide against the New Order, and there is no alternative but to see their mission through to the end, whatever the cost.

But dark secrets reveal dark truths, and one question hangs over them all: how far can you go for the ones you love?

This gripping, thought-provoking sequel to Wolf by Wolf will grab readers by the throat with its cinematic writing, fast-paced action, and relentless twists.

Ryan Graudin was born in Charleston, South Carolina, with a severe case of wanderlust. When she’s not traveling, she’s busy writing and spending time with her husband and wolf dog. She is the author of the All That Glows series, The Walled City, and Wolf by Wolf.

Have you had a chance to read BLOOD FOR BLOOD yet? Do you do a lot of research that never makes it onto the page? Do you get the story down in small steps when the task feels crushing? Share your thoughts about the interview in the comments!