New Releases this week 11/28 plus Giveaway of AVALANCHE 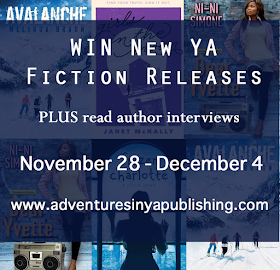 Two groups of teens—those waiting to be saved and those doing the saving—are in a race against time and a battle against Mother Nature after an avalanche traps them in an isolated cabin in this chilling novel.

“I promise it’ll be a weekend you’ll never forget.”

A trip like that is exactly what Matt was hoping for—a fun adventure. A daring escape. A once-in-a-lifetime opportunity to go cross country skiing in a thrilling but dangerous pass through the Rocky Mountains. The perfect way for Matt to forget about his disappointing father and maybe let loose a little with his best friend and a group of carefree adrenaline junkies.

But then their guide takes them off-path … and straight into an avalanche. By the time they make it safely into an abandoned cabin, one skier is dead and another severely injured. Trapped with no heat, no water, and no radio the group decides to wait it out. Help will come. It has to.

Until it doesn’t. And Matt knows if they wait any longer they’ll be dead—just another bunch of victims in Mother Nature’s twisted games. Armed with only a handful of supplies and his fierce determination Matt decides to goes head-to-head with the elements, battling hypothermia, frostbite, and even mountain lions in order to find help and save them all. That is if Mother Nature doesn’t kill him first.

Fate of Flames by Sarah Raughley: Any B.
Gap Life by John Coy: Ellie M.

All sixteen year old Yvette Simmons wanted was to disappear. Problem is: she has too many demons for that. Yvette’s life changed forever after a street fight over a boy ended in a second degree murder charge. Forced to start all over again, she’s sentenced to live in a group home far from anything or anyone she’s ever known. She manages to keep her past hidden, until a local cutie, known as Brooklyn, steps in. Slowly, Yvette lets him into her heart and he gives her the summer of her dreams...

But in Yvette’s world things are never as they seem.

Brooklyn has a few secrets of his own and Yvette’s past comes back with a vengeance. Will she face life head-on? Will she return to her old ways? Or will an unexpected letter decide her fate?

When fifteen-year-old Sophie's best friend dies abruptly under mysterious circumstances, Sophie sets off to stay with her uncle and cousins on the remote Isle of Skye. It's been years since she last saw her cousins -- brooding Cameron with his scarred hand; Piper, who seems too perfect to be real; and peculiar little Lilias with her fear of bones.

Sophie knows that in her uncle's house, there are rules she must follow: Make no mention of Cameron's accident. Never leave the front gate unlocked. Above all, don't speak of the girl who's no longer there, the sister whose room lies empty of all but the strange antique dolls she left behind.

As Sophie begins to explore the old house, a former academy for girls shut down long ago, she discovers unsettling secrets that shed light on a dark and dangerous history. But there are some secrets Sophie never expected to uncover. Secrets about her own family. Secrets that suggest Sophie may be in more danger than she could have ever imagined.

An exquisitely told, authentic YA debut about family secrets, the shadow of fame, and finding your own way.

Everyone in Phoebe Ferris’s life tells a different version of the truth. Her mother, Meg, ex–rock star and professional question evader, shares only the end of the story—the post-fame calm that Phoebe’s always known. Her sister, Luna, indie-rock darling of Brooklyn, preaches a stormy truth of her own making, selectively ignoring the facts she doesn’t like. And her father, Kieran, the cofounder of Meg’s beloved band, hasn’t said anything at all since he stopped calling three years ago.

But Phoebe, a budding poet in search of an identity to call her own, is tired of half-truths and vague explanations. When she visits Luna in New York, she’s determined to find out how she fits in to this family of storytellers, and to maybe even continue her own tale—the one with the musician boy she’s been secretly writing for months. Told in alternating chapters, Phoebe’s first adventure flows as the story of Meg and Kieran’s romance ebbs, leaving behind only a time-worn, precious pearl of truth about her family’s past—and leaving Phoebe to take a leap into her own unknown future.