Dean Hughes, author of FOUR-FOUR-TWO, on writers not taking themselves so seriously

We're thrilled to have Dean Hughes join us to share more about his latest novel FOUR-FOUR-TWO. 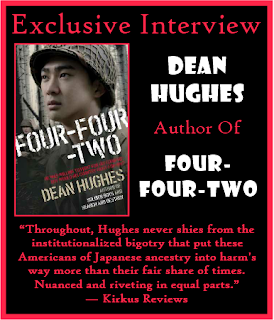 Dean, what scene was really hard for you to write and why, and is that the one of which you are most proud? Or is there another scene you particularly love?

As Yuki Nakahara, my main character, returns from war, he decides, during a train stopover, to get a haircut. He is wearing his army uniform with a Silver Star and a Purple Heart pinned on it, and yet a barber tells him that he will not cut “Jap hair.” Fortunately, a veteran in the shop doesn’t let the barber get away with such blatant discrimination, and Yuki’s humiliation turns into a moment of honor. The scene made tears roll down my cheeks with every draft, and I think it will touch young readers. But the painful truth is, that scene was based on actual events reported by returning Japanese American soldiers, and most of the barbers or waiters or bartenders who turned them away received support from customers in their establishments.

How long did you work on FOUR-FOUR-TWO?

I have been writing historical novels about World War II for almost twenty years. While researching, I often read about the accomplishments of the 442nd Regimental Combat Team, but I only started serious study of the unit a few years ago. After about half a year of reading everything I could locate on the subject, it took me most of another year to write the book and submit it to my editor, Emma Ledbetter. I knew I needed to do some additional revision, but thank goodness, Emma demanded my very best. After thinking that I was almost finished with the novel, I put in about eight more months, with many revisions and refinements. So I spent about two years working on the book.

I was born during World War II, so writing about that era takes me back to memories of my earliest years. I grew up with racial prejudice all around me, and I watched my inherited attitudes change during the civil rights revolution in America. I think our country has adjusted a good deal. The treatment of racial and religious minorities, women, people with disabilities, and the LGBTQ community has gradually progressed. But there are still deep remnants of prejudice in our nation, and I probed myself as I wrote this book to discover impulses that may still be imbedded in my psyche. Like Martin Luther King, Jr., I dream of a world where people are judged by their character, not their ethnicity, religion or gender. But it’s hard for all of us to stop fearing the “other.” Our latest danger is stereotyping the vast number of Muslims in the world. I am living in Lebanon right now, and it’s been wonderful to know and love so many Islamic people.

I seem to have discovered an endless “road to publication.” I have now published 102 books, I think it is. Or maybe it’s 103. The first two books I wrote were never published, and I’ve had a few turned down since then. But mostly, I can’t seem to break the habit of discovering new ideas and more subjects I want to write about. I’ve written sports novels, humorous middle-grade books, serious young adult stories, and a good deal of historical fiction. I’ve also written quite a few books for adults. I always think my next book will be my best, and I will be satisfied to retire and stop sitting so many hours at my computer. But by the time I finish a book I usually have three or four in mind. So on I go. I hope I don’t run out of life before I run out of things I want to write about.

I tell writers not to take themselves so seriously. What we do is sort of manual labor—or at least digital labor (that is, we work with our fingers). Too many writers assume a pose, pretend they’re deeper than others. The truth is, writing is hard work, is more about revision than inspiration, and the world might be better off if some of us quit filling bookstores with quite so many choices. (Not that I will take that advice in my own case.) When writers take themselves too seriously, their voices become false and they try too hard to be profound. We’re nothing more than storytellers, we writers, and we ought to be happy that anyone will listen to us.

My wife Kathy and I are actually living in Lebanon right now and will be for another year. We’re representing the humanitarian service arm of our church, teaching English to refugees and others who can improve their lives and work opportunities by learning our language. We’re not exactly young anymore, but we’re having fun, and life in the Middle East is a real adventure for us. We love the people we meet—and the sense that we’re playing a small part in a solution, not furthering the problems of the world. When we get back, I have another book started that I’ll return to. It’s about Mormon history—another subject I often write about.

From the author of Soldier Boys and Search & Destroy comes a thought-provoking, action-packed page-turner based on the little-known history of the Japanese Americans who fought with the 442nd Regimental Combat Team during World War II.

Yuki Nakahara is an American.

But it’s the start of World War II, and America doesn’t see it that way. Like many other Japanese Americans, Yuki and his family have been forced into an internment camp in the Utah desert. But Yuki isn’t willing to sit back and accept this injustice—it’s his country too, and he’s going to prove it by enlisting in the army to fight for the Allies.

When Yuki and his friend Shig ship out, they aren’t prepared for the experiences they’ll encounter as members of the “Four-Four-Two,” a segregated regiment made up entirely of Japanese-American soldiers. Before Yuki returns home—if he returns home—he’ll come face to face with persistent prejudices, grueling combat he never imagined, and friendships deeper than he knew possible.

Dean Hughes is the author of more than eighty books for young readers, including the popular sports series Angel Park All-Stars, the Scrappers series, the Nutty series, the widely acclaimed companion novels Family Pose and Team Picture, and Search and Destroy. Soldier Boys was selected for the 2001 New York Public Library Books for the Teen Age list. Dean Hughes and his wife, Kathleen, have three children and six grandchildren. They live in Midway, Utah.

Have you had a chance to read FOUR-FOUR-TWO yet? Do you have several books in mind by the time you finish the one you're working on? Do you avoid trying too hard to be profound? Share your thoughts about the interview in the comments!