Ashley Elston, author of THIS IS OUR STORY, on laying the groundwork for the rest of the story

We're thrilled to have Ashley Elston with us to share more about her latest novel THIS IS OUR STORY. 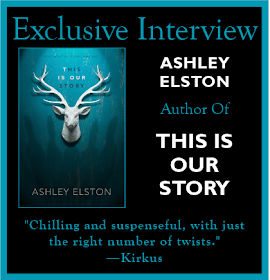 Ashley, what was your inspiration for writing THIS IS OUR STORY?

When I was in high school, I worked at my dad’s law office and got a behind the scenes look at what goes into every case. It was a pretty cool after-school job. But it wasn’t until my mom called a couple of years ago to complain about being picked for jury duty that the idea for this book clicked into place. I couldn’t quit thinking about how the outcome of most cases hinge on the “story” that gets told.

How long did you work on THIS IS OUR STORY?

​I wrote the first 10,000 words in a couple of weeks and submitted them to my editor for my option book. She loved it so I got to work finishing it. It took a couple of months to get a (rough!) first draft. We went through several rounds of edits that lasted about a year.

​The opening scene was probably the hardest to write and the one I'm most proud of. It's from the perspective of one of the River Point Boys, but the reader doesn't know which one, when one of their friends is found dead in the woods. This scene is so important because it lays the groundwork for the rest of the story. ​

What do you hope readers will take away from THIS IS OUR STORY?

I love a good legal thriller that keeps you up late at night because there’s no way you can sleep until you know whodunit! I hope THIS IS OUR STORY is that book for those that read it​.

​Haha! No! This is my third published book and I still feel like I have no idea what I'm doing sometimes!​

No one knows what happened that morning at River Point. Five boys went hunting. Four came back. The boys won’t say who fired the shot that killed their friend; the evidence shows it could have been any one of them.

Kate Marino’s senior year internship at the District Attorney’s Office isn’t exactly glamorous—more like an excuse to leave school early that looks good on college applications. Then the DA hands her boss, Mr. Stone, the biggest case her small town of Belle Terre has ever seen. The River Point Boys are all anyone can talk about. Despite their damning toxicology reports the morning of the accident, the DA wants the boys’ case swept under the rug. He owes his political office to their powerful families.

Kate won’t let that happen. Digging up secrets without revealing her own is a dangerous line to walk; Kate has her own reasons for seeking justice for Grant. As she and Stone investigate—the ageing prosecutor relying on Kate to see and hear what he cannot—she realizes that nothing about the case—or the boys—is what it seems. Grant wasn’t who she thought he was, and neither is Stone’s prime suspect. As Kate gets dangerously close to the truth, it becomes clear that the early morning accident might not have been an accident at all—and if Kate doesn’t uncover the true killer, more than one life could be on the line…including her own.

Ashley Elston lives is North Louisiana with her husband and three sons. She worked as a wedding and portrait photographer for ten years until she decided to pursue writing full time. Ashley is also a certified landscape horticulturist and loves digging in the dirt. Her debut novel, THE RULES FOR DISAPPEARING, was published by Disney Hyperion in 2013 and the sequel, THE RULES FOR BREAKING, in 2014. Her latest novel, THIS IS OUR STORY, will be published on November 15, 2016.

Have you had a chance to read THIS IS OUR STORY yet? Have you been inspired by an after-school job? Do you sometimes feel you have no idea what you're doing? Share your thoughts about the interview in the comments!