Amy S. Foster, author of THE RIFT UPRISING, on not worrying about good or bad, just getting it down

We're excited to have Amy S. Foster stop by to tell us more about her latest novel THE RIFT UPRISING. 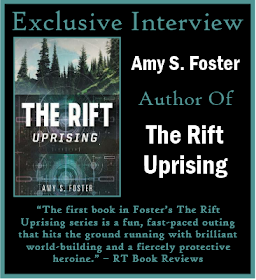 Amy, what was your inspiration for writing THE RIFT UPRISING?

Science! I love science and physics in particular. I also wanted to write a book specifically for my daughter’s age group 15 and older. I’m trying to find a subgenre to call this. Mature Teen sounds weird. Driver’s Licensed And Older?

I think the scene when Ryn finally figures out what’s going on and what’s been done to her. She let’s go and drops her guard. Writing Ryn’s version of vulnerable was hard, as was the subject matter. I feel like I accomplished this in a way that stayed true to who she is- a soldier. To that end, I’m also proud that I got her, as a soldier and leader right. At least that’s what my military advisor says and that means a lot to me.

The Hunger Games is an obvious one but, I would also put Legend by Marie Lu on that list and Laini Taylor’s The Daughter Of Smoke and Bone. But, I’m also old school, so I’m going to say Forever by Judy Blume.

How long did you work on THE RIFT UPRISING?

The first draft took about 6 months. There were many drafts though, so a little over a year altogether.

I have never been so grateful for my wild imagination. I mean, I have some pretty out there ideas! It served me so well when I was building this world.

What do you hope readers will take away from THE RIFT UPRISING?
Never stop asking questions. Never abandon curiosity. And, if in your gut something feels wrong, don’t ignore that. Rock the boat. Look for answers even if they might be painful. Information is power.

Great question. I wrote a book in 2009 that did pretty well and I wrote 3 sequels that I couldn’t get a publisher to touch. I trashed those MS’s and started working on another sequel that took a different direction. I couldn’t get that one published either! The Rift Uprising was easy. I couldn’t believe how fast it went. Once it went out for submission, I think it was like two weeks, maybe? There was a bit of a bidding war. I couldn’t believe it, especially since so many publishers with those other manuscripts which were sequels to a book that did pretty well.

You know, it’s weird- the story came all at once and I just outlined it and went. It wasn’t until I began outlining book 2 where I went okay! Here we go! THIS is the bigger picture. I knew there was a fair bit I could get away with in Book One in terms of waffling as to who the big baddie was and just who exactly Ryn was fighting and why. It makes sense. I was in the dark, just like my protagonist during the first book. So ultimately, I had to know what Book Three looked like as I was writing the second one. As I was outlining there were many, many AHA moments.

I have a condo close to my house that I go to every day during the week just like a regular job. It’s heaven! I have so many kids that the time away from home is vital to getting into the right headspace. I often listen to instrumental soundtracks from films. It’s great. I can really “see” a scene unfold in my head as I write.

Book 3! Well, I’m promoting The Rift Uprising but I’m writing the last book. I expect that in a month or two I will have to put that on hold as I edit Book 2. Basically, it’s all Rift all the time.

An alternate reality that feels all-too-real, The Rift Uprising is the explosive start to a new trilogy that combines the fast paced action of Suzanne Collins’ Hunger Games, the lyrical tone of Laini Taylor’s Daughter of Smoke and Bone, and the emotional stakes of Pierce Brown’s Red Rising from acclaimed lyricist and storyteller Amy S. Foster.

Normal seventeen-year-old girls go to high school, binge watch TV shows all weekend, and flirt with everyone on the face of the Earth. But Ryn Whitaker is trying to save it.

Ryn is a Citadel. A soldier. A liar. Ryn and her fellow Citadels were specially chosen and trained to guard a Rift—one of fourteen unpredictable tears in the fabric of the universe that serve as doorways to alternate Earths. Unbeknownst to her family, Ryn leaves for school each day and then reports for duty as an elite, cybernetically-altered soldier who can run faster, jump farther, and fight better than a Navy SEAL—which comes in handy when she’s not sure if axe-wielding Vikings or any number of other scared and often dangerous beings come through the Rift. A fine-tuned weapon, Ryn is a picture-perfect Citadel.

But that’s all about to change.

When a young man named Ezra is pulled through the Rift, Ryn finds herself immediately drawn to him, despite her training. What starts as a physical attraction quickly grows deeper, and Ezra’s curiosity throws Ryn off balance when he starts questioning the Rifts, the mysterious organization that oversees them, and the Citadels themselves—questions that lead Ryn to wonder if the lies she’s been telling her family are just the surface of a much bigger lie told to her. As Ryn and Ezra desperately try to get to that truth, they discover that each revelation blurs the line between the villains and the heroes even more. 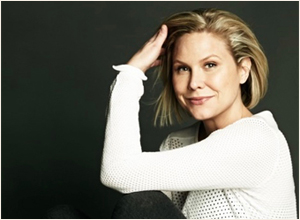 Amy S. Foster was born in Victoria, Canada to singer B.J. Cook and legendary record producer David Foster. But Amy opted out of a career in music and chose international business instead. While going to American University in Washington DC, she took a course in creative writing with renowned poet Ann Darr that would change the direction of her life. After graduating, Amy moved to London to hone her literary skills, determined to get a collection of her own poetry published. It was there that she met producer Martin Terefe (Mike Posner, Shawn Mendes, James Morrison) who asked her if she wanted him to put some music to her poetry. The two made a ground breaking spoken word record which turned Amy’s focus entirely to music and from there, the progression to becoming a lyricist was natural. Since then, artists have sought out Amy’s easy, conversational style of writing and her uncanny ability to help them tell their own stories. She has penned four number one hits with Michael Buble (Home, Everything and Haven’t Met You Yet, Beautiful Day). “Home” has also been covered by Westlife and Blake Shelton which gave Amy her first country Number One. She has worked with artists such as Andrea Bocelli, Destiny’s Child, Solange Knowles, Eric Benet, Diana Krall, Josh Groban, One Flew South, Carolyn Dawn Johnson, John Paul White of The Civil Wars, RyanDan, Who is Fancy, Chris Mann, and most recently a collaboration with Michah Wilshire of the band Wilshire. The two have formed their own group called QOINS .

“When Autumn Leaves”, Amy’s first work of fiction was published by The Overlook Press in September 2009. Currently, Amy lives in Portland, OR with her husband Matt Freeman and their three children, Mikaela, Eva and Vaughn. Her next release is, the first in The Rift Trilogy, for Harper Collins is coming to a bookstore near you in the Fall of 2016.

Have you had a chance to read THE RIFT UPRISING yet? Can you 'see' a scene unfold in your head as you write? Do you get stuff down so you'll have something to fix? Share your thoughts about the interview in the comments!