We're thrilled to have Suzanne Weyn stop by to tell us more about her latest novel BIONIC. 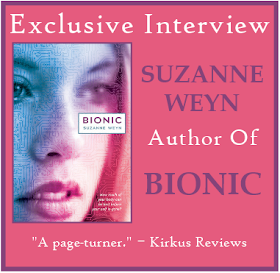 Suzanne, what was your inspiration for writing BIONIC?


There were several inspirations. One of them came when I wrote the novel Dr. Frankenstein’s Daughters. I became very interested in the science being done at the time Mary Shelly wrote Frankenstein. There were so many fundamental questions being asked. Is a person more than the sum of his or her parts? If human parts are replaced, is a completely new entity created? And by extension, if those parts are prosthetic, at what point does the original person still exist?

I also became intrigued with the increasingly blurred line between human and cyborg. Cyborg’s are becoming more human, with the capacity for artificial intelligence extending into the realm of emotional intelligence, while at the same time, science advances at a rapid pace to replace human limbs, internal organs, and even implant chips to enhance brain function. DNA manipulation offers the chance to eliminate disease and even enhance human ability. What is the emotional consequence to these enhanced human beings? And where is the line between cyborg and human?

And then there is the “Ship of Theseus” paradox which asks how much of something can be changed until that which is changed is no longer itself. How much of my protagonist, Mira, can be replaced until she is no longer Mira, but someone/something else entirely?


The lake near Mira’s home comes up repeatedly. I did this to juxtapose the force of the natural world with the power of the technological world. I was inspired in this partly by E. B. White’s short story, “Once More to the Lake.” And even more strongly by Lake Oceana near my home which is a huge part of my life and that of my family. I feel continually grounded to the earth by the close contact with nature that comes from living so closely with the lake.


The scene of which I’m most proud is when Mira returns to the lake after being so badly injured. It’s the turning point when after months of depression and pain, she decides to swim and grow strong again. It’s where she tells the reader that like the birds that sing to reclaim their territory every morning, she has not disappeared during the night.

What do you hope readers will take away from BIONIC?

My first hope for my readers is always that I have told an engaging, thought-provoking story. I hope they’ve connected to my characters in a real way that elicits compassion both for others and for themselves so that when they encounter similar situations of this kind—an increasingly, they will—they have this story to fall back on with empathy.

I work at home. Even sitting in my yard is too distracting to me. I need solitude. Music is too distracting. I write five days a week most weeks. I work approximately five hours a day. My brain doesn’t really get going until about noon, so I do mundane tasks until around noon and then I begin to write. The first hour I sometimes edit and even re-write the last chapter I worked on. Generally the last thing I wrote could stand to be changed because I was getting tired when I wrote it and it wasn’t my best work any longer. Re-writing also warms up my brain. It also gets me going because it’s a way to start that is a little less taxing than creating something from thin air. I write until about 7:00pm. By then I’m hungry and my brain is friend, so it’s a good stopping point.

Stretch yourself! Nothing you write is stupid. Write about the things you daydream about. Just writewritewritewrite. Practice makes improvement.

Mira has always almost had it all... until it all crashes and burns. She's hurt in a horrible car accident, and the only way the doctors can help is to try experimental prosthetics and chips that are implanted directly into her brain. It's a huge risk, but after months of testing and therapy, Mira is back, and better than ever.

But soon her friends turn against her as their parents call her on unfair advantages and get her cut from lacrosse and the scholarships she was depending on for college. And with her enhanced hearing, she knows how many people in her school and her town are calling her a robot, a cyborg.

Is that true? Is Mira human, or is she somehow something other? How can she overcome the ways people see her and just be herself... especially if she's not really sure who that is anymore?

Suzanne Weyn is always at the cutting edge when it comes to new tech and the questions it raises about the world we live in.

Suzanne Weyn grew up in Williston Park, Long Island, New York. She has three sisters and a brother. As a girl she was very interested in theater and in reading. Louisa May Alcott was her favorite author, but she also read every Sherlock Holmes story. Suzanne lived pretty close to the ocean and going to Jones Beach was one of her favorite activities Even today, if she goes too long without seeing the ocean, she starts feeling restless.

Suzanne now lives in upper New York State with her husband, two teen daughters and Abby the cat. Her house is at the edge of the woods and is nearly 200 years old. She graduated from State University of New York at Binghamton and received her Masters degree from Pace University. She teaches part time at City College in New York.

Suzanne’s other books for Simon Pulse include South Beach Sizzle, a romantic comedy written with Diana Gonzalez. Her novels for the Simon Pulse line, “Once Upon a Time” are The Night Dance; a Retelling of the Twelve Dancing Princesses, Water Song: a Retelling of the Frog Prince, and The Crimson Thread: a Retelling of Rumplestiltskin. She very much enjoys rethinking these classic tales from an original point of view, always looking for the real psychological underpinning of the story. Suzanne is currently doing revisions on her fourth book in the line, which will be coming in '09.
Suzanne’s other recent novels are include The Bar Code Tattoo (2004) and its sequel. The Bar Code Rebellion (2006). The Bar Code Tattoo was selected by the American Library Assoc. (ALA) as a '05 Quick Pick for Reluctant Young Adult Readers and was a ’07 Nevada Library nominee for “Best Young Adult Fiction”. It is currently translated into German and was nominated for the '07 Jugenliteraturpreis for Young People’s Literature.

Have you had a chance to read BIONIC yet? Do you re-write as a warm up to writing? Do you write about the things you daydream about? Share your thoughts about the interview in the comments!