Stephanie Kate Strohm, author of IT'S NOT ME, IT'S YOU, on ensuring each character has a very distinct voice

We're excited to have Stephanie Kate Strohm here to chat about her latest novel IT'S NOT ME, IT'S YOU? 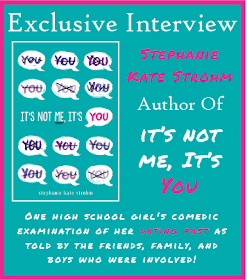 Stephanie, what was your inspiration for writing IT'S NOT ME, IT'S YOU?

My brilliant editor at Scholastic, Matt Ringler, came up with the idea to write a YA love story told as an oral history, and he provided the jumping off point of someone interviewing her ex-boyfriends. Then Avery emerged into my brain fully formed as a character, and took over from there. She’s very bossy.

I really love the scenes with Hutch (Avery’s lab partner) and his Dungeons & Dragons friends. I haven’t written a lot of male friendships before, so it was a bit of a challenge but also something I’m proud of.


Because this book is in the format of an oral history, it taught me a lot about voice, and ensuring that each character has a very distinct voice – otherwise, things get confusing, fast!

What's your writing ritual like? Do you listen to music? Work at home or at a coffee shop or the library, etc?
Sometimes I like to work at home with my dog, mostly listening to Dolly Parton on Spotify, drinking lots of tea. Sometimes I like to work at the Grind, a coffee shop in my neighborhood, or at Bang Bang Biscuits and Pie (also in my neighborhood in Chicago), because they have the best writing snacks.

I’m working on THE DATE TO SAVE, a follow-up to IT’S NOT ME, IT’S YOU coming in Fall of 2017 – get ready for the craziest Homecoming EVER!

One high school girl's comedic examination of her dating past as told by the friends, family, and boys who were involved!

Avery Dennis is a high school senior and one of the most popular girls in her class. But a majorly public breakup with the guy she's been dating causes some disastrous waves. It is right before prom and Avery no longer has the perfect date. She runs the prom committee, how could she not show up with somebody?

Post-breakup, Avery gets to thinking about all of the guys that she has ever dated. How come none of those relationships ever worked out? Could it be her fault? Avery decides to investigate. In history class she's learning about this method of record-keeping called "oral history" and she has a report due. So Avery decides to go directly to the source. Avery tracks down all of the guys she's ever dated, and uses that information, along with thoughts from her friends, family, and teachers, to compile a total account of her dating history.

Avery discovers some surprises about herself and the guys she's spent time with -- just in time for prom night!

Stephanie Kate Strohm is the author of The Taming of the Drew, Pilgrims Don't Wear Pink, Confederates Don't Wear Couture, and the upcoming It's Not Me, It's You and Prince in Disguise. She grew up in Connecticut and attended Middlebury College in Vermont, where she was voted Winter Carnival Queen. Currently she lives in Chicago with her fiance and a little white dog named Lorelei L.

Have you had a chance to read IT'S NOT ME, IT'S YOU yet? Have you tried writing a story with an unusual format? Do your characters tend to take over your stories? Share your thoughts about the interview in the comments!