Six things I'd tell myself...

We're so grateful to Gaby Triana, author of WAKE THE HOLLOW, for stopping by today to share
six things she'd tell herself if she could go back into the past.

"For most authors, however, the love of the art comes with downsides. Think of them as occupational hazards, the thorns that accompany the beautiful roses."

We all have dreams of making it big, raking in the big bucks, releasing book after book, as bookstores fawn over you, and fans line up for a chance to get their tattoos signed.

Okay, no. It’s not like that. Well, not for everybody, but if you’re lucky enough to have everything work out for you like magic, then *cue applause.* If I could travel back in time 15 years and tell newbie author Gaby a few things, here’s what I would say:

Unless you’ve become an overnight sensation with a 7-figure movie deal, do not. I don’t care if you got a 3-book deal with a major publisher, unless you have some other means of support (and if you do, I’m jealous, but super happy for you), then don’t quit. Because writing may pay the bills today but what about tomorrow? Freelance writing, like freelance anything, is flitting at best, so make sure you have a backup. Yes, I sound like your mom. Yes, that terrifies me. But Mom is always right.

Ignore them. If you can’t completely ignore reviews altogether, and you’re like me and HAVE to read them, then don’t let that one review get you down. Of course, you want everyone to love your book, but not everyone likes steak either, and if there was a review site for steak, at least one person will say a certain steak sucks, even if they know nothing about steak. Even if they haven’t finished said steak and only had one bite of it. Even if they are in the presence of a steak that took a really long time to write, er marinate, they still may not like it. So what. It’s not personal. There are 99 other reviews by people who loved your book. So move on.

3. You will be doing most of your own promotion.

I cringe when writing this, because it sounds critical of your publishing house, but it’s not. It’s just a simple fact—nobody’s going to care about your book the same way you do. They may begin to promote your book, but if there’s not enough ROI (return on investment) for them, then they’re not going to shell out more money. You wouldn’t either if you were them. Writing may be an art, but publishing is a business. They have to make money before they will spend more on promotion. Do your part and get a street team, people who love to spread the word for you, wrangle social media for you, and get the word of your book out. Have an online presence. Don’t just talk about your book, but get on there and share stuff, be funny, attract attention, but in a good way that makes people want to come back and see what you’re up to today. If you got into writing because you were a quiet kid who was too shy to talk to people, guess what? YOU’LL BE TALKING A LOT!

The worst thing you could do for your writing career is only put out one book. It’s an overused cliché, but it’s based on truth—writers write. Yes, they do. There’s more than one story in you, and you love writing, don’t you? So get back to your laptop and tap those stories out. The more you write, the more chances you’ll sell again, the more readers you’ll have, the more feedback you’ll get, the more money will come in. No one wants to be accused of being a one-hit wonder, so keep writing. All that time you waste checking your Amazon rankings could be spent knocking out the next bestselling novel.

I know this sounds trite, but it’s true. The moment you say, “forget it, I can’t do this anymore,” is the moment your career ends. It will be tough. There will be days to drive you straight to the beer & wine section at the supermarket, but that’s fine. Feel sorry for yourself for about a day. Eat your chocolate. Watch your Netflix. But then, shake it off and tell yourself the next day that you have learned from this experience. That you are now a billion times stronger (even if you don’t feel it). Tell yourself that everyone who made it in this career has been tested in much the same way, so if you can’t get through these times, you can’t reach that goal. Eyes on the prize, Violet, eyes on the prize.

The prize is readers. From the very beginning, people have been asking me, “Why do you do write? Isn’t it hard getting rejected?” Um, no. Because there’s rejection in everything you do. It’s the only way to reach the people who truly matter—your audience, your readers, your fans, your tribe, your people. The ones who read your book and write reviews like, “This was ambitious, creepy as hell, and highly bizarre, but somehow it works.” They’re the people you stay up late for, the ones who love a good story, the ones who admire you because though they love to read, they don’t all know how to write, to execute.

"You are the only one who can tell your story the way it needs to be told, so suck it up and get to work. Have fun doing it. And then, just before you complain about how hard it is, look around your house, look at your empty ice cream bowl, while still wearing your jammies, and remind yourself you have the best job in the world." 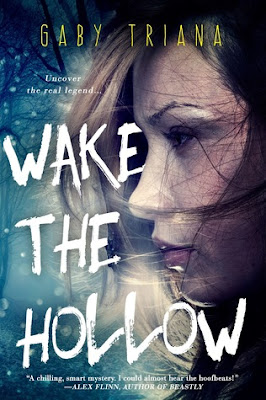 Tragedy has brought Micaela Burgos back to her hometown of Sleepy Hollow. It’s been six years since she chose to live with her father in Miami instead of her eccentric mother. And now her mother is dead.

This town will suck you in and not let go.

Sleepy Hollow may be famous for its fabled headless horseman, but the town is real. So are its prejudices and hatred, targeting Mica’s family as outsiders. But ghostly voices carry on the wind, whispering that her mother’s death was based on hate…not an accident at all. With the help of two very different guys—who pull at her heart in very different ways—Micaela must awaken the hidden secret of Sleepy Hollow…before she meets her mother’s fate.

Unless, of course, the answers find you first. 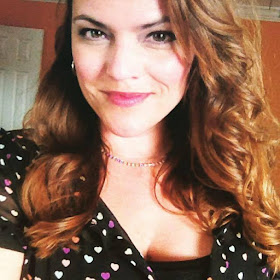 GABY TRIANA is the award-winning author of six YA novels—Wake the Hollow (Aug. 2016, Entangled), Summer of Yesterday, Riding the Universe, The Temptress Four, Cubanita, and Backstage Pass, as well as thirteen ghostwritten novels for best-selling authors.

Originally a 4th grade teacher with a Master of Science in Elementary Education and ten years teaching experience, Gaby earned Teacher of the Year in 2000, wrote her first novel, Freddie and the Biltmore Ghost, then left teaching to launch a full-time writing career. She went on to publish young adult novels with HarperCollins and Simon & Schuster, win an IRA Teen Choice Award, ALA Best Paperback Award, and Hispanic Magazine’s Good Reads of 2008.

She spends her time obsessing about Halloween, Christmas, and Disney World, as well as hosting parties, designing mugs, making whimsical cakes, and winning costume contests. When she’s not writing, she might also be watching Jurassic Park movies with her boys, posting excessive food pics on social media, or helping run the Florida region of the SCBWI. Gaby lives in Miami with her three sons, Michael, Noah, and Murphy. She has one dog, Chloe, and two cats—Miss Daisy, and the reformed thug, shooting survivor, Bowie.

Gaby is the author of WAKE THE HOLLOW.