S. D. Grimm, author of SCARLET MOON, on acting out fight scenes with a wooden spoon

We're thrilled to have S. D. Grimm stop by to tell us more about her debut novel SCARLET MOON. 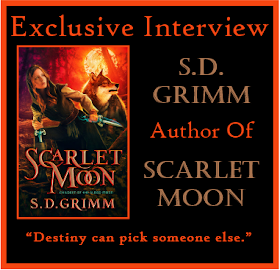 S. D., what was your inspiration for writing SCARLET MOON?

Animals. I love animals, and I always wanted to be Dr. Doolittle. I loved reading Watership Down and Redwall, and I wanted to write a story with animal characters being important to the whole story. So I thought, what if there was this race of people who could bond with and talk to certain animals? Then, what if they got certain abilities from these animals. For example, bonding to a wolf could give you really good hearing. And bonding with an eagle would give you really great eyesight. Oh! And why stop there? What if bonding to a unicorn gave you the ability to heal others? Then I built a world and a story around a few characters who bonded with certain animals and used the gifts they had to make everything unique.

I am really proud of my fight scenes. I know that sounds weird, and there are a lot of other hard-to-write scenes that caused serious soul-searching and soul-pouring, but I love my fight scenes. They really sucked at first (can I say that here?). I mean, my critique partners were like, “Um, Sarah, I can’t follow this scene. Did you map it out?” And I was like, “no.” So I read some craft books. And a lot of fight scenes. (Some were super boring!) And I started to learn about weapons and movement. But also I got deep into my characters’ heads. What made them fight? What were they feeling? Did their brains slow down a terrifying moment like mine does? What did the ground feel like? What did they have time to focus on? And I acted it out—sometimes with a wooden spoon in the kitchen while cooking dinner—and I felt their fear, their rage, their need to survive. And I wrote it. And I loved it. And my editors did too.

Ooh! Graceling. Shadow and Bone. Storm Siren. And while Shiver doesn’t have any common plot with Scarlet Moon—except that there are wolves—I remembered thinking that the main characters reminded me of my main characters.

How long did you work on SCARLET MOON?

From story conception to publication date will be seven years. Now, I’ve written a lot of other stuff in that amount of time too, but in that time, I kept learning and revisiting Scarlet Moon for a tweak or a revision or to query it or submit it, etc. And let me tell you, after working on something for seven years and then not being able to make any more tweaks and changes, it’s a brand new feeling. Scary and freeing at the same time.

So many things. I believe in God, so the creative process really helped me to see how creativity and art in general is more integral to human beings as we think sometimes. People oftentimes pass off the arts as not as important. They tend to be electives in school and majors that in college that don’t lead to real jobs. But I think something important is overlooked. Not everyone has the same type of creativity, but I think creativity is a part of being human. And I think we should embrace our creative sides, not be embarrassed of them.

What do you hope readers will take away from SCARLET MOON?

Persevere. Love—real love—has the power to change hearts. And that understanding our weaknesses brings us closer to realizing our strengths.

I started writing as a kid. For a fun, creative outlet. After my first child was born, I decided I wanted to work from home and I’d go back to writing. That was seven years ago. I had three books already written—from that middle school through college phase—but I decided to be serious about publication. So I hid those books in a figurative drawer and I wrote Scarlet Moon. And then I learned about querying. Then I learned about writing craft. So I rewrote Scarlet Moon. I went to conferences. I wrote another book. I wrote short stories and flash fiction. Those stories started to get accepted into publications. I read more about craft, took online classes, got feedback from critique partners, went to more conferences, and entered contests.

The new book I wrote and Scarlet Moon both started winning contests. They started getting requests. Then good rejections. Then Scarlet Moon got three publishers to offer a contract. And the other novel I wrote got two agents to offer representation. Now I have a publisher and an agent and a lot more books in me. It took seven years, but now I’ve written (not counting those first three) four novels, two novellas, several short stories and pieces of flash fiction (many of which have been published), and I’ve started three more novels. So, yeah, I’m happy with the road so far with all its bumps and bruises. And there are a lot of those. You’ll feel like you’ll never make it. You’ll want to quit—more than once. You’ll decide everything you’ve ever written is crap. But even if all of that happens and you still need to write, then persevere. Keep writing. Keep learning. Keep growing.

It varies . . . Sometimes I sit at my computer and end up distracted. Sometimes I pound out 10K words in a day. Usually it’s something in between. The important part is showing up to work.

I love listening to music while I write—not while I edit. I sit at my desk in the basement (or my laptop wherever). My dogs usually join me. I write fantasy so I have a collection of dragons, gryphons, and funko pop characters on my desk to cheer me on. I try and hit a target word count six days a week. And the seventh day, I usually end up writing, too, because I love it.

Persevere. Learn from everything. Anytime you can look at a situation as another step in the right direction and learn from it, you’re heading closer toward your goal. And hire an editor.

I’m getting ready to send the final book in the Children of the Blood Moon series (of which Scarlet Moon is the first) to my editor. It’s going to be really different to not work with these characters anymore, but I already have three other story ideas waiting. My agent and I are still feeling out which one will get the forefront, but let’s just say I’ve started all of them. A YA cyberpunk, a YA time travel/urban fantasy, and a NA Viking story with some Magical realism. Yeah, I want to write them all. Right now.

The hunted Feravolk are counting on Jayden, a seventeen-year-old, dagger-wielding, storm-detecting orphan, to save their race. Maybe they should have thought of that before they killed her family.

The land of Soleden is dying because the sorceress queen hunts and kills the people who cared for all nature, the Feravolk. Through their special bond with animals, the Feravolk have become more than men. Faster, stronger, masters of camouflage and stealth. Only a Deliverer born the night of the Blood Moon can save them from extinction.

According to prophecy, Jayden is a Deliverer, but it’s not a destiny she wants. She has no sympathy for either side. The Feravolk killed her family, so they can die for all she cares. And fighting the queen with nothing but daggers and her special abilities—storm predicting—is a suicide mission. Destiny can pick someone else.

Except hiding from destiny proves difficult; Deliverers attract powerful Protectors. Jayden’s is one of the Feravolk, so he can’t be trusted. But he makes her feel safe. Makes her want to save his race. If she chooses to keep hiding, he’ll remain one of the hunted, but he’ll protect her even if it means his death if she faces the queen. Making the right choice has never been so excruciating, especially since the prophecy says nothing about the Deliverer’s success, or survival.

S.D. Grimm’s first love in writing is young adult speculative fiction—everything from urban fantasy to epic fantasy and space operas to superheroes. She is represented by Julie Gwinn of the Seymour Agency, and her debut novel, Scarlet Moon, releases October 2016 through Enclave Publishing (an imprint of Gilead Publishing). Her office is anywhere she can curl up with her laptop and at least one large-sized dog. When she’s not writing or freelance editing, Sarah enjoys reading, kickboxing and Brazilian jiu jitsu, fencing, and Netflix bingeing. You can learn more about her and her upcoming books at www.sdgrimm.com.

Have you had a chance to read SCARLET MOON yet? Do you keep writing, learning, and growing? Do you have theme appropriate characters cheering you on? Share your thoughts about the interview in the comments!