Pintip Dunn, author of REMEMBER YESTERDAY, on realizing "I am a writer"

REMEMBER YESTERDAY is the second book in the Forget Tomorrow series, and we're excited to have Pintip Dunn stop by to chat about it.

Pintip, what was your inspiration for writing REMEMBER YESTERDAY? 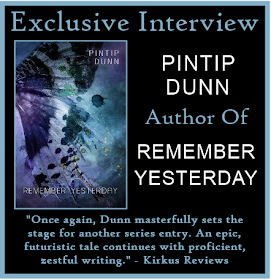 REMEMBER YESTERDAY is a sequel, so I'll talk about my inspiration for the FORGET TOMORROW series!

I had been writing seriously for years and was getting frustrated with the publication process, namely the rejections. My editor friend sent to me: "I wish I had a crystal ball. Then, I could tell you five years from now, you will definitely be published and you wouldn't worry about it so much."

A few days later, I was taking a nap with my toddler son and in that hazy state between being asleep and awake. "Wouldn't it be great," I thought, "if we could send memories to our younger selves? Then I could see myself as a successful author and know that all this sweat and blood and tears were worth it." My next thought was: "Hey, that would make a great idea for a book!" And presto: FORGET TOMORROW was born.

I have wanted to be an author since I was six years old, and I have gotten many, many rejection letters. Between agent and editor submissions, I believe I received nearly 150 rejections, on five different books, before I got my first contract.

Rejection is hard, especially when it is for something into which you have poured your heart and soul. In the last fifteen years, I have wanted to quit writing many times. But an interesting thing happened a few years ago. I realized that no matter how the outside world responds, whether or not they like my books, I am a writer. That's who I am. I can no sooner change that fact than I can change my skin color or my race. So rather than waste so much time thinking about quitting, I should just accept the fact as a given and move on. Coincidentally (or not), one year after I came to this conclusion, I received an offer for my first book. I then sold six more books in the next seven months and then a novella later on. Of all the books I have written, three of them will never see the light of day.

Persevere. The path to publication can be long and hard, but the difference between a published and unpublished writer is that the published one didn't give up.

I am writing book 3 of the FORGET TOMORROW series, which is entitled SEIZE TODAY. This book will be released in October of 2017.

I'm also super excited about my YA contemporary thriller, which will be released in July of 2017. GIRL IN BETWEEN is about a Thai-American girl who is caught between cultural worlds, and what happens to her when a stalker comes in and tries to steal her identity. Seventeen-year-old Jessa Stone is the most valuable citizen in Eden City. Her psychic abilities could lead to significant scientific discoveries -- if only she'd let TechRA study her. But after they kidnapped and experimented on her as a child, cooperating with the scientists is the last thing Jessa would do.

But when she discovers the past isn't what she assumed, Jessa must join forces with budding scientist Tanner Callahan to rectify a fatal mistake made ten years ago. She'll do anything to change her past -- even if it means aligning herself with the enemy she swore to defeat.

Have you had a chance to read REMEMBER YESTERDAY yet? Have you been tempted to quit writing? What keeps you going? Share your thoughts about the interview in the comments!