Martina Boone, author of ILLUSION, on not letting doubt bury you

We're especially delighted to have Martina Boone with us today, since she's the lovely founder and blog manager of Adventures in YA Publishing. Check out what she has to say about about ILLUSION, the final book in the Heirs of Watson Island trilogy. 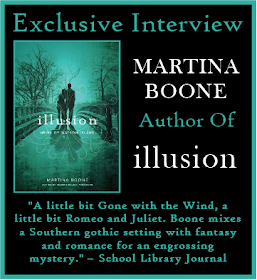 Martina, what was your inspiration for writing ILLUSION?

In ILLUSION, I finally get to bring in what was at the heart of my inspiration for the entire trilogy, the character of Eliza Watson Beaufort. She’s based on the real-life Eliza Lucas Pinckney, who at the age of seventeen at the turn of the eighteenth century ran three plantations for her absent father and founded the American indigo industry, which became the third largest economic export from the Colonies prior to the Revolutionary War. Did I mention she was a girl? Where was THAT in the history classes that I took in high school or college? I would have paid more attention.

Coming to the United States as I did from a communist country, I was always aware of how history changes according to what the people in charge want you to know. But it honestly hadn’t occurred to me how much had been erased in U.S. history until I began to research Eliza and discovered how little we knew about the roles of the women, Native Americans, and African Americans who shaped this nation. It was the commonalities between their struggles and their erasure that helped me create the curses and the magic of Watson Island, and helped me plant the threads of all the secrets and mysteries that carried from Eliza’s time through until the present day when Barrie is living (and trying to survive) through their dangerous aftermath.

There’s a scene when everyone in the four families of Watson Island is trying to lay the curse at Colesworth Place—and I say four families, because in ILLUSION, you finally discover the full importance that Mary, Daphne, and Obadiah play in the story. The scene is filled with fear and stubbornness, with pride and sorrow and anger. It’s a scene that brings together what the Colesworths did to their slaves, and what the Colesworth descendants and the descendants of the slaves feel about that. This was an almost impossible scene for me to write, because how was I qualified to even begin writing it? In essence, I spent three years working on that scene, and it finally came to me that I wasn’t writing about the descendants of every slave owner and the descendants of every enslaved person—I couldn’t look at it like that and measure up my failings against that. I could only write about what Cassie and Mary and Daphne and Obadiah felt and were willing to share with each other. I could only write about Barrie’s growing awareness of what all these things meant. I can’t be certain that I got it right for anyone but them, but I captured what those characters needed to say in that moment and in that place. Though I’ll never feel like there is a way to do the topic justice, I hope that I did, for these specific characters, what needed to be done. I don’t know if I can be proud of that scene. No one should be proud of something like that. But it’s the scene I worked on the hardest and worked the hardest to get right, speaking with countless people, doing months worth of research, and begging people who had more right to speak on the topic than I do to read bits and pieces as well as the whole.

My favorite scene? I have two. The reconciliation scene between Barrie and Eight where they dance in the kitchen, and the scene in which Barrie finally understands the magic that’s all around her.

It’s kind of GILMORE GIRLS meets HART OF DIXIE meets SUPERNATURAL. Or BEAUTIFUL CREATURES meets THE RAVEN BOYS.
How long did you work on ILLUSION?

It’s the last book in the trilogy, so really three years, but basically the full year once the writing was done on PERSUASION.
What did this book teach you about writing or about yourself?

Writing doesn’t get any easier as time goes on. That surprised me. If anything, it’s harder because you know enough to know what you don’t know and enough to recognize where you’re falling down. There were days writing this where I thought I couldn’t pull it off and couldn’t go on with it, which is the bane of any creative endeavor. I think every creative person lives with self-doubt and bouts of depression.
What do you hope readers will take away from ILLUSION?

There really is a little bit of magic everywhere and in everyone, we just have to look deep enough to find it in ourselves and in the people who seem different from us. Reaching out a hand to bridge divides is the only way we’ll all move forward together.

Don’t let doubt bury you. As writers, we can’t measure ourselves against the people who’ve written our favorite books, or bestselling books, or any other books. And we can’t second guess how a book is going to be received.

Every manuscript we put out in the world is an offering. We give it and we release it, and we hope that what was in our hearts translated well-enough onto the page that a few other people will connect with it. But stories are pieces of ourselves; they’re not our whole selves. We have to let ourselves live full lives, not only our creative ones. We have to engage in the world and derive our self-worth from living as well as creating.

Several things, including a high fantasy with some sci-fi elements and a thriller that I’m writing with the lovely Erin Cashman. Barrie must rescue her beloved and her family from evil spirits in the masterful conclusion to the Heirs of Watson Island trilogy.

Martina Boone was born in Prague and spoke several languages before learning English. She’s the acclaimed author of the romantic southern gothic Heirs of Watson Island series, including Compulsion (Oct ’14), Persuasion (Oct ’15), and Illusion (Oct ’16), from Simon & Schuster, Simon Pulse. She’s also the founder of AdventuresInYAPublishing.com, a three-time Writer’s Digest 101 Best Websites for Writers Site, and YASeriesInsiders.com, a site dedicated to encouraging literacy and reader engagement through a celebration of series literature. She’s on the Board of the Literacy Council of Northern Virginia and runs the CompulsionForReading.com program to distribute books to underfunded schools and libraries.

She lives with her husband, children, and a lopsided cat, she enjoys writing contemporary fantasy set in the kinds of magical places she’d love to visit. When she isn’t writing, she’s addicted to travel, horses, skiing, chocolate flavored tea, and anything with Nutella on it.

Have you had a chance to read ILLUSION yet? Have you been inspired by a little known historical figure? Do you live a full life rather than just a creative one? Share your thoughts about the interview in the comments!