Laurie Faria Stolarz, author of SHUTTER, on the benefits of joining a writers group

We're excited to have Laurie Faria Stolarz join us to chat about her latest novel SHUTTER. 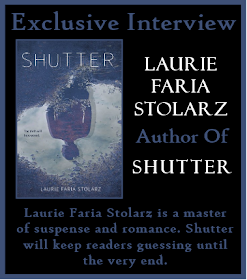 Laurie, what was your inspiration for writing SHUTTER?


I love to play with perspective, looking at the same subject from different angles. In the case of SHUTTER, I wanted to explore a potential crime from different angles, rather than just painting it over in one color. By getting into the variations of shading, we can see how easily the truth can get stretched, misconceived, dismissed, and/or twisted up. In the end, Day must discover that no story is ever complete in the absence of perspective. On her quest to get to the heart of truth, Day comes to realize just how brave that quest is, because sometimes when we look that deeply, we see truths we’d rather not know.

I’ve known for some time that when it comes to “truth,” perspective is really everything. But writing this book also reaffirmed for me how brave it can be look at the same story from different perspectives, particularly when that story hits close to home and the potential is there to see things that one may not want to. In Day’s case, she lives in the shadows of her parents’ super-heroic feats, as they fight for justice and humanity. It’s not until the end of the novel that she realizes that being brave enough to consider varied points of view is just as important, and be can be every bit as heroic.

What do you hope readers will take away from SHUTTER?

I hope readers are reminded that there’s always more than one version of a story.

I typically work at home, though sometimes I like to get away to a coffee shop where nobody knows me. I live in a small town and if I go into a coffee shop near me, there’s a good chance I’ll get interrupted, which can be fun because I love to chat, but it isn’t very productive in terms of my work. I also carry a notebook around with me everywhere. I love taking notes on my manuscript as I’m working on a project.

Aspiring writers should be open to learning and to getting better in their craft. If more than one person criticizes the same point in the work – i.e. a main character whines too much – chances are that person needs to look at that point again. Writers should never pay reading fees while trying to get published – ever. Writers need to do their homework. Know to whom they're sending a query letter, who that person’s clients are, what that person’s track record is (i.e. the details of his or her most recent acquisitions), and what that person is looking for. Every letter should be personalized and reflect that they've done their research. And, lastly, writers should consider joining a writers group. There’s nothing better than being in a group of like-minded writers who can help inspire and cheer you on, and who can provide constructive feedback that can help to strengthen your work.

THE FACTS
• Julian Roman, age sixteen, is an escapee from the Fairmount County Juvenile Detention Facility.
• His parents, Michael Roman and Jennifer Roman, are dead.
• Julian is wanted for murder.

THE QUESTIONS
• Why is Julian Roman on the run?
• Just how dangerous is he?
• And who did kill Michael and Jennifer Roman, if not Julian?

Seventeen-year-old Day Baker views life through the lens of her camera, where perspective is everything. But photographs never tell the whole story. After Day crosses paths with Julian, the world she pictures and the truths she believes--neatly captured in black and white--begin to blur.

Julian is not the "armed and dangerous" escapee the police are searching for, but his alibis don't quite add up, either. There is more to his story. This time, Day is determined to see the entire picture . . . whatever it reveals. Did he? Or didn't he?

Day digs deeper into the case while Julian remains on the run. But the longer her list of facts becomes, the longer the list of questions becomes, too. It's also getting harder to deny the chemistry she feels for him. Is it real? Or is she being manipulated?

Day is close to finding the crack in the case. She just needs time to focus before the shutter snaps shut.

Laurie Faria Stolarz is a master of suspense and romance. In this page-turning thriller, Stolarz tackles dark truths with a powerful, contemporary voice. Shutter will keep readers guessing until the very end.

Laurie Faria Stolarz grew up in Salem, MA, attended Merrimack College, and received an MFA in Creative Writing from Emerson College in Boston.

Laurie Faria Stolarz is an American author of young adult fiction novels, best known for her Blue is for Nightmares series. Her works, which feature teenage protagonists, blend elements found in mystery and romance novels.

Stolarz found sales success with her first novel, Blue is for Nightmares, and followed it up with three more titles in the series, White is for Magic, Silver is for Secrets, and Red is for Remembrance, as well as a companion graphic novel, Black is for Beginnings. Stolarz is also the author of the Touch series (Deadly Little Secret, Deadly Little Lies, Deadly Little Games, Deadly Little Voices, and Deadly Little Lessons), as well as Bleed and Project 17. With more than two million books sold worldwide, Stolarz's titles have been named on various awards list.

Have you had a chance to read SHUTTER yet? Are you open to learning and getting better at your craft? Do you do your homework before querying? Share your thoughts about the interview in the comments!