Katelyn Detweiler, author of TRANSCENDENT, on stepping outside your comfort zone

We're delighted to have Katelyn Detweiler stop by to tell us more about her latest novel TRANSCENDENT. 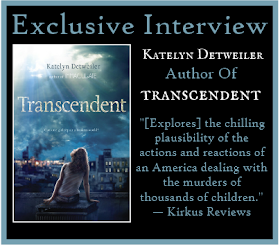 Katelyn, what scene was really hard for you to write and why, and is that the one of which you are most proud? Or is there another scene you particularly love?

The hardest scenes for me to write were the moments of Iris finding out a rather extraordinary story about her past. A story that changes everything about who she is now—what she thinks of herself and what others will inevitably think, too. The trickiest part was writing this in a way that was clear and compelling for new readers, but that also spoke to those who read my first book, IMMACULATE. While TRANSCENDENT is written as a standalone, IMMACULATE serves as a prequel—the full backstory—showing readers Iris’s mom as a teenager when this “extraordinary story” first begins. It was a juggling act to keep the details all on track, but I was proud of how it worked out in the end.

What do you hope readers will take away from TRANSCENDENT?

That the little things matter. I think we all can feel utterly helpless in the face of all the depressing stories in our newsfeed—what can we as individuals possibly do to help? That’s how Iris feels, too, when the tragedy in Disney World and the details of her own past collide, and she’s being pushed to do something, be someone better, bigger, braver than who she is. But sometimes it’s not about being extraordinary. It’s about simpler steps, stepping outside your comfort zone and talking to someone new. Listening to their stories.

I’ve had one book out before this—IMMACULATE—and that was also my first ever manuscript. My road to publication was a bit untraditional, since I’m a literary agent by day, and have been through the book process on the other side of things. My agent is also my boss—so asking her to read was one of the most terrifying moments of my life. ☺ But she was wonderful, a cheerleader since day one. I feel ridiculously lucky every single day, working with such smart book people. Lots of love for JGLM!

I just finished up a first draft of a third book—ah!—that I am very much excited about. It’s early days still so I’ll refrain from too many details, but it’s totally separate from both TRANSCENDENT and IMMACULATE and it was amazing to start fresh with a new slate of characters. When terrorists bomb Disney World, seventeen-year-old Iris Spero is as horrified as anyone else. Then a stranger shows up on her stoop in Brooklyn, revealing a secret about the mysterious circumstances surrounding Iris’s birth, and throwing her entire identity into question. Everything she thought she knew about her parents, and about herself, is a lie.

Suddenly, the press is confronting Iris with the wild notion that she might be “special.” More than just special: she could be the miracle the world now so desperately needs. Families all across the grieving nation are pinning their hopes on Iris like she is some kind of saint or savior. She’s no longer sure whom she can trust—except for Zane, a homeless boy who long ago abandoned any kind of hope. She knows she can’t possibly be the glorified person everyone wants her to be… but she also can’t go back to being safe and anonymous. When nobody knows her but they all want a piece of her, who is Iris Spero now? And how can she—one teenage girl—possibly heal a broken world?

Katelyn Detweiler was born and raised in Pennsylvania, living in a centuries-old farmhouse surrounded by fields and woods—a setting that fueled her childhood imagination and, many years later, inspired her YA debut, Immaculate. Katelyn is a writer by night (and weekend) and a literary agent by day, representing books for all ages and across all genres. She currently lives, works, and writes in Brooklyn.

Have you had a chance to read TRANSCENDENT yet? Have you written standalone novels that function as a prequel and sequel to each other? Have you been terrified to have someone specific read your novel? Share your thoughts about the interview in the comments!