Gretchen McNeil, author of I'M NOT YOUR MANIC PIXIE DREAM GIRL, on writing a book without a dead body

We're thrilled to have Gretchen McNeil stop by to tell us more about her latest novel I'M NOT YOUR MANIC PIXIE DREAM GIRL. 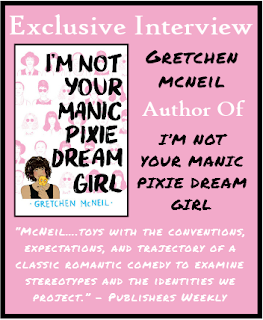 Gretchen, what was your inspiration for writing I'M NOT YOUR MANIC PIXIE DREAM GIRL?

My deep loathing for the manic pixie dream girl trope, which I feel is demeaning, restricting, and potentially dangerous for young girls who may internalize the male idealization of a female muse.

I had some trouble writing the scenes where my gay character Gabe tries on the persona of a flamboyant gay stereotype. Like with the manic pixie dream girl trope, this is a stereotype that can be really harmful not only to young gay men (who may think this is the only “way” to be an out homosexual) and to the LGBTQ community in general. Like idealizing women, homosexuality doesn’t fit into a box, and the community is made up of all shapes, sizes, personalities, etc. So writing this stereotype was difficult, even though I was using it to illustrate a point.

I’M NOT YOUR MANIC PIXIE DREAM GIRL is the first book I’ve written without a dead body. And let me tell you, I was terrified of writing it! I wasn’t entirely sure I knew how to plot a book without a serial killer, monster, or other homicidal maniac driving the action, so I’m actually incredibly proud of how this feminist comedy turned out!

What do you hope readers will take away from I'M NOT YOUR MANIC PIXIE DREAM GIRL?


There are two things. First, the idea that our world doesn’t only exist in terms of black and white morals - you're either a good guy or a bad guy, a protagonist or an antagonist, your choices are either right or wrong. In reality, the world is full of fuzziness and gray zones. Characters can make bad decisions for good reasons, and can vice versa, and sometimes, I little bit of empathy can go a long way.

Second, I want girls to know that they exist in this world independently from the way men idealize them. As I say in the book, "Women are not on this planet exclusively to inspire men and make them happy. We have our own dreams and needs, our own shit to get done." That's the message I want young readers to come away with!

From acclaimed author Gretchen McNeil comes her first realistic contemporary romance—perfect for fans of Kody Keplinger’s The Duff and Morgan Matson’s Since You've Been Gone.

Beatrice Maria Estrella Giovannini has life all figured out. She's starting senior year at the top of her class, she’s a shoo-in for a scholarship to M.I.T., and she’s got a new boyfriend she’s crazy about. The only problem: All through high school Bea and her best friends Spencer and Gabe have been the targets of horrific bullying.

So Bea uses her math skills to come up with The Formula, a 100% mathematically guaranteed path to social happiness in high school. Now Gabe is on his way to becoming Student Body President, and Spencer is finally getting his art noticed. But when her boyfriend Jesse dumps her for Toile, the quirky new girl at school, Bea realizes it's time to use The Formula for herself. She'll be reinvented as the eccentric and lovable Trixie—a quintessential manic pixie dream girl—in order to win Jesse back and beat new-girl Toile at her own game.

Unfortunately, being a manic pixie dream girl isn't all it's cracked up to be, and “Trixie” is causing unexpected consequences for her friends. As The Formula begins to break down, can Bea find a way to reclaim her true identity and fix everything she's messed up? Or will the casualties of her manic pixie experiment go far deeper than she could possibly imagine?

Gretchen McNeil is the author of the standalone YA horror novels POSSESS, TEN (2013 YALSA Top Ten Quick Pick for Reluctant Young Adult Readers, a Romantic Times Top Pick, a Booklist Top Ten Horror Fiction for Youth, a finalist for Washington state’s 2015 Evergreen Young Adult Book Award and Vermont’s 2014-2015 Green Mountain Book Award, and was nominated for “Best Young Adult Contemporary Novel of 2012? by Romantic Times) and 3:59, as well as GET EVEN and GET DIRTY, part of her mystery/suspense series Don't Get Mad, all with Balzer + Bray for HarperCollins. In 2016, Gretchen will publish two novels: RELIC, a YA horror novel, with HarperCollins/EpicReads Impulse on March 8, 2016, and in the fall, I’M NOT YOUR MANIC PIXIE DREAM GIRL, her first YA contemporary, with Balzer + Bray. Gretchen also contributed an essay to the Dear Teen Me anthology from Zest Books.

Gretchen is a former coloratura soprano, the voice of Mary on G4's Code Monkeys and she sings with the LA-based circus troupe Cirque Berzerk. She is repped by Ginger Clark of Curtis Brown, Ltd. You can find Gretchen on Twitter, Facebook, and on her blog.

Have you had a chance to read I'M NOT YOUR MANIC PIXIE DREAM GIRL yet? Do you set out to destroy tropes in your writing? Do you portray gray morals rather than black and white in your writing? Share your thoughts about the interview in the comments!