Gregg Hurwitz, author of THE RAINS, on being inspired by zombie ants

We're thrilled to have Gregg Hurwitz stop by to share more about his latest novel THE RAINS. 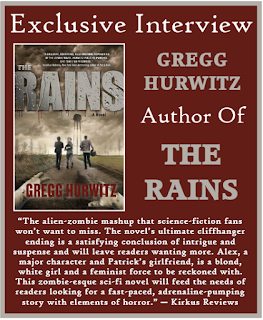 Gregg, what was your inspiration for writing THE RAINS?

Probably a video I saw back in my high school science class that showed this: https://www.youtube.com/watch?v=-_1FjXb8T1Y.

I mean, ug, right? So it got me thinking. What if something like this happened to humans? More specifically—to adults? And what if those infected adults were even worse than zombie ants? What if they had holes bored straight through their heads in place of their eyes? What if their job was to seek out and round up kids? But we don’t know why they’re rounding up kids, so our main characters have to figure it out.

And it all exploded from there.

I think The Rains would resonate with Fifth Wave-ers. And people who dig Jonathan Maberry’s Rot & Ruin series (another of my favorites). And there’s also a strong influence of other great kids-battling-on-their-own stories, from Lord of the Flies to Battle Royale to The Hunger Games.

What do you hope readers will take away from THE RAINS?


I grew up reading Jack London and Robert Louis Stevenson, whose books featured YA characters acting in ways that were brave and heroic—and yet always real. They inspired me to face the world differently. Even the smaller, real-life challenges that I encountered could be met with better (for lack of better word) character. And while I didn’t always feel like the bravest or toughest kid when I was growing up, I could at least fake it. Someone smarter than me said, “Act like the person you want to be.” Fiction did that for me and I hope The Rains plays a small part in helping readers do that for themselves, too.

In one terrifying night, the peaceful community of Creek's Cause turns into a war zone. No one under the age of eighteen is safe. Chance Rain and his older brother, Patrick, have already fended off multiple attacks from infected adults by the time they arrive at the school where other young survivors are hiding.

Most of the kids they know have been dragged away by once-trusted adults who are now ferocious, inhuman beings. The parasite that transformed them takes hold after people turn eighteen--and Patrick's birthday is only a few days away.

Determined to save Patrick's life and the lives of the remaining kids, the brothers embark on a mission to uncover the truth about the parasites--and what they find is horrifying. Battling an enemy not of this earth, Chance and Patrick become humanity's only hope for salvation.

Gregg Hurwitz is the New York Times bestselling author of 15 thrillers, including the recently released ORPHAN X. His novels have been shortlisted for numerous literary awards, graced top ten lists, and have been translated into 27 languages.

He is also a New York Times Bestselling comic book writer, having penned stories for Marvel (Wolverine, Punisher) and DC (Batman, Penguin). Additionally, he’s written screenplays for or sold spec scripts to many of the major studios, and written, developed, and produced television for various networks. Gregg resides in Los Angeles.

Have you had a chance to read THE RAINS yet? Are you totally freaked out by that zombie ant video? Did fiction help you act like the person you wanted to be? Share your thoughts about the interview in the comments!