Daniel Kraus, author of EMPIRE DECAYED, on research being wrapped up in a story's guts

EMPIRE DECAYED is volume 2 of The Death and Life of Zebulon Finch, and we're excited to have Daniel Kraus here to chat about it. 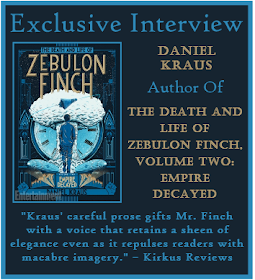 Daniel, what was your inspiration for writing EMPIRE DECAYED?

Obviously, it's the second half of the story began in AT THE EDGE OF EMPIRE. In a way, the first book was the "rise" of Zebulon Finch (and America) and the second book is the "fall" of both. What excited me most was to take the self-centered, vain Zebulon so far into darkness that he finally has to come to terms with what he is as a walking dead man. This meant taking on some of the biggest things you can take on as an author -- God, the meaning of life, the purpose of death, the extent of evil, the limits of true good.

The book covers 1942 to the present. In the WW2 section, I deal with Nazism and the Holocaust, and you don't go into that lightly. I did as much research, and watched as much horrible documentary footage, as I could. It seemed like the right thing to do. I didn't want to soft-peddle anything. So that was hard, though it's all relative. The section I'm proudest of is the one that takes place during the 1950s in suburban Kansas. I think that required a delicate touch -- balancing the squeaky-clean exterior of the nuclear family with the national wounds still oozing from WW2 and Korea.

Tough one. The Zebulon Finch projects covers an entire century and, in doing so, devours just about every genre that exists like some sort of monstrous, out-of-control omnivore. I would say if readers really want to be taken on a long, surprising, often shocking journey they probably won't forget, they should give it a try.

How long did you work on EMPIRE DECAYED?

A couple years or so? It all blurs together between volumes.

It reinforced what I already knew about research. Research isn't some garland you string along your story to make if "feel" like a certain time period. Research is the wrapped up in the story's guts. It's not garland; it's intestines. Once you start researching, you have to let that research start to guide the story, or it's not going to feel part of it.

What do you hope readers will take away from EMPIRE DECAYED?

I hope they think about why they're here, on Earth, and what decisions they can make that will make a life mean something. That's a pretty big statement, but it's a big book.

I haven't had a book not get published. However, I did write one book that I have chosen not to publish. It's too frightening. I don't think anyone could take it. I can't even take it.

No. But there are methods that have sank in -- how I research, how I revise, how I outline. That process has been honed to machete sharpness.

What's your writing ritual like? Do you listen to music? Work at home or at a coffee shop or the library, etc?
At home. Always with music. Always start the very first thing in the morning and then go until the sentences start failing.

If you're serious about writing, start writing longer works. Try to write a novel, and try to finish it, even if it's not great. In general, the market wants novels, not short stories.

I'm working on a YA novel called BENT HEAVENS about two teenagers who capture an alien and decide to do something terrible to it. I'm also working on an adult novel I can't talk about quite yet. But it's pretty exciting.

A murdered teen is resurrected to walk the earth for more than a century in the second and final book in the sweeping epic that Entertainment Weekly called “utterly riveting.”

Zebulon Finch has faced more violence, lust, and heartbreak than any other seventeen-year-old in history. But nothing can prepare him for what is coming next.

Half a century has passed since Zebulon Finch was gunned down and then inexplicably resurrected to experience a second life. Picking up his tale where he left off, Zebulon heads to Nazi Germany on a top-secret mission. From there he escapes to the shiny new world of the suburbs—a tidy neighborhood hiding dark secrets. He will exchange the pains of this world for what he believes will be peace among the stars. He will march for social change all the way to Woodstock, go raving mad in the desert, and finally exit from humanity the only way he knows how. We first met Zebulon sealed in a tomb beneath the World Trade Center—might he yet crawl from the rubble to discover a different America?

Enthralling and gut-wrenching, The Death and Life of Zebulon Finch, Volume Two: Empire Decayed is the conclusion to the epic saga of one young man’s journey down the long road to redemption.

DANIEL KRAUS has landed on Entertainment Weekly's Top 10 Books of 2015 (The Death and Life of Zebulon Finch), won two Odyssey Awards (for both Rotters and Scowler), and has been a Library Guild selection, YALSA Best Fiction for Young Adults, Parent’s Choice Gold Award winner, Bram Stoker finalist, and more.

He co-authored Trollhunters with filmmaker Guillermo del Toro, and his work has been translated into over 15 languages. His feature films include Musician (2007 New York Times Critics’ Pick) and Sheriff (2006 season premiere of PBS’s Independent Lens).

Have you had a chance to read EMPIRE DECAYED yet? Is your research the story's intestines rather than garland? Have you honed your craft to machete sharpness? Share your thoughts about the interview in the comments!