Cylin Busby, author of THE STRANGER GAME, on avoiding distractions while writing

We're delighted to have Cylin Busby join us to share more about her latest novel THE STRANGER GAME. 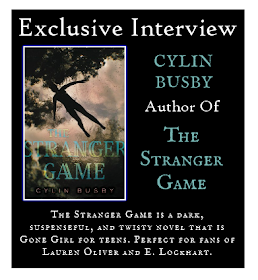 Cylin, what was your inspiration for writing THE STRANGER GAME?

I was inspired by the mysterious true crime case of Nicholas Barclay, a Texas boy who disappeared in 1995 and then returned to his family a few years later, greatly changed. Though my book is fiction, I studied the case of Nic Barclay and how he came back to his family after his disappearance and used those real events to inform the story of Nico and her sister, Sarah.

This novel, THE STRANGER GAME, has been compared to WE WERE LIARS and THE GIRL ON THE TRAIN—and I can see why. It’s a thriller that focuses on female relationships, and features an unreliable narrator. Some readers have complained that my book kept them up late, so if you’re not a reader who likes mystery, thrillers, or books with a lot of plot twists, this is not for you! One reader said she had to skip to the end to find out what happens because she couldn’t stand not knowing, and that ruined the read for her—my advice: No spoilers!

What do you hope readers will take away from THE STRANGER GAME?

The theme of this novel is family—what makes a family, and what is the true meaning of love in a family. Do we have to love the people who are related to us? I would like readers, especially young readers, to come away from this novel understanding that sibling relationships are complicated and change over time—even if you feel like you “hate” your brother or sister now, that relationship will be transformed as you grow up. (I know your parents are probably already telling you this, but it’s TRUE!)

I usually work at home, at a desk with a big computer screen because my eyesight is pretty terrible! I cannot have any music, noise, or distractions while I’m working. I usually turn my phone off as well, because if I hear that little “ping” that says I have an email, I’ll read it, and then my mind goes off in another direction. If it’s quiet and I’m not being distracted, I can write for hours and hours!

What are you working on now?
I’m currently writing a screenplay that’s a horror/comedy and another YA novel called WREN, historical fiction this time!

The Stranger Game is a dark, suspenseful, and twisty young adult novel—perfect for fans of Lauren Oliver and E. Lockhart—about fifteen-year-old Nico Walker, whose sister returns home after a four-year disappearance.

When Nico Walker's older sister mysteriously disappears, her parents, family, and friends are devastated. But Nico can never admit what she herself feels: relief at finally being free of Sarah's daily cruelties.

Then the best and worst thing happens: four years later, after dozens of false leads, Sarah is found.

But this girl is much changed from the one Nico knew. She's thin and drawn, where Sarah had been golden and athletic; timid and unsure, instead of brash and competitive; and strangest of all, sweet and kind, when she had once been mean and abusive. Sarah's retrograde amnesia has caused her to forget almost everything about her life, from small things like the plots of her favorite books and her tennis game to the more critical—where she's been the last four years and what happened at the park on the fateful day she vanished. Despite the happy ending, the dark details of that day continue to haunt Nico, and it becomes clear that more than one person knows the true story of what happened to Sarah. . . .

Cylin Busby is the author of several teen books and numerous articles as well as the acclaimed young adult memoir, THE YEAR WE DISAPPEARED, which was a Wall Street Journal bestseller, a Publishers Weekly Best Book of the Year, and a Cybils Award winner.

Her latest novel, THE NINE LIVES OF JACOB TIBBS, has earned starred reviews and was an Amazon Best Book of the Month. The former Senior Editor of Teen Magazine, Cylin now lives in Los Angeles with her family.

Have you had a chance to read THE STRANGER GAME yet? Have you been inspired by a true crime story? Do you turn off your phone when you write? Share your thoughts about the interview in the comments!