C.C. Hunter, author of MIDNIGHT HOUR, on climbing into your characters’ skin

We're pleased to have C.C. Hunter stop by to tell us more about MIDNIGHT HOUR, the final novel in the A Shadow Falls series. 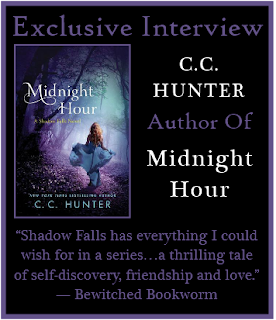 C.C., what scene was really hard for you to write and why, and is that the one of which you are most proud? Or is there another scene you particularly love?

The hardest was the graduation scene right at the end—the very end of the entire Shadow Falls journey. Yes, Kylie, Della and Miranda all graduate. As in real life, this brings about some big changes. I wanted to get it perfect. I wanted it to be nostalgic of all they have been through, to evoke emotions and remind the readers of the whole Shadow Falls journey. I cried so hard when I finished writing that scene. I hope that means I got it right.

I think the scene I particularly loved was when Miranda was trying to convince Della and Kylie to teach her to be a badass and to fight. Poor Miranda she has such a soft heart, but soft heart aside, this dyslexic witch found her mojo and kicked butt.


What do you hope readers will take away from MIDNIGHT HOUR?

Okay, I write to entertain, to create a story that will yank readers away from their own problems and offer pure escape. That said, because my characters are always struggling to learn or find something in their lives, this elusive thing turns out to be an underlined message. In Midnight Hour, Miranda is desperately trying to overcome her lack of confidence. So the take away value in this is book is, how important it is to believe in oneself. And how our confidence or lack of confidence affects not only how we see at ourselves, but how the world sees us.

Sometimes I think the problem is we need new keys for every book. Yes, there’s knowledge we need to have. We need to know how to write, how to add conflict and how keep the pace moving. But sometimes just knowing that doesn’t feel like enough. It’s like my brain will shut down and I don’t know where to start. Where is my dad-blasted key! Midnight Hour will be my thirty-fifth book and with almost every book I start writing, I panic when I write chapter one. I have to take some calm breaths and tell myself I know how to do this. I know how to write. What I need to do is climb into my characters’ skin. When I feel what they feel, their fears, their goals, their pain then the story will take off. Sometimes I have to start writing it, not feeling it, and then five, ten, twenty pages later, I’m in. I find the key to that story. Then I’ll go back and rework those first pages. For me the key to writing a novel is the characters, knowing them so well that the story starts flowing.

Well, I am working on a new Young Adult that will release in 2017. It’s different from Shadow Falls in that it’s not a straight paranormal. It’s contemporary, but it has a woo-woo vibe to it that I think Shadow Falls fans will love. It will still have some of my humor, but it has tons of heart and romance. It even has a bit of suspense that my readers expect from me. I’ll certainly be talking more about it when the time gets closer.

Being a dyslexic witch is a curse in itself, but Miranda Kane’s time at Shadow Falls has helped her harness her magical powers. Now, just as she’s finally mastered them and is preparing to graduate with her friends, a near-death experience threatens to ruin it all.

Miranda awakens in the hospital with a mysterious tattoo that no one can explain. As she struggles to make sense of it – and questions her feelings for a certain irresistible shape-shifter and a hot new guy – the strange markings begin to spread all over her body, leaving her desperate to find answers. But before she can solve that problem, a new one arises: her sister is missing.

Has her sister been kidnapped? Miranda will risk her life to find out. Will she live to share the day she’s worked so hard for with her friends? When the clock strikes midnight, will Miranda make it to her graduation at Shadow Falls?

C.C. would love to hear from you. Because of deadlines, it may take her a day or so to get back with you, but she will reply. cc@cchunterbooks.com

Have you had a chance to read MIDNIGHT HOUR yet? Do you make yourself cry while writing scenes? Do you feel panic when you start writing chapter one? Share your thoughts about the interview in the comments!