Brie Spangler, author of BEAST, on it's okay if it takes a long time to get to your own personal 'there'

We're delighted to have Brie Spangler with us to share more about her debut BEAST. 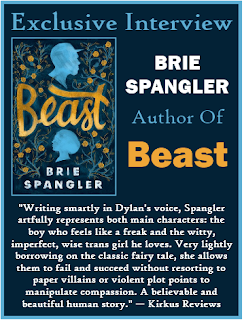 Brie, what was your inspiration for writing BEAST?

Believe it or not, the New England Patriots. I grew up about twenty minutes away from Foxboro Stadium (now Gilette Stadium) and I remember going to my hometown all you can eat Chinese buffet with my mom for lunch one day and these absolutely huge, enormous men —just mountains of men!— came in, grabbed everything in the buffet, opened their mouths and poured it in, chewed a little bit, dabbed their mouths and went back to football practice. I was maybe eleven or so? Maybe twelve? And all I could think was, “What can that possibly be like, being that big?” It was seriously mind-blowing to think that people could grow that big, especially as I was still growing myself. So their size and the way they had no choice but to move through the world like titans (*ahem* not the Tennessee Titans, to clarify) and it never left me. So I put all that into the body of a fifteen year old boy who wants nothing to do with it.

There’s a few scenes that were delightful to write, but I don’t know if I can share them without being too spoilery. I will say anything with the two of them talking and hanging out was amazingly fun to write. I enjoyed the scene where they met for the first time and watching Jamie poke holes in Dylan’s balloon, so to speak, because he’s wallowing in self-pity and she’s just like, uh-huh, that’s cute. What else you got?

What do you hope readers will take away from BEAST?

To piggyback on the previous question- anything involving cruelty and transphobia was very hard to write. The ugliness and how it exists in daily life throughout our country and the world needs to stop, people are getting killed. So I hope if someone identifies with Dylan in any way, they might see there’s no excuse for transphobia. To stop it before it happens, to speak up. We are all people, we all have hopes and dreams. So if there’s anything I hope people take away from this book it’s that we need to do better so that everyone can live with love, safety, and peace. Also: trans actors and actresses for trans roles, please!

I had more than a few setbacks, that’s for sure. I’m sure I’ve got at least four or five trunk novels that will never see the light of day and that’s okay! I would never say any of them were wastes of time, I learned so much from all of them. There were major disappointments along the way, but I’m very fortunate, I have very supportive friends and family and amazing critique partners. They helped me believe when I thought I was at the end and they were all there to celebrate the milestones- getting an agent (hello Mackenzie, ilu!), being out on sub, finding a publisher (hello Knopf, ilu!) and then holding the actual hardcover book in my hands. It’s been amazing and I’m so thankful.

I wish there was an AHA moment, but unfortunately I never got one that was terribly specific. A lot of trial and error led to writing a whole book. Many stops and starts. For example, I took a creative writing class in college to kill an English credit (I went to art school, hence the bad grammar. My apologies.) and our professor focused an entire unit on voice and when we came to the end, she singled out something I wrote and told everyone to listen to the VOICE. I found that to be very embarrassing and didn’t write again for a couple years after that. So when I say I became a writer slowly, I mean like turtles evolving from naked lizards, slow. Related: It’s 100% OKAY if it takes you a long, long, long time to get to your own personal ‘there’.

I try to write often but sometimes that’s hard and I just have to get it in when I can. When I have legit things (like scenes I’ve been dying to get out for months) to write, it comes out like pure fire and I can’t quit. We all wish for days like that! Those are the best. I also find it helpful to not write anything and play Solitaire because that helps me work through plot bunnies. As for music, omigod yes, it’s a whole thing. I get these playlists together and listen to one particular song on a loop while writing a group of chapters or a scene. Helps get that feeling of the book instantly and when you hear it, it sounds like writing. I can hear a song from a book I tried to write ten years ago and —boom!— I’m there. Butt in seat and writing that character in that scene from that book. As long as I have my soundtrack and a keyboard, I’m good to go and I write at home, coffee shops, and the library. I even wrote at a Toyota dealership while my car was getting fixed!

Don’t stop! Seriously, keep it going, keep writing. I wanted to quit so many times, it became a running joke. Write your stories. Love your characters and we will too.

Hopefully book number two! All TBD for now, but contemporary and female POV. I super love it, having so much fun. Hope to share more soon! Watch this space. A witty, wise, and heart-wrenching novel that will appeal to fans of Rainbow Rowell and David Levithan.

Tall, meaty, muscle-bound, and hairier than most throw rugs, Dylan doesn’t look like your average fifteen-year-old, so, naturally, high school has not been kind to him. To make matters worse, on the day his school bans hats (his preferred camouflage), Dylan goes up on his roof only to fall and wake up in the hospital with a broken leg—and a mandate to attend group therapy for self-harmers.

Dylan vows to say nothing and zones out at therapy—until he meets Jamie. She’s funny, smart, and so stunning, even his womanizing best friend, JP, would be jealous. She’s also the first person to ever call Dylan out on his self-pitying and superficiality. As Jamie’s humanity and wisdom begin to rub off on Dylan, they become more than just friends. But there is something Dylan doesn’t know about Jamie, something she shared with the group the day he wasn’t listening. Something that shouldn’t change a thing. She is who she’s always been—an amazing photographer and devoted friend, who also happens to be transgender. But will Dylan see it that way?

Author/illustrator of children's picture books and YA novels, Brie Spangler loves to draw and write stories and drink massive amounts of caffeine, but not quite Dave Grohl "Fresh Pot!"/require hospitalization levels. Writing down the ideas in her head was scary as a kid, so she turned to making pictures instead. Brie worked as an illustrator for several years before she began to write and immediately became a frothing addict. BEAST is her debut novel. Hit her up on twitter! @BrieSpangler

Have you had a chance to read BEAST yet? Have you ever been inspired by voracious football players? Can you work anywhere as long as you have your soundtrack and keyboard? Share your thoughts about the interview in the comments!