Zan Romanoff, author of A SONG TO TAKE THE WORLD APART, on all writing being in some way autobiographical

We're thrilled to have Zan Romanoff stop by to tell us more about her debut novel A SONG TO TAKE THE WORLD APART. 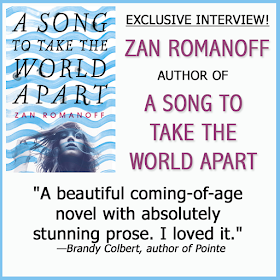 Zan, what book or books would most resonate with readers who love your book--or visa versa?

I grew up reading Francesca Lia Block and am always deeply flattered when people compare our work. More recently, Sarah McCarry and Bennett Madison have both written weird funny beautiful magical realist-y books about adolescence that I totally love. Also Adrienne Celt's The Daughters is sort of bizarrely similar to mine thematically, and so fantastic; I like to think of it as SONG's grown-up older cousin, maybe.

It taught me that all writing is in some way autobiographical-- even and maybe especially when you don't mean it to be! There are some parts of the book where you can draw a direct line from my life to the page and some where you'd have to be me to understand the connection, but there's always some real emotion or experience underlying the fiction. (I think that's what makes it good.)

What do you hope readers will take away from A SONG TO TAKE THE WORLD APART?

The idea that being selfish and screwing up is not just acceptable but inevitable-- that making mistakes, disappointing people and being disappointed by them doesn't ruin you as a person. It actually helps you become an adult. Whatever that is.

I got very lucky-- SONG was the first novel I ever finished. I wrote the first draft in about four months and then edited it for six. My agent, Logan Garrison at the Gernert Company, actually rejected it on first read; she said she'd take another look if I put the draft in the first person. At that point a bunch of agents had pointed out that it had a voice problem, so I wrote back to say I was doing a revision along those lines, but it wasn't in the first person, and did she want to see that? Luckily she did!

It also get rejected by every editor we sent it to on the first round of submissions-- except one, who had some issues with the plot, and wanted me to revise and re-submit it. When we spoke on the phone about what she was looking for it felt totally in line with some changes I was thinking about making anyway, so I did a very fast revision while I was off work for Christmas and New Years, and again, the second read worked out much better than the first had, and Katherine Harrison at Knopf bought the book.

It's weird to look back on now-- I actually had a relatively fast and straightforward journey, with about two years between when I first started writing it and when Knopf bought it. But at the time, when I didn't know how it was going to end, it felt completely endless and torturous and soul-destroying and I cried, like, a lot.

The revisions I did for Logan and Katherine, actually, truly-- first finding the book's voice, and then straightening out its plot. In both cases I felt like they had seen what I had tried and failed to do on my own, and pointed out the exact right thing that allowed me to bring it out so that it was clear to everyone else.

If I'm at home I write in silence at the kitchen table (I'm a great roommate, I promise), but I like going to coffee shops and don't mind their music. I don't know if it's cause or effect of the coffee shop thing, but I recently realized that I almost always write with a snack and a drink nearby-- I think because then writing feels like a nice treat I'm giving myself instead of something I have to do.

Edits on my second book, GRACE AND THE FEVER, which is about boy band fandom and conspiracy theories, and comes out in May of 2017! What if you could make someone love you back, just by singing to them? Fans of Jandy Nelson’s I’ll Give You the Sun and Leslye Walton’s The Strange and Beautiful Sorrows of Ava Lavender will be captivated by this contemporary love story with hints of magical realism.

Hanging out with Chris was supposed to make Lorelei’s life normal. He’s cooler, he’s older, and he’s in a band, which means he can teach her about the music that was forbidden in her house growing up. Her grandmother told her when she was little that she was never allowed to sing, but listening to someone else do it is probably harmless— right?

The more she listens, though, the more keenly she can feel her own voice locked up in her throat, and how she longs to use it. And as she starts exploring the power her grandmother never wanted her to discover, influencing Chris and everyone around her, the foundations of Lorelei’s life start to crumble. There’s a reason the women in her family never want to talk about what their voices can do.

And a reason Lorelei can’t seem to stop herself from singing anyway.

Hello! I write essays + fiction, mostly focused on food, feminism, television and books. I graduated from Yale in 2009 with a B.A. in Literature, and now live and work in Los Angeles.

My young adult fiction is represented by Logan Garrison at The Gernert Company.

Have you had a chance to read A SONG TO TAKE THE WORLD APART yet? Do you find parts of your writing autobiographical even when you don't mean them to be? Does it take you a while to find your book's voice? Share your thoughts about the interview in the comments!