GHOSTLY ECHOES is book 3 in the Jackaby series, and we're pleased to have William Ritter swing by to chat about it. 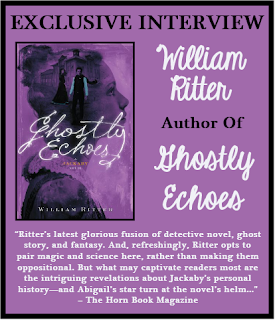 William, what is your favorite thing about GHOSTLY ECHOES: A JACKABY NOVEL?

This one was a chance to make the cast more dynamic—both by going into greater detail about the existing characters to bring out their past and personality, and also by bringing in a few more diverse characters.

What was your inspiration for writing GHOSTLY ECHOES: A JACKABY NOVEL?

I’m a high school teacher. I often think about my students and the kinds of messages messages they need to hear most at their stage of life. Many of the themes in the Jackaby books come from life lessons I tell my students on a near daily basis.

As I mentioned, I included more diverse characters in this book. I value young adult readers getting a chance to see a more inclusive world, especially readers who never see themselves in books, and I want to be a part of that. On the other hand, I never want to patronize or appropriate voices that are not my own, so I am cautious about how that representation comes across. The nuance there was important to me. My main characters have certain barriers, but also a great deal of social privilege, so they became models of how someone in a position of privilege can still greet diversity with respect and kindness and an open mind.

I love the Discworld books by Sir Terry Pratchett. He plays with fantasy tropes in very playful, witty ways, but along the way has an enormous amount of heart. The Enchanted Forest series by Patricia C. Wrede was influential to me as a young reader for the same reasons. For people who love a slightly darker but equally playful approach to the archetypes in mythology and folklore, Neil Gaiman’s works constantly impress me.

How long did you work on GHOSTLY ECHOES: A JACKABY NOVEL?

Ghostly Echoes was about a year of writing for me, plus work by my editor and the whole Algonquin Young Readers team. My other books have taken much longer and slightly shorter times, so every new book is its own adventure to write. I’m relearning how to do it every time.

Take risks. Follow ideas down dark alleys. Not all of the things you come up with will wind up in the final draft, but there’s a lot you’re missing if you don’t chase the idea in your head, just to see where it leads.

What do you hope readers will take away from GHOSTLY ECHOES: A JACKABY NOVEL?

The first few books focused on BE YOURSELF and BE ALL OF YOURSELF, which are incredibly important messages. This one goes a step further. Once you’re comfortable in your skin, its important to SUPPORT OTHERS IN BEING THEMSELVES. Everyone benefits from having someone believe in them or just accept them.

I was the exception to the rule. Jackaby should have been a lot harder. It was the first novel for which I ever really pursued publication, and it slipped through the minefield of the industry naively unscathed. I have my wife to thank for not letting me just tuck it into a desk and forget about it. I had written stacks of short fiction just for myself, and I had studied creative writing heavily at university, so it’s not as though I stumbled out of bed one day and tried writing for the first time. That said, I was still insanely fortunate to get a great agent to support me right out of the gates and a stupendous editor to believe in my story enough to bring it the rest of the way.

Was there an AHA! moment along your road to publication where something suddenly sank in and you felt you had the key to writing a novel? What was it?
My wife. She is a brilliantly talented artist and storyteller in her own right. There wasn’t a single moment so much as months of her continuing to be excited about the project and insisting that I go on and write more. If you want to be successful in your art, find someone better than you who believes in you, and spend your life trying to impress them. It’s worked pretty well for me so far.

I write when and where I can. I am a teacher and a father, which requires a lot of creative scheduling to make writing possible in the cracks—but I decided that it was something that I needed to pursue, so I make time for it. I often go to the library or just listen to instrumental music on headphones to help drown out the kids playing with action figures in the next room. Again, my wife makes it possible by being awesome.

It’s easy to hate a draft that’s not working yet, or feel awful that you’re not good enough. My drafts are ALWAYS AWFUL. Be okay with that. Have fun with it anyway. Love your writing. Laugh at your own jokes and let the handful of beautiful lines make you smile. You’re going to spend a lot of time with your manuscript, so try not to let the relationship get abusive. You don’t edit because it’s bad, you edit because it can be great.

The fourth and final book of the Jackaby series. Woo! Jenny Cavanaugh, the ghostly landlord of 826 Augur Lane, has enlisted the services of her detective-agency tenants to solve a decade-old murder--her own. Abigail Rook and her eccentric employer, R. F. Jackaby, dive into the cold case, starting with a search for Jenny’s fiancé, who went missing the night she died. But when a new, gruesome murder closely mirrors the events of ten years prior, Abigail and Jackaby realize that Jenny’s case isn’t so cold after all, and her killer may be far more dangerous than they suspected.

Fantasy and folklore mix with mad science as Abigail’s race to unravel the mystery leads her across the cold cobblestones of nineteenth-century New England, down to the mythical underworld, and deep into her colleagues’ grim histories to battle the most deadly foe she has ever faced.

Reports of William Ritter’s birthplace are unreliable and varied, placing his hometown either in a series of mysterious Catacombs in Malta or in a nondescript town in Oregon. His parents, it can be confirmed, raised him to value intelligence, creativity, and individuality. When reading aloud, they always did the voices.

At the University of Oregon, William made questionable choices, including willfully selecting classes for the interesting stories they promised, rather than for any practical application. When he wasn’t frivolously playing with words, he earned credits in such meaningful courses as Trampoline, Juggling, and 17th Century Italian Longsword. These dubious decisions notwithstanding, he regrets nothing and now holds degrees in English and Education with certificates in Creative Writing and Folklore.

He currently teaches high school Language Arts, including reading and writing, mythology and heroes. He is a proud husband and father. When reading aloud, he always does the voices.

Jackaby is his first novel. It was born in the middle of the night and written on two different hemispheres. It has survived typhoons and hurricanes, and was fostered into publication through the patient care of many hands.

Have you had a chance to read GHOSTLY ECHOES: A JACKABY NOVEL yet? Do you chase the ideas in your head? Do you have fun with your drafts even if they're awful? Share your thoughts about the interview in the comments!