Traci Chee, author of THE READER, on rolling up your sleeves and slogging through it

We're delighted to have Traci Chee with us to chat about her debut novel THE READER. 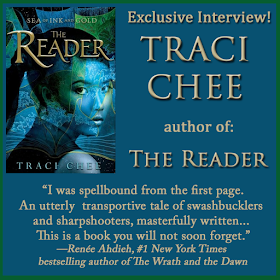 Traci, how long did you work on THE READER?

I first got the idea for The Reader in 2008 when my friend Tucker asked me to write a fantasy story. It actually began as a series of Facebook messages where I invented this massively complex interconnected story about a girl with a book about a boy with a book about a girl with a book (and so on ad infinitum). That story never went anywhere, but the girl and her book were so compelling they never really let me go, and I later got about 100 pages written in the summer of 2010. When I decided to try and make a real go of this “being an author” thing in 2013, I knew the story I wanted to tell was about this girl and her book. After that, it took me about 12 months of long, arduous days before I completed my first draft, and around 18 months before I signed with my agent and we got a book deal with Penguin.

Then, of course, there were the first round revisions with my editor, and second round revisions, and line edits, and copy edits, and proofs, and in the end I don’t think I got in my final edits until January 2016. About eight years from that initial idea.

Gosh, I wish I’d had one of those epiphanies where you’re just like, Yes! This is the key to everything! Unfortunately, the only thing that helped me through the writing of The Reader was rolling up my sleeves and slogging through it. I’ve said more than once that the only thing I feel really, naturally good at when it comes to writing is, “Huh. That’s a cool idea.” Everything else is work. Description, detail, character, world building, plot, tension, figurative language, I mean literally everything else is the product of taking classes, making mistakes, studying books I love, critiquing and getting critiqued (sometimes really brutally) by other writers, writing garbage beginnings and equally garbage endings, and revising and revising and revising. I guess if there is a secret, it’s work. Just work. And trying always to get better.

I don’t know if this was the hardest scene for me to write, but I remember very clearly it taking a long, long time to get the details just right. It’s in Chapter 4, just after Sefia, my main character, has witnessed the violent kidnapping of her only remaining relative, her aunt Nin. And as Sefia is lying there, feeling this really sharp sense of loss, she keeps thinking she sees Nin out of the corner of her eye--in a familiar shape, a flicker of movement. But when she looks, of course it isn’t Nin. Because Nin is gone. And Sefia compares this feeling of loss to someone being “cut out of the world like a paper doll.” And I think loss, grief, can be a lot like that. You can actually see where someone was supposed to have been, feel the edges of their absence, invisible, but painful to the touch.

I don’t think I could talk books about the power of books without mentioning Fahrenheit 451 by Ray Bradbury. It’s set in a world where books are outlawed and firefighters are tasked with reducing all contraband reading materials to ash.

If you’re in the mood for more stories about stories, Where Futures End by Parker Peevyhouse is a fascinating YA sci-fi collection of five interconnected novellas that each explore a different kind of storytelling, from fairy tales to MMORPGs.

Finally, I have to point everyone toward The Book Thief by Markus Zusak, which I absolutely adore. It’s got beautiful prose, tricksy narrators, nonlinear elements, intersecting storylines, and a fierce love of books that reminds me every time I read it how much I adore the written word. Sefia knows what it means to survive. After her father is brutally murdered, she flees into the wilderness with her aunt Nin, who teaches her to hunt, track, and steal. But when Nin is kidnapped, leaving Sefia completely alone, none of her survival skills can help her discover where Nin’s been taken, or if she’s even alive. The only clue to both her aunt’s disappearance and her father’s murder is the odd rectangular object her father left behind, an object she comes to realize is a book—a marvelous item unheard of in her otherwise illiterate society. With the help of this book, and the aid of a mysterious stranger with dark secrets of his own, Sefia sets out to rescue her aunt and find out what really happened the day her father was killed—and punish the people responsible.

Traci Chee is an author of speculative fiction for teens. An all-around word geek, she loves book arts and art books, poetry and paper crafts, though she also dabbles at piano playing, egg painting, and hosting potluck game nights for family and friends. She studied literature and creative writing at UC Santa Cruz and earned a master of arts degree from San Francisco State University. Traci grew up in a small town with more cows than people, and now feels most at home in the mountains, scaling switchbacks and happening upon hidden highland lakes. She lives in California with her fast-fast dog. The Reader is her YA debut.

Have you had a chance to read THE READER yet? Have you had a story start as a conversation with a friend? Do you take classes and read books to improve your craft? Share your thoughts about the interview in the comments!