The Forbidden Doors throughout Harry Potter

For today's Craft of Writing post, I thought we'd try something a bit different. I've started a video series on YouTube geared to writers with tips from my newly updated A Writer's Guide to Harry Potter. Here is one of my new videos along with the written post below. If you're a published author and would like to do a video format for a Craft of Writing post, drop me a note to Susan at AYAPLit AT gmail DOT com.

As writers, whether consciously or unconsciously, we employ the use of archetypes to transport our characters better into the reader's mind. We use character archetypes (the nurturer, the librarian, the femme fatale, the bad boy) to better shape our character's personalities, and storyline archetypes (the hero, the trickster, the shadow, the mentor, the threshold guardian) to define that character's role in the story. Of these storyline archetypes, I find the threshold guardian particularly interesting.

Threshold Guardians are placed at portals to new worlds or gateways to new challenges to keep the unworthy out. A guardian may be a good-hearted ally of the hero, looking out for his best interest, or he may be an accomplice of the villain, seeking to harm or hinder the hero from completing his quest. Either way, as part of his quest, the hero will be tested by his ability to overcome or win over the many Threshold Guardians he will encounter along the way.

J.K. Rowling challenges Harry with numerous Thresholds and Guardians throughout her Potter series. From the Leaky Cauldron entry to Diagon Alley, to Dobby sealing the entry to Platform 9¾ in Chamber of Secrets, to the hidden door of Grimmauld Place, Harry is tested by each door he must pass through. However, I’d like to focus on one type of Gateway and Guardian to look at closer.


In his book The Writer's Journey, author Christopher Vogler talks about the Law of the Secret Door (p. 112-113) (also related to Carl Jung's "Forbidden Door"). Many myths include a set-up where the heroine is told she must never eat from a certain tree, never open a certain box, or never pass through a certain door, upon pain of death. Of course the myths I’m referring to are Eve in the Garden of Eden, Pandora with her box, and Belle in Beauty and the Beast. We all know what happens, what is sure to happen anytime this sort of situation presents itself. If you have children, you probably have this happen several times a day.

The power of curiosity is universal. In the words of the immortal Dumbledore, "Curiosity is not a sin.... But we should exercise caution with our curiosity... yes, indeed" (p. 598, Goblet of Fire). Whereas later in the series Harry more strongly develops his own driving need to set the world right by stopping Voldemort, in the first three books, curiosity is one of the prime motivators driving on Harry, Ron, and Hermione.

It seems to me there is a Forbidden Door in each Potter book, and a guardian to go with it. This forbidden door leads directly to the Inmost Cave where the Ordeal occurs:

Beyond these first three books, the Secret Door and its Guardian gets a bit murkier, more psychological, but they’re still there. 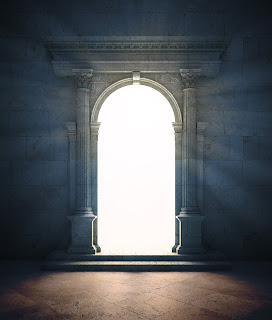 Forbidden Doors are special thresholds and great tools for writers. They set up reader expectation for something powerful and dangerous to occur once that gateway is breached. They pull your readers in, engaging their own curiosity as they urge your heroine on through the secret door, then hold their breath as to what fate will befall her for her trespass. Make sure you have a powerful, interesting Guardian for such a special door.

Can you name some other Threshold Guardians or Forbidden Doors from a book you've read recently? Have you worked with the Law of the Secret Door in any of your own work?

And if you liked the video, please check out the others in my series Harry Potter for Writers, and be sure to follow my channel!

Improve Your Writing with Harry Potter as Your Text!
The Harry Potter magic lives on as J.K. Rowling expands her wizarding world into new stories and formats. For five years, writers and fans from all continents have used A Writer's Guide to Harry Potter to delve beneath her pages' surface to discover the skill and artistry which created a story that enchanted audiences across generations. In this newly revised and expanded edition, S.P. Sipal takes you even deeper than before, exploring new techniques, and even peering into the artistic and marketing vision behind the upcoming Harry Potter and the Cursed Child and Fantastic Beasts and Where to Find Them.

No matter your genre, this guide will help you strengthen your writing by virtually apprenticing under a bestselling mentor. Through fifteen lessons, discover the expert techniques Ms. Rowling employs which makes her series such a phenomenal success and which will help improve your own craft and style.


Born and raised in North Carolina, Susan Sipal had to travel halfway across the world and return home to embrace her father and grandfather's penchant for telling a tall tale. After having lived with her husband in his homeland of Turkey for many years, she suddenly saw the world with new eyes and had to write about it. Perhaps it was the emptiness of the Library of Celsus at Ephesus that cried out to be refilled, or the myths surrounding the ancient Temple of Artemis, but she's been writing stories filled with myth and mystery ever since.