Robin Bridges, author of THE FORM OF THINGS UNKNOWN, on trunk novels evolving into something greater

We're thrilled to have Robin Bridges join us to share more about her latest novel THE FORM OF THINGS UNKNOWN. 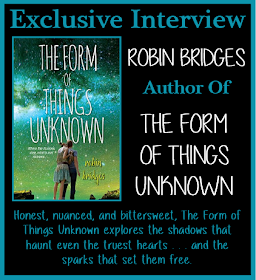 Robin, how long did you work on THE FORM OF THINGS UNKNOWN?

I started writing a different version of Natalie’s story, originally titled GHOSTLIGHT, almost ten years ago. (Right after I’d finished the first draft of DREAMING OF ANTIGONE.) Both of these stories changed drastically from first draft to published version, with new characters added and old ones deleted.

Looking back on the manuscript that was originally GHOSTLIGHT, and the story now published as TFOTU, I can see how much I’ve grown as a writer. The characters have much more depth and their relationships are more complicated. I’ve also learned the power of patience! I was so disappointed when I wasn’t able to publish GHOSTLIGHT all those years ago, but it just wasn’t the right way to tell the story. You never know when those forgotten trunk novels can evolve into something greater.

Thanks to my husband, I have a really groovy home office now where I do most of my writing. But on days when Tumblr/ Dragon Age/ Pinterest start tempting me too much, I’ll grab a notebook and pen and go to the local college library (USM Gulf Park!) to focus on writing. Sometimes I’ll take the notebook to the beach and sit in my car and write. I have Itunes playlists for every book I write, so I bring that music with me wherever I’m working.

I have more story ideas for Andria’s and Natalie’s friends, especially Natalie's new friend Maizy and her string trio. Right now, I’m still plotting and deciding whose story will get told first! Honest, nuanced, and bittersweet, The Form of Things Unknown explores the shadows that haunt even the truest hearts…and the sparks that set them free.

Natalie Roman isn’t much for the spotlight. But performing A Midsummer Night’s Dream in a stately old theatre in Savannah, Georgia, beats sitting alone replaying mistakes made in Athens. Fairy queens and magic on stage, maybe a few scary stories backstage. And no one in the cast knows her backstory.

Except for Lucas—he was in the psych ward, too. He won’t even meet her eye. But Nat doesn’t need him. She’s making friends with girls, girls who like horror movies and Ouija boards, who can hide their liquor in Coke bottles and laugh at the theater’s ghosts. Natalie can keep up. She can adapt. And if she skips her meds once or twice so they don’t interfere with her partying, it won’t be a problem. She just needs to keep her wits about her.

By day, Robin Bridges is a mild mannered writer of young adult fiction. By night, she is a pediatric nurse, poking small children with needles for a living. She lives on the Gulf Coast with her family and an ever-growing menagerie of cats, dogs, tropical fish, and parrots. But alas, she still does not have a unicorn.

Have you had a chance to read THE FORM OF THINGS UNKNOWN yet? Have you revisited a story you trunked years ago? Do you read previous writing and identify how you've grown as a writer? Share your thoughts about the interview in the comments!