Patrice Kindl, author of DON'T YOU TRUST ME?, on becoming absolutely obsessed with her character

We're delighted to have Patrice Kindl stop by to chat about her latest novel DON'T YOU TRUST ME? 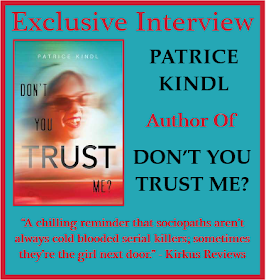 Patrice, what was your inspiration for writing DON'T YOU TRUST ME?

I was working on a very different kind of book (a comic Regency romance) with a character I mentally referred to as, "the psychopathic governess." Although my mental reference was a bit flippant, it made me pay attention to studies and news articles about personality disorders. When I realized how common they were, that they occur in all levels and kinds of societies, as well as the fact that they tend to come to full flower before or during early adolescence, I felt as though I had to write about it. And of course, it had to be a comedy.

I struggled with the decision about pushing two innocent girls down a flight of stairs and locking them in a basement. I could not decide how far I wanted the violence to go. One of the points I was trying to make with this book was that people without a moral sense are not necessarily mass murderers -- they are more often simply liars and thieves. It would have been easy to go overboard, or on the other hand to flinch away from anything physical (I don't even like squishing insects, personally).

How long did you work on DON'T YOU TRUST ME?

I got the idea two years before I wrote "The End" on the manuscript. However, I was working on another book at the time I thought of it and my idea had to wait its turn. I think it took a little over a year to write. I am not a fast writer.

It taught me that I am highly suggestible. I became absolutely obsessed with the character. Several times I could have sworn I saw her in the flesh. One time she nearly ran me over in her "borrowed" Corvette. On purpose, I might add. You'd think a fictional character would be grateful to her creator, but apparently not.

What do you hope readers will take away from DON'T YOU TRUST ME?

Not everyone out there is like you. Yes, the vast majority of people you will meet in your life are basically decent human beings. But there are those who do not care if, or how much, they hurt you. Be aware, and if a relationship begins to feel too one-sided, or if you suspect you are being consistently lied to, seriously consider ending it.

Certainly. Here you go: "Hah!" At least, this is almost the same word as "aha," but different. Should you happen to find out that there is a key to writing a novel, please send me one. I haven't a clue.

What's your writing ritual like? Do you listen to music? Work at home or at a coffee shop or the library, etc?
I work from home with my feet up and with at least one dog on my lap. The contortions required when both dogs and the computer require lap space are aging me before my time. I'm half crippled at the present moment (move your FOOT, dog!). Sometimes the parrot sings to me (catchy tunes like "Old MacDonald Had a Farm:" ... With a buck-buck here, and a buck-buck there ...), but usually no music.

Well, the standard advice is: read a lot and write a lot. It's hard to better that, especially as (see above) I have no idea what I am doing.

A sequel to DON'T YOU TRUST ME? entitled, FOOL ME TWICE, thus giving Morgan another shot at killing me off. A teenage girl switches identities with a stranger and pulls off a long-term scam in this smart, sarcastic thriller perfect for fans of Ally Carter.

Don’t you trust me? I mean, look at me. Blond, blue-eyed, the very image of innocence. Pretty enough, if you care about that kind of thing. I don’t.

But would a normal person switch identities with some wet mess of a girl at the airport, just to get her to stop bawling about being separated from her loser boyfriend and sent to live with some distant relatives? Nope, she wouldn’t. Yet I did. I’m not as normal as you think. And you’ll just have to trust me on that.

Patrice Kindl is the author of the acclaimed novels Owl in Love, Goose Chase, Keeping the Castle, A School for Brides, and several others. She lives with her husband and a variety of animals in upstate New York. Visit her at PatriceKindl.com.

Have you had a chance to read DON'T YOU TRUST ME? yet? Have you written a book with an unreliable narrator? Have you ever thought you saw your characters in real life? Share your thoughts about the interview in the comments!