M-E Girard, author of GIRL MANS UP, on preparing yourself for many revisions

We're pleased to have M-E Girard stop by to tell us more about her debut novel GIRL MANS UP. 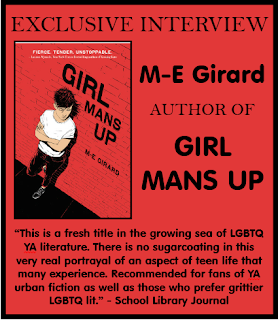 M-E, how long did you work on GIRL MANS UP?

GMU started as an idea for a submission to a 2010 writing contest. I came up with the title and wrote an opening paragraph for the contest, and I ended up being a finalist, which meant I actually had to follow through and write the book. I worked on it on and off after that, going through multiple drafts. It sold in the fall of 2014. So from spark of an idea to publication, there will have been 5.5 years. Not bad, considering I’ve also worked on some short stories and many novel manuscripts during that time!

My advice would be to prepare yourself for the number of times you’re going to have to come back to your story to revise it. You’re going to be so glad that it’s finished only to get yanked back to make changes--and that will likely happen multiple times throughout its journey from manuscript to book. You might even start to dislike the story and/or characters, or you might doubt its worth—but if at the end of each revision, you’ve got a stronger story, then you’re on the right path, so keep going! Revision is really what takes the story from “all right” to “pretty freaking great.”

I am working on a couple things, and they are both contemporary YA stories that take place in the same town GMU is set in. I’m not really into the sequel thing, but I’ve always liked the whole Degrassi thing, where the setting (in my case, a town) is fixed and characters with independent stories cross paths from time to time. Pen may or may not be making an appearance in other stories… ;) All Pen wants is to be the kind of girl she’s always been. So why does everyone have a problem with it? They think the way she looks and acts means she’s trying to be a boy—that she should quit trying to be something she’s not. If she dresses like a girl, and does what her folks want, it will show respect. If she takes orders and does what her friend Colby wants, it will show her loyalty.

But respect and loyalty, Pen discovers, are empty words. Old-world parents, disintegrating friendships, and strong feelings for other girls drive Pen to see the truth—that in order to be who she truly wants to be, she’ll have to man up.

M-E GIRARD is a Canadian writer of contemporary fiction---mostly young adult fiction, sometimes new adult fiction, usually queer fiction, and always about girls. Her debut novel GIRL MANS UP will be published in September 2016 by HarperTeen/HarperCollins and HarperCollins Canada. M-E was a fellow of the 2013 and 2015 Lambda Writers Retreat for Emerging LGBT Voices. Her writing has appeared in Plenitude Magazine. M-E is a member of the Society of Children's Book Writers and Illustrators and the Writers' Community of Durham Region.

Have you had a chance to read GIRL MANS UP yet? Have you ever disliked your story/characters because of multiple revisions? Have you considered a series of novels with a fixed setting but characters with independent stories? Share your thoughts about the interview in the comments!