We're excited to have Kat Spears join us to share more about her latest novel THE BOY WHO KILLED GRANT PARKER. 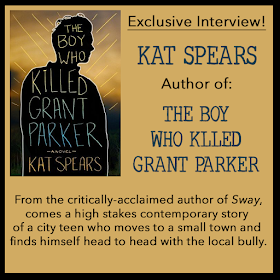 Kat, what was your inspiration for writing THE BOY WHO KILLED GRANT PARKER?

THE BOY WHO KILLED GRANT PARKER is loosely based on the old John Wayne western, THE MAN WHO SHOT LIBERTY VALANCE. The movie is a bit cheesy (okay, a lot cheesy), but the underlying story idea is an interesting one. Luke, the main character, becomes a hero in the eyes of his classmates, because of a lie, or rather an unspoken truth. So, he’s not really appreciated for who he is at all. Which I guess is somewhat true for all of us.

The scene from GRANT PARKER that I love the most is when Luke goes to the hospital to find out if Grant is alive or dead. It was probably one of the easiest scenes to write because dialogue is always easy for me to write and in this scene Luke is carrying on a dialogue with his inner voice. I love Luke’s inner voice. It’s my own voice injected into the story.

How long did you work on THE BOY WHO KILLED GRANT PARKER?

I always work on a story in my head for a few months, and describe the proposed plot verbally to friends or random strangers who sit at my bar as I work through a mental outline. I start putting words to paper about six or eight months after hatching the idea. The writing process itself takes about nine months to a year, including the work I do with my editor to finalize the nuances. All told, from concept to finished work, it took me about 18 months to produce THE BOY WHO KILLED GRANT PARKER.


What do you hope readers will take away from THE BOY WHO KILLED GRANT PARKER?

If everyone who reads THE BOY WHO KILLED GRANT PARKER just gets a few good laughs out of it, that would make me happy enough.

I’m currently working on a manuscript called 87 DAYS. It’s a love story. Sort of. I call it a “comedy of depression.” It should be out in September 2017, again from St. Martin’s Griffin. Luke Grayson's life might as well be over when he's forced to go live in rural Tennessee with his Baptist pastor father. His reputation as a troublemaker has followed him there, and as an outsider, Luke is automatically under suspicion by everyone from the principal at his new school to the local police chief. His social life is no better. The new kid in town is an easy target for Grant Parker, the local golden boy with a violent streak who has the entire community of Ashland under his thumb.

But things go topsy-turvy when a freak accident removes Grant from the top of the social pyramid, replacing him with Luke. This fish out of water has suddenly gone from social outcast to hero in a matter of twenty-four hours. For the students who have lived in fear of Grant all their lives, this is a welcome change. But Luke’s new found fame comes with a price. Nobody knows the truth about what really happened to Grant Parker except for Luke, and the longer he keeps living the lie, the more like Grant Parker he becomes.

I write about beautifully flawed people, because those are the people I know. If you want only happy endings, then I'm definitely not the author for you. I am a novelist, bartender, mother of three freeloading kids, and, apparently, the only person on the planet who reads in the shower. I am the author of SWAY and BREAKAWAY. The forthcoming THE BOY WHO KILLED GRANT PARKER will be released in September 2016, also from St. Martin's Press. Follow me on Twitter at katwritesbooks and Instagram at katwrites or follow my playlists on Spotify at katbooks.

Have you had a chance to read THE BOY WHO KILLED GRANT PARKER yet? Have any of your stories been inspired by a movie? Do you find that writing gets harder the longer you do it? Share your thoughts about the interview in the comments!