We're pleased to have J. Patrick Black with us to share more about his debut novel NINTH CITY BURNING.

What was your inspiration for writing NINTH CITY BURNING? 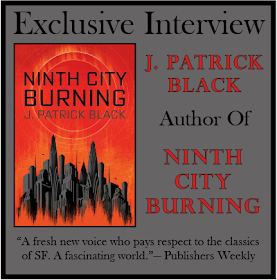 There wasn't really a single flash of insight that lead to Ninth City Burning; it came together gradually. I'd had some pieces of the narrative--characters, events, settings--floating around for years, while others were relatively new developments. I didn't even think of them as part of the same story, necessarily--many came from different genres or time periods. They were just interesting tidbits occupying different spaces of my brain. It wasn't until I had the idea for two of my central characters that a book really began to take form. I was thinking about how a young person raised in a stable, even privileged environment--the sort of life I'd taken for granted as a kid--would react to suddenly ending up in the middle of a war. This was around the time the Syrian Civil War was really starting to make the news, so I'm sure those events had some influence on my thought process. I asked myself what sort of war would require a soldier like that, beyond the kinds of desperate battles--Stalingrad, for example--where anyone capable of firing a gun was being sent to the front lines, and my answer to that question gave me the first characters unique to Ninth City Burning. Once they were there, all those other narrative tidbits began to coalesce around them until I had a plot, a cast, a story, a book.


How long did you work on NINTH CITY BURNING?

Well, that depends on how you look at the question. The draft that eventually got the attention of my agent took about ten months to write, but I'd written a draft before that (quickly, for me: about three months), and I'd spent several months working on the background and world of the story previous to getting started with the actual writing. After I signed with an agent, we worked on revisions together, and about four months later we were sending the new draft out to editors in the hope someone would want to buy it--Ace Books eventually did (hurray!), and then there was another round of revisions with my new editor, followed by a few shorter passes, then copyediting, and finally--finally!--the finished product. From the first glimmer of a premise to publication: about three years, all in!

For the most part I work at home. That isn't to say I don't like public spaces--only that home has been best for me as an everyday ritual, mostly for matters of practicality. A lot of places simply aren't open during the hours I often like to work (very early in the morning, for example), and for longer writing session I've found the home environment keeps you from having to worry about finding a bathroom or what you'll do with your laptop while you're in there (ask someone to watch it for you? actually take it in there? both options have their weak points...). That said, I do really like the activity and energy of a coffee shop; a little ambient noise can really help me focus (though I find music, especially music with lyrics, distracting), so occasionally I'll treat myself to a writing field trip: a cafe, a pub, a park--anyplace where there'll be something interesting happening whenever I look up from my screen.

Start small. If you're setting out to write your first novel, try beginning with a simple subject, something easy to refine and clarify, something you wouldn't mind rewriting two or three times. If you've read Ninth City Burning, that might sound like strange advice, since my book does feature a pretty large breadth of subjects and perspectives, but even though it's my debut novel, it isn't my first. I've written others that didn't quite make it to publication, and they were all pretty huge undertakings, both in terms of scope and sheer word count (one came in at around 1400 pages). It was great preparation for this book, the one that finally found a publisher, but it took a long, long time to get there. I wish I'd begun with a project that made it a little easier to learn the process of writing and revising a novel--something that, in my experience, requires practice in itself.

Ninth City Burning is the first in a series, so right now I'm hard at work on Book Two. I've always (well, almost always) got other snippets of stories tumbling around my head, though, and every so often I'll pick one up and play with it for a while in the hope it'll grow up into a full-fledged book. I've got an idea for a novella a little more toward the magical realism end of the spectrum, and I'd love to do a graphic novel if I could find an artist willing to take me on (my own skills aren't quite up to the task in that regard). For the most part, though, I'm trying to stay ahead my characters and make sure they've got a book to live in.

Centuries of war with aliens threaten the future of human civilization on earth in this gripping, epic science fiction debut...

We never saw them coming.

Entire cities disappeared in the blink of an eye, leaving nothing but dust and rubble. When an alien race came to make Earth theirs, they brought with them a weapon we had no way to fight, a universe-altering force known as thelemity. It seemed nothing could stop it—until we discovered we could wield the power too.

Five hundred years later, the Earth is locked in a grinding war of attrition. The talented few capable of bending thelemity to their will are trained in elite military academies, destined for the front lines. Those who refused to support the war have been exiled to the wilds of a ruined Earth.

But the enemy's tactics are changing, and Earth's defenders are about to discover this centuries-old war has only just begun. As a terrible new onslaught looms, heroes will rise from unlikely quarters, and fight back.

J. Patrick Black has worked as a bartender, a lifeguard, a small-town lawyer, a homebuilder, and a costumed theme park character, all while living a secret double life as a fiction writer. While fiction is now a profession, he still finds occasion to ply his other trades as well. He lives in Boston, Massachusetts, where he likes to visit the ocean. NINTH CITY BURNING is his first (published) novel. He is at work on his next book.

Have you had a chance to read NINTH CITY BURNING yet? Have you ever had lots of small ideas finally coalesce into a complete book idea? Do you like the activity and energy of a coffee shop for writing? Share your thoughts about the interview in the comments!