Irena Brignull, author of THE HAWKWEED PROPHECY, on searching for a detail in the scene

We're thrilled to have Irena Brignull join us to share more about her novel THE HAWKWEED PROPHECY. 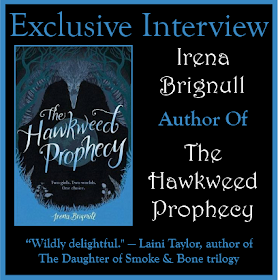 Irena, what was your inspiration for writing THE HAWKWEED PROPHECY?

The inspiration came from my kids. My youngest had been seriously ill in hospital and once he was recovered, a friend invited us to stay with her in Italy. Not having had the time to think for so long, I had this week in the spring sunshine where all the kids were running around, healthy and happy, and suddenly my imagination could spark again. I really came up with this story for them.

I found the big battle scene near the end the hardest to write. For me, the more intimate scenes with dialogue are a lot easier. The battle needed to feel epic in scale but I wanted to keep my eye on the detail too. It was definitely tricky to choreograph. I usually write screenplays and this was the one scene in the book where I wish I had a director to collaborate with.

The scene I particularly love is the one where the spiders spin their warning on Poppy’s ceiling. To me, it feels so visual and atmospheric - both creepy and beautiful at the same time.

Some of the books that resonated with me with regards to Hawkweed were The Lion the Witch and the Wardrobe, The Crucible and Macbeth for the witches and the prophecy. Dodi Smith’s I Capture the Castle and Rainbow Rowell’s novels for the intensity of friendship and sisterhood. And the stories of Neil Gaiman, Alice Hoffman and Karen Foxlee for the magic and fairytale. I’d love to think that readers would find this too.

How long did you work on THE HAWKWEED PROPHECY?

I worked on it for nearly two years, from the moment that I first had the idea through to the book being edited and proof-read and going to print.

It definitely taught me stamina. Writing the first draft of the novel took me months longer than the first draft of a screenplay. It’s a very long journey when the rest of my life seems so rushed. I really had to adjust to the slower pace and learn how to take my time. It also taught me that with words come ideas. Often I’d look at a blank page and wonder how on earth to fill it. Then I’d start to type and somehow, miraculously, the words would form and the story would take shape.

What do you hope readers will take away from THE HAWKWEED PROPHECY?

I was really interested in the idea of a group of women living outside of society, with no contact with the rest of the world or the opposite sex. I hope readers might think about both the positives and negatives of this community. The witches have escaped the pressures of beauty and body image and focus on the power within themselves. They put sisterhood above all else, they live off the land and are part of nature but they have also sacrificed so much, especially relationships with men, love, marriage etc. I’d also love readers to take away the notion of how they might react if they thought they knew their fate. The prophecy in the story triggers so much harm.

I feel very blessed to say that my road to publication was straight and short. Before writing a book, I wrote screenplays and I have certainly experienced my fair share of rejection there. But it meant I already knew a book agent who had once suggested I write a novel. So I sent the first 100 pages of The Hawkweed Prophecy to her and that agency took me on. They sent out the finished manuscript and I was lucky enough to have publishers bid for it in the UK and US and even in Europe. I could hardly believe it. It was a truly magical few weeks.

I think it was after I wrote the first three chapters and then ground to a halt. I had loved starting the book and writing without knowing where I was heading but suddenly I felt lost. I returned to my screenwriting experience and made myself sketch out a storyline. It was then, as the plot unfurled, that I knew I had a book on my hands.

I mostly work from home in my tiny office at the top of the house but I have been known to write in my car whilst waiting for my kids to finish sports practice. I try to listen to music but before the first song is even over, I’ve usually stopped hearing it and am lost in the words and world that I’m writing about.

I doubt other writers need advice from me but I’d say to anyone thinking of writing and not feeling confident enough (as I once did) to keep writing. Write anything - emails to friend, poems, songs, reviews, stories. It is a craft that really does improve with practice. And one tip - whenever I’m stuck I always search for a detail in the scene, something small that becomes my way into the moment.

I’m finishing the sequel to The Hawkweed Prophecy. I really want The Hawkweed Legacy to be a story in its own right so have tried to be more ambitious with it. I’m also just starting a treatment for a new tv series which I’m excited about.

Poppy Hooper and Ember Hawkweed couldn’t lead more different lives. Poppy is a troubled teen: moving from school to school, causing chaos wherever she goes, never making friends or lasting connections. Ember is a young witch, struggling to find a place within her coven and prove her worth. Both are outsiders: feeling like they don’t belong and seeking escape.

Poppy and Ember soon become friends, and secretly share knowledge of their two worlds. Little do they know that destiny has brought them together: an ancient prophecy, and a life-changing betrayal. Growing closer, they begin to understand why they’ve never belonged and the reason they are now forever connected to each other.

Switched at birth by the scheming witch Raven Hawkweed, Poppy and Ember must come to terms with their true identities and fight for their own place in the world. Enter Leo, a homeless boy with a painful past who – befriending them both – tests their love and loyalty. Can Poppy and Ember’s friendship survive? And can it withstand the dark forces that are gathering?

Irena Brignull is an acclaimed screenwriter whose credits include The Boxtrolls, Come Together, Skellig, and the upcoming adaptation of the beloved classic, The Little Prince. Previously, Irena was a Script Executive at the BBC and then Head of Development at Dogstar Films where she worked on Shakespeare in Love, Captain Corelli’s Mandolin, I Capture the Castle, and Bravo Two Zero. She holds a BA in English Literature from Oxford University.

Have you had a chance to read THE HAWKWEED PROPHECY yet? When faced with a blank page, do you just start typing and watch the story take shape? Do you write in various formats to improve your craft with practice? Share your thoughts about the interview in the comments!