Gae Polisner, author of THE MEMORY OF THINGS, on starting a new book and sewer grates

We're delighted to have Gae Polisner here to tell us more about her latest novel THE MEMORY OF THINGS.

Gae, what was your inspiration for writing THE MEMORY OF THINGS? 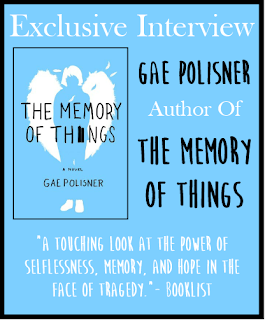 I had a sort of two-pronged inspiration for this book: the first, my desire to process my own trauma of 9/11 through my writing, and second, the inspiration for the mystery about the girl at the heart of the story, which presented itself in a true-to-my-life story.

As for the first prong, as a native New Yorker (I had lived in NYC for years before moving back to Long Island when my first son was born), I had definitely been drawn to write about 9/11 since shortly after it had happened, but knew for a long time that it was just too soon to do so. Then, a few years ago, I was finishing up another manuscript and this very strong image popped into my head, one of a girl, crouched in fear, covered in smoke and ash, wearing a pair of costume wings. I knew the ash was the dust from the twin towers, but not why the wings were there.

Right around the same time, a dear friend of mine had a sudden bout of “transient global amnesia.” She was driving to work, forgot where she was going, basically forgot who she was, yet somehow knew to call her husband, and kind of knew who he was, or at least that he was connected to her. At the hospital, scans showed no stroke or other brain injury or problem so they sent her home like that. No one knew what caused it or what it even really was, but a friend of hers had died suddenly a day or two before so the doctors surmised the amnesia was brought on by the pressure of emotional trauma. It was freaky, to say the least, passing after a day or two on its own, leaving her as she’d been before.

So, the girl came to me, in her wings. And then that happened with my friend. And I knew right away that they belonged together, that the girl had suffered some trauma related to the towers, which triggered, at least in part, her amnesia, and that, along with Kyle, I was going to have to figure out who she was and why she was where Kyle finds her.

Some of my favorite scenes are the Cow and Chicken scenes between Kyle and the girl because they bring such light, fluffy absurdity to the dark somberness of what’s going on all around them. And so it allows them to connect on something mindless and easy, that doesn’t make any sense …

Another scene that I love that seems to be really resonating with my early readers is on p. 183. It takes place at Coney Island. . . something the girl says when she tries to make sense of how she feels (and why she’s just done what she’s done to Kyle). I’ve seen a few reviewers highlighting the same section from that page, and I remember feeling like the words were just right when I found them – and wrote them down.

How long did you work on THE MEMORY OF THINGS?

Who can ever remember when all is said and done? I worked on the first draft for probably 6 – 8 mos, then my agent gave it back with concerns and I rewrote and revised for several months. My then- editor turned it down (first and foremost, she hadn’t really wanted a “9/11” book), and I rewrote it again (making the 9/11 stuff stronger – Hah! Er, um). Then I rewrote it a few more times after that. Then, when the fabulous Vicki Lame of St. Martin’s Press finally got her hands on it, and truly got it -- like understood every moment of it -- and snatched it up, of course, it went through more revisions, while other manuscripts were worked on in between.

So, a few years on and off.

What was the question again?

Every new book I write teaches me the same thing: I have no idea how I write a book. And, each time I do, it’s its own little shocking miracle.

What do you hope readers will take away from THE MEMORY OF THINGS?

That it’s okay – and, in fact, necessary -- to laugh and love in the darkest of times.

The sense that it will always be our small, genuine human connections that save us.

And, some visceral feeling of hope.

Well now I feel badly about my answer up there about not being taught anything from writing this book. Like I owe you and your readers that hope, that “AHA!” moment. Like I should change my answer and tell you that after three published books, and a fourth under contract, I now know lots and have The Key.

But you know those sewer grates in the street, and that moment you step out of the car and the key slips out of your hand and drops with a distant, hollow, wet, thud into the echoing abyss?

Yeah, that’s me, every time I finish a book and stare down a new one.

Wait, no, that’s not completely the case. Because as I stand there keyless, into the abyss, this thought does cross my mind: “I’ve done it before. I can do it again.”

So, that’s something right? That right there is crucial.

I mostly work at home, mostly standing at a baby grand piano that doesn’t play, that we inherited years ago (it’s merely a glorified piece of pretty furniture) and type away at my laptop.

When I have a rough draft, I will print it up and go somewhere else quiet with the hardcopy to read through and start marking it up (a/k/a ripping it to shreds), often the library or a coffee shop (but only outside in nice weather on the latter, because I absolutely cannot write with music on. Oh, how I wish I could).

In the summers, I’ll sometimes write in my “outside office” a/k/a in my backyard, poolside, at a small table under an umbrella. Which is the writerly equivalent of the blissful best.

A favorite Theodore Roosevelt quote another teacher/writer shared with me a few years back: “Comparison is the thief of joy.”

I have to repeat that one to myself, still, constantly.

I’m working on revisions for my next book with Vicki Lame, my extraordinary editor for THE MEMORY OF THINGS at St. Martin’s Press. Coming Winter 2018, I think.

And, yeah, typing those words make me so freaking thrilled. The powerful story of two teenagers finding friendship, comfort, and first love in the days following 9/11 as their fractured city tries to put itself back together.

On the morning of September 11, 2001, sixteen-year-old Kyle Donohue watches the first twin tower come down from the window of Stuyvesant High School. Moments later, terrified and fleeing home to safety across the Brooklyn Bridge, he stumbles across a girl perched in the shadows. She is covered in ash and wearing a pair of costume wings. With his mother and sister in California and unable to reach his father, a New York City detective likely on his way to the disaster, Kyle makes the split-second decision to bring the girl home. What follows is their story, told in alternating points of view, as Kyle tries to unravel the mystery of the girl so he can return her to her family. But what if the girl has forgotten everything, even her own name? And what if the more Kyle gets to know her, the less he wants her to go home? The Memory of Things tells a stunning story of friendship and first love and of carrying on with our day-to-day living in the midst of world-changing tragedy and unforgettable pain—it tells a story of hope.

GAE POLISNER is the award-winning author of The Summer of Letting Go (Nerdy Book Club Best YA 2014, Teen Ink Editor’s Choice Badge of Approval) and The Pull of Gravity (2012 Bank Street Best, 2012 PSLA Top Forty, Nerdy Book Club Best YA 2011). She also co-hosts Teachers Write!, a virtual writers camp for teachers and educators. She lives in Long Island, New York with her family.

You can learn more about her here: http://gaepolisner.com

Have you had a chance to read THE MEMORY OF THINGS yet? Do you feel writing a book is its own little shocking miracle? Are you mindful that “Comparison is the thief of joy.”? Share your thoughts about the interview in the comments!