Chris Vick, author of KOOK, on making it simple and clear

We're pleased to have Chris Vick swing by to give us the scoop on his debut novel KOOK. 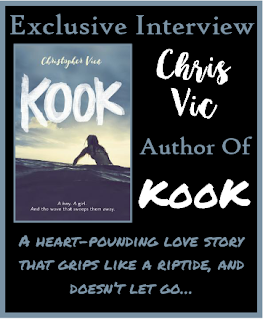 Chris, what was your inspiration for writing KOOK?

First love, surfing, danger and beauty: how it is to be a teen boy, in love with a girl, but also the whole surf lifestyle. In both cases, being in danger and out of your depth, but unable to stop.

The other inspiration is great writing, from YA authors like Meg Rosoff, David Almond, Lucy Christopher, Julia Green, Stephen Chbobsky and Alexi Sherman.

There is the scene where Sam loses his virginity, and another where he almost drowns. They were hard to write, but rewarding too. They were hard, I guess - if I'm honest - because they are so personal.

I can't really compare Kook with other books, as they are different in lots of ways. But in the spirit of 'if you like this, then you'll like this too,' I'd say: How I live now, by Meg Rosoff, and The perks of being a wallflower by Stephen Chbobsky.

How long did you work on KOOK?

I wrote a good chunk of Kook as part of a Masters degree at Bath Spa University, working closely with Lucy Christopher (author of Stolen) as an editor/mentor. Then there were edits from my agent, publisher...I think it was two years, all told.

I learnt that writing about my younger self's experiences and failings isn't just an option. It's a necessity. For me at least. It boils down to that old Hemingway adage: Write what you know. Neil Gaiman once said: It needs to feel like you are walking down the street naked. I thought that was an odd thing to say, when I read it. Now it makes total sense.

I'm saying 'for me', as I know lots of writers have a totally different view and experience. I've also learned that writing is very, very difficult at times. And that that's okay; that it can take a lot of effort just to get something simple and even half way effective. They key is to keep going.

What do you hope readers will take away from KOOK?

Lots of readers have - very kindly - said it's a book that stays with you. So what is it they take away? I hope a sense of the beauty and sensual wonder of the world; and of love too. But also of the quick and dangerous nature of living and of some of its wilder experiences; that there are limits, and risks that aren't worth taking.

Oh boy! I was writing for over ten years and have, um, four part or wholly drafted 'novels' in drawers or the darker corners of my computer files, gathering dust. Which is exactly where they belong.

I didn't realize when I started writing that this is entirely normal. Most writers get published after a few 'practice,' books, and once they've found their voice. Which makes sense. Nothing comes easy, right?

So Kook, was the final step on a long journey. Once I'd actually written it, the path to publication was fast and straightforward. It was getting to that point that made my eyeballs bleed.

There were a few of those. The most important was when someone said: Work out what you want to say, then say it as clearly as possible. So obvious, yet so easy to miss. I'm not one for doling out advice... but if I did, I'd say Keep It Simple. Don't cloud what you're doing with unnecessary plots, characters, lengthy descriptions etc.

You don't have to (try to) write a masterpiece, just a book that people will enjoy reading and which will - hopefully - affect them.

There was also a point where I had to admit to myself that the writing was being hijacked by memories of first love and days spent in the water. And to go with that, rather than fight it.

Ritual, schmitual. It varies. A lot!

I used to get up super early as I had a full time job and young family. So that 'ritual' was born from necessity.

If I kept one lesson from those times, it's that morning is when I'm most productive. Though maybe that's to do with the macchiato habit.

Another habit or ritual is that I often start by rereading the last piece I wrote. I then cut a lot, rewrite some of it, and only then get into something fresh.

These days I write in cafes, in bed, on the train, on the beach. Wherever. I listen to music a lot on first draft, as a way of shutting the world out, and sometimes to match the tone of the scene I'm writing, and to inspire me. However, when I'm editing and re-writing, it's really about making sense and order from a total hash of words and scribblings. Boringly, that seems to require total silence and keen focus.

Read lots, write lots. Seems obvious but it's amazing how many would-be writers don't actually read that much or that widely. And if you want to write and you're not a book junky, what are you thinking?

Also see above re: making it simple and clear.

Lastly; keep going. Again, I'm amazed how many people give up after writing one book. I think a lot of people who get published, got published, in part because they never quit. They just keep writing. And not even with the expectation of being published, but because they are addicted.

What are you working on now?
I'm working on edits for the follow up to Kook. The draft title is Storms.

I'm also starting something new: a story of love and survival; of a boy and a girl lost, in a boat, on the ocean. A heart-pounding love story that grips like a riptide, and doesn’t let go…

Fifteen-year old Sam has moved from the big city to the coast – stuck there with his mum and sister on the edge of nowhere.

Then he meets beautiful but damaged surfer-girl Jade. Soon he’s in love with her, and with surfing itself. But Jade is driven by an obsession: finding and riding a legendary huge wave no one has ever ridden.

As the weeks wear on, their relationship barrels forward with the force of a deep-water wave – into a storm, to danger … and to heartbreak.

I live near Bath with my wife, daughter and surf-rat-of-a-dogToffee.

I have worked in marine conservation for years.

Though I live in-land, work, writing and surfing take me to the sea pretty often.

When I’m not working, writing or surfing I’m playing footy, reading, cooking, watching Game of Thrones, or listening to the Chemical Brothers

I listen to music when I write. It helps shut the world out.

Have you had a chance to read KOOK yet? Do you ever find your writing hijacked by your memories? Are you addicted to writing? Share your thoughts about the interview in the comments!