Adam Selzer, author of JUST KILL ME, on the helpfulness of Korean spas

We're thrilled to have Adam Selzer here to tell us more about his latest novel JUST KILL ME. 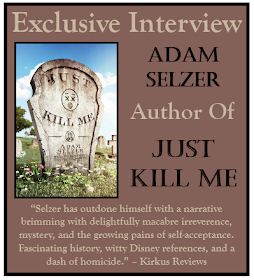 Adam, what was your inspiration for writing JUST KILL ME?

JUST KILL ME is about a ghost tour guide who makes places more haunted by killing people at them. I worked in the ghost tour business for years, and there were lots of customers who really got on my nerves, so.

I wrote the scene where Ricardo asks Megan to put on a gorilla mask in order to help kill Mrs. Gunderson over and over again. It was okay the first time, but you only get to a write a scene like that every so often, and I didn’t want to blow it.

Yeah, there was. This was a tricky plot for me; noir mysteries are always hard. And there’s one plot point towards the end that I just couldn’t figure out for the life of me. I tried all the tricks to get ideas - playlists, long drives, etc. I usually say that that stuff doesn’t work; if the ideas aren’t coming, you can run naked through a thunderstorm chanting lines from The Odyssey and playing a violin and it won’t spur a single idea, just a reputation as a bad role model (people are so uptight these days). But this time I stressed and stressed, nearly tore my hair out, then went to one of those Korean spas where they have super-hot charcoal saunas. I sat in one for a while, and figured out the twist. From the author of Play Me Backwards and I Kissed a Zombie and I Liked It comes a dark comedy about one teen’s unusual summer job as a ghost tour guide in Chicago.

When the last letters in her alphabet cereal are D, I, and E, she doesn’t crawl right back into bed. When her online girlfriend won’t text a photo, she just sends more of herself.

And when she realizes that Cynthia, her boss at a Chicago ghost tour company, isn’t joking about making stops more haunted by killing people there, she doesn’t quit her job—she may even help.

But who is responsible for the deaths of prominent figures in the murdermonger industry? Could it be the head of the rival tour company? Or could it be someone near and dear to Megan?

Soon after she learns that she has an uncanny resemblance to a flapper who disappeared in 1922, Megan receives a warning she can’t ignore: the next ghost on the tour might be her…

Adam Selzer was born in Des Moines and now lives in Chicago, where he writes humorous books by day and researches history, ghost stories and naughty playground rhymes by night. After sixteen published books, including the acclaimed Smart Aleck’s Guide to American History and I Kissed a Zombie and I Liked It, he is just famous enough to have a page on wikipedia.

His most recent novel is Play Me Backwards. In 2015 he will have two new nonfiction books; one on silent film production in Chicago (Flickering Empire, co-written with Michael Glover Smith, Columbia University Press) and one on Abraham Lincoln ghostlore (Ghosts of Lincoln, Llewelyn).

Have you had a chance to read JUST KILL ME yet? What tricks do you use to get ideas flowing? Where is the most unusual place you have figured out a plot point? Share your thoughts about the interview in the comments!