Writing, Lying and Being True to Yourself

Today we are happy to welcome Jen Fulmer, represented by Taylor Martindale Kean of Full Circle Literary, to the blog as she talks about the importance of lying in writing and staying true to yourself.

"As writers, we take great joy in getting to tell lies for a living. Beautiful, compelling lies—with an undeniable core of truth—but...lies...nonetheless. But being a writer isn’t just about your ability to craft a story, a lie, complete enough to ensnare your reader and make them feel its truth...It also means learning to be honest with yourself."

Being a writer means getting to create entire worlds, both the epic and the personal. It means finding ways to convince your reader those worlds are real and important. In that sense, it’s a lot like lying (in a good way!). As incredible former-Literary-Agent-turned-author Nathan Bransford said in his article, What Writing and Lying Have in Common, “in both cases, you're trying to get someone to believe something that isn't true and using words to try and pull the wool over their eyes”.


As writers, we take great joy in getting to tell lies for a living. Beautiful, compelling lies—with an undeniable core of truth—but in the strictest sense of the word, lies, fabrications, nonetheless. But being a writer isn’t just about your ability to craft a story, a lie, complete enough to ensnare your reader and make them feel its truth. It isn’t just about critique partners and agents and book deals. It isn’t just about networking and marketing and self-promotion.


It also means learning to be honest with yourself.


Being honest with yourself doesn’t sound very hard, and does come easily for some. For others it’s a matter of experience, because you can’t always tell you’re deceiving yourself. But whenever things are going poorly in drafting or revisions, I’ve learned it's because I'm not being truthful to myself, or to the book. Instead I’m forcing myself to think I can make something work, that I want to make it work. But when I step back and look at my discomfort with what I'm trying to do, when I acknowledge why it's making me uncomfortable—that's the only time I'm able to get myself back on track.


"But whenever things are going poorly in drafting or revisions, I’ve learned it's because I'm not being truthful to myself, or to the book."


When I received my first Revise and Resubmit (where an agent reads your manuscript, thinks it has potential but isn’t ready, and gives you the opportunity to make changes and send it back to them for additional consideration) I didn’t intend to lie to myself. I didn’t even know I was doing it. I fought through that horrible feeling in my stomach in an effort to reach that Ultimate Goal—an agent. I told myself the sacrifices I would have to make to accommodate the agent’s requests were worth it.


But it simply wasn’t true. The book lost a huge part of its heart. The agent thought so too. She passed on the chance to represent me. If I hadn’t already been so deeply entrenched in querying at the time, I may have given up on that manuscript.


When I received my second Revise and Resubmit, I was nervous from my experience the first time around. But after having been querying that novel for eight months I wasn’t certain I’d get another chance. (It didn’t hurt that the request came from a highly-respected agent.) She proposed to do a partial R&R, to see how we worked together and if our ideas meshed, rather than having me rewrite the whole book. It seemed like too good an opportunity to pass up, and I agreed to give it a shot.


This time when I got the agent’s notes I felt the rightness of the proposed changes. There were no sinking stomachs, only too-fast beating hearts. This agent saw through the layers of pretty lies I’d woven with my words to the story’s core of truth. She saw the heart of the book, even though I’d edited too much of it out during the previous R&R. I knew what was being requested would be a significant change, but I wasn’t just resigned to it—I was eager. Because this agent opened the door for me to be honest with myself and my story again. And in the end, I signed with her.

Why am I struggling to draft or revise this scene? Have I lost the heart of what it means to me? How can I find that again? In this instance, I had the assistance of an amazing agent to help me. But you can find ways to be honest with yourself all around, from exchanging your work with critique partners, to reading published books, to stopping to look at something that fascinates you.


A few months ago I was visiting an art museum with my husband and a good friend. Both of them would immediately go straight to the piece in the room that most interested them. But I kept holding myself back, because the things I was interested in were invariably the most “girly” objects in the room. Because both of my museum-visiting companions were male, I assumed (incorrectly) that what interested me wouldn’t interest them. After half a dozen rooms with that sinking-stomach feeling growing more prevalent, I finally decided it was silly to keep holding myself back. Wasn’t I supposed to be having a good time too? I scanned the next room we walked into and went straight for the first shiny gold jewelry-like thing I saw.


When I read what the object was, an entire novel sparked in my head. That’s the book I’m outlining now. Both my husband and my friend were equally fascinated by the artifact. We spent the rest of the day discussing it and my new novel.

"And I never would have seen it, never would have had the book idea, if I’d kept telling myself that my instinctual interests weren’t worth pursuing. I made a choice, in that moment, to be honest with myself. And I’m very glad I did." 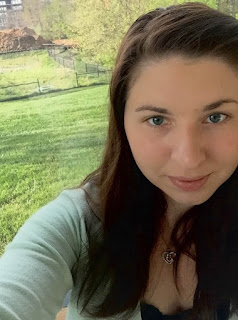 Jen Fulmer was born in Louisiana and hasn’t been back since – something she intends to remedy as soon as possible. She grew up in New Hampshire, but now lives with her husband, daughter, and two cats in the suburbs of Baltimore, Maryland. She studied Architecture in college and works as a Construction Manager by day, toddler-wrangler by evening, and writer of YA Fantasy and Steampunk by night.

She loves all things fantastical, from high fantasy, to alternate history, to stories of our world reimagined with magic. She’s fascinated by the turn of the century, and especially in finding ways to blend those cultures with traditional fantasy trappings. In the real world, Jen loves audiobooks, sewing, needlepoint, baking, and is learning to read tarot.