Please join us in welcoming Cristin Bruggeman, represented by Thao Le from the Sandra Dijkstra Literary Agency, to the blog today as she discusses the importance of surviving Act II and why you shouldn't ever take the easy way out.

"There's always a period of time between what you set out to do and achieving your goal, and that period is filled with struggle...and the eventual realization that there is no shortcut to a dream fulfilled. This is Act II"


My favorite blog posts are those 'how I got my agent' stories. It's wonderful to see perseverance rewarded, struggles and rejection given meaning. I follow those writers on Twitter, and I'm rooting for them to get a book deal and great sales. I care about them because they shared their stories, and because their struggles reflect what we all endure for our art.


There's always a period of time between what you set out to do and achieving your goal, and that period is filled with struggle. It holds the restlessness of hope unrealized, the sting of rejection, and the eventual realization that there is no shortcut to a dream fulfilled. This is Act II, and maybe you're in it right now. I still am. Even after I signed with a really great literary agent, I had to face the challenge of ripping the seams out of my manuscript and starting over—multiple times. (As many times as it takes!)


"Consider what we put our characters through in Act II. We toss them in the deep end, so they realize they can't swim...They look for every easy way out, but we close those doors...until the only path forward is the road of hardship."


Consider what we put our characters through in Act II. We toss them in the deep end, so they realize they can't swim. They learn that they aren't smart enough or strong enough to resolve the conflict. They look for every easy way out, but we close those doors on their faces until the only path forward is the road of hardship. In the School of Hard Knocks, they're refined and empowered—they earn their passage into Act III.

That's why telling writers to grow a thick skin is such bad advice. Avoiding the suffering of Act II will only prolong it. We're here to learn what we need to carry us into the next part of our stories. Don't just brush off that rejection you received, let it ache. Let that disappointment make you cry, and then pour your heartbreak into your manuscript. Dust yourself off, and then consider what brave thing you're going to do to move forward.

Maybe it's getting in touch with another aspiring author on Twitter and asking to trade manuscripts for critique. Maybe courage is reading craft books and articles, truly considering how you need to improve. It might mean setting your precious manuscript on the operating table, slicing it open, and being honest with yourself about what's gone wrong. It might mean starting over.


There was a point in my journey that felt like my dream had died. I spent seven years researching, writing, and revising my first manuscript. It was an historical epic about ancient Armenia, and I loved it with all my heart. I still do. When I sent it out at first, there were only form rejections. I entered contests and didn't place. So I revised more. I studied the craft, reading everything I could get my hands on and attending every workshop and conference within my means. I found gut-honest critique partners and worked until my manuscript was my absolute best work. Then I entered another contest, and won first place.

When I queried it, the rejections still trickled in. Some of them were personalized, praising my characters and prose—but still no's. I exhausted my options, and my last full request came back as a rejection with the note: "I don't think I can sell this, but please send me whatever you write next."


Even though I had the seed of an exciting idea, it broke my heart to shelve that manuscript. I had to wade through the grief and sense of failure before I could face the daunting task of starting over. But I picked myself up and wrote another manuscript I loved. Seven drafts later, I believe it's 'The One'.

"A story's ending is only as significant as the struggle endured in its pursuit, and my dream of being a published author will mean so much more to me because of how hard I fought to bring it about"

If writing is your passion (and I define passion as the thing you're willing to suffer for), don't despise Act II. Learn as much as you can. Find allies. Take risks. Keep at it until you achieve your goal. One day you'll have a story worth sharing, and we'll all be rooting for you 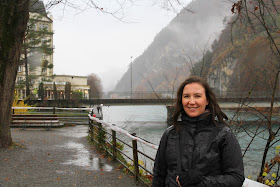 Cristin Bruggeman is a rootless adventurer whose work in the non-profit sector has taken her all over the world.

If you ever meet her in person, be sure to ask about the bus crash in the Turkana Desert or the time she accidentally got drunk with the presidential guard of the Republic of Georgia just before they were due to start their shift (there was a coup a few months later. Go figure.).

She now resides in the Belgian Ardennes where she splits her time between writing historical fantasy and having her French pronunciation corrected by small children. She is represented by Thao Le from the Sandra Dijkstra Literary Agency,