Rahul Kanakia, author of ENTER TITLE HERE, on not giving up

We're thrilled to have Rahul Kanakia here to tell us more about his debut novel ENTER TITLE HERE. 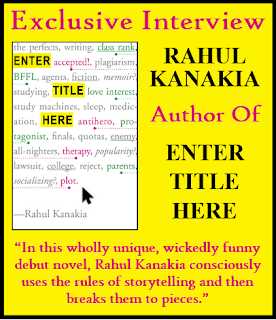 Rahul, what scene was really hard for you to write and why, and is that the one of which you are most proud? Or is there another scene you particularly love?

The relationship with Reshma's sort-of best friend (and drug dealer), Alex, was the most difficult to write. I had a very firm sense of who both of these characters were, and I knew ultimately they'd like each other, but they're both so guarded that I had no idea how to get them to the point where they really saw each other. It took three or four rounds of comments from my editor before I could pull it together. Ultimately the solution was to significantly soften Alex's character, turning her into a less-evil and much-more-principled person. Which makes sense thematically, too, since really the book doesn't need two horrendous jerks.

I really, really like The Spectacular Now. It's also about a character who's very charismatic and yet very flawed. It would've been very easy to portray the main character, Sutter Keeley, as a drunken bro-type asshole, because...that's what he is. And yet the book didn't go there. It showed that he has a good heart. And his good side isn't hidden, either. It's right out there for everybody to see. And that good will is exactly why he's been able to screw up for so long.

Another one is Susan Juby's The Truth Commission. I think this is one of the most complex and insightful novels I've read in a long time. There are two plots here. In the first the protagonist and her friend team up to ferret out peoples' secrets. In the second, she attempts to figure out what's going on with her sister, a famous graphic novelist who made a fortune by satirizing their family. Ultimately this book has a lot to say about the role and nature of the truth. But mostly it's a series of very compelling character portraits.

Don't give up. It's that simple. You would not believe how difficult it is to get published. I mean I could tell you, but you just wouldn't understand. The number of years and hours of effort you need to put in before you get anything approaching good feedback, much less an acceptance, is simply incredible. It's like nothing else I know. And the difference between people who succeed and people who don't isn't talent, it's just whether or not you give up. Most people give up. Even really good writers give up. In fact, they're more likely to give up than most, because they get the most discouraged by rejection. I’m your protagonist—Reshma Kapoor—and if you have the free time to read this book, then you’re probably nothing like me.

Reshma is a college counselor’s dream. She’s the top-ranked senior at her ultra-competitive Silicon Valley high school, with a spotless academic record and a long roster of extracurriculars. But there are plenty of perfect students in the country, and if Reshma wants to get into Stanford, and into med school after that, she needs the hook to beat them all.

What's a habitual over-achiever to do? Land herself a literary agent, of course. Which is exactly what Reshma does after agent Linda Montrose spots an article she wrote for Huffington Post. Linda wants to represent Reshma, and, with her new agent's help scoring a book deal, Reshma knows she’ll finally have the key to Stanford.

But she’s convinced no one would want to read a novel about a study machine like her. To make herself a more relatable protagonist, she must start doing all the regular American girl stuff she normally ignores. For starters, she has to make a friend, then get a boyfriend. And she's already planned the perfect ending: after struggling for three hundred pages with her own perfectionism, Reshma will learn that meaningful relationships can be more important than success.

Of course, even with a mastermind like Reshma in charge, things can’t always go as planned. And when the valedictorian spot begins to slip from her grasp, she’ll have to decide just how far she’ll go for that satisfying ending.

Rahul Kanakia’s first book, a contemporary young adult novel called Enter Title Here, is coming out from Disney-Hyperion on August 2nd, 2016. Additionally, his stories have appeared or are forthcoming in Apex, Clarkesworld, Lightspeed, The Indiana Review, and Nature. He holds an M.F.A. in Creative Writing from Johns Hopkins and a B.A. in Economics from Stanford, and he used to work in the field of international development. Originally from Washington, D.C., Rahul now lives in Berkeley. If you want to know more you can visit his blog at http://www.blotter-paper.com or follow him on Twitter at http://www.twitter.com/rahkan

Have you had a chance to read ENTER TITLE HERE yet? Have you struggled with how to convey a relationship between characters? Are you determined to not give up? Share your thoughts about the interview in the comments!