Happy Monday! We're back to a busy week, with lots of new releases to feature! Read all about them, and don't forget to enter for a giveaway of CHERRY below! 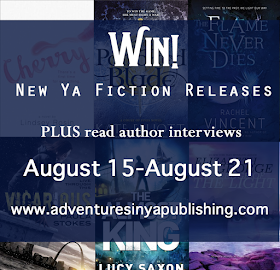 In this honest, frank, and funny debut novel, four best friends make a pact during their senior year of high school to lose their virginities—and end up finding friendship, love, and self-discovery along the way.

To be honest, the sex pact wasn’t always part of the plan.

Layla started it. She announced it super casually to the rest of the girls between bites of frozen yogurt, as if it was just simply another addition to her massive, ever-evolving To Do List. She is determined to have sex for the first time before the end of high school. Initially, the rest of the crew is scandalized, but, once they all admit to wanting to lose their v-cards too, they embark on a quest to do the deed together... separately.

Layla’s got it in the bag. Her serious boyfriend, Logan, has been asking for months.

Alex has already done it. Or so she says.

Emma doesn’t know what the fuss is all about, but sure, she’ll give it a shot.

And Zoe, well, Zoe can’t even say the o word without bursting into giggles.

Will everything go according to plan? Probably not. But at least the girls have each other every hilarious, heart-warming, cringe-inducing step of the way.

From debut author Lindsey Rosin, Cherry is a coming-of-age, laugh-out-loud tale of first times, last chances, and the enduring friendships that make it all worthwhile.

All We Have Left by Wendy Mills: Traci T. Author Question: What is your favorite thing about Poisoned Blade?

Court of Fives, the first book of the trilogy, takes place in the city of Saryenia, the city where the main character Jes was born and grew up. I loved writing about Saryenia because so much is going on there, as is true in any great cosmopolitan city of ancient or modern times. I could never get bored of writing about the Lantern District, or the Ribbon Market, or the harbors and Archives and Fives courts and busy streets. In Poisoned Blade she gets her first glimpse of palace life inside Saryenia, a place she has never before been allowed to enter. But, even as much as I loved writing that, my favorite thing about Poisoned Blade is that its story takes Jes outside of Saryenia. She sees much more of the land of Efea, which meant I got to write about different landscapes and communities and people. There’s nothing like a journey into the desert to shake things up. Author Question: What is your favorite thing about Vicarious?

My favorite thing about VICARIOUS is what the book represents to me. This is the last thing I wrote before my first work-for-hire title released, which means it's the last book I wrote before I experienced any of the business aspects of publishing--reviews, marketing, sales figures, etc. In a perfect world, authors would be able to create without those voices and figures in their heads, but for many of us trying to make a living with our work, it's impossible to divorce the creative and business sides of publishing. However, I wrote VICARIOUS for me, as a "love project." I had no idea if it would ever sell. I didn't even tell my agent I was working on it until it was completely finished. It's not a perfect book, but it's a bold and ambitious story, and I wrote it with a sense of freedom and fearlessness that I have since been trying to recapture. In the second book in this sprawling saga, Aleks is the youngest of four brothers, each with his future predictably mapped out. But Aleks wants more than a life in his father’s shop. So when he hears his parents worrying about money, he decides to save them the cost of his keep by running away.

Aleks joins the army—but when that doesn't answer his problems, he breaks the law and deserts. Wanted and alone, he heads north, where he stumbles into love, adventure, and a skyship he might be able to call home . . . if he can evade the soldiers pursuing him. Seth Darrow is a straightforward guy, and he likes life to be simple. Lately, it’s been anything but.

Since his beloved grandfather’s stroke, Seth has been focused on getting Grand home again, before his aunt can take advantage of the situation to get her hands on Grand’s valuable real estate. Seth would also like to get his relationship with Prynne on solid ground. He loves her, but can he believe she has her drug use under control?

Meanwhile, things are complicated for the other Whidbey Island friends. Derric has found Rejoice, the sister he left behind in Uganda, but no one – including Rejoice – knows she is his sister. Jenn is discovering feelings for her teammate Cynthia, feelings her born-again Christian mother would never find acceptable. And Becca, hiding under a false identity since her arrival on the island, is concealing the biggest secret of all.

In the final book of the Whidbey Island saga, events build to an astonishing climax as secrets are revealed, hearts are broken, and lives are changed forever. ONE SPARK WILL RISE. Nina Kane was born to be an exorcist. And since uncovering the horrifying truth—that the war against demons is far from over—seventeen-year-old Nina and her pregnant younger sister, Mellie, have been on the run, incinerating the remains of the demon horde as they go.

In the badlands, Nina, Mellie, and Finn, the fugitive and rogue exorcist who saved her life, find allies in a group of freedom fighters. They also face a new threat: Pandemonia, a city full of demons. But this fresh new hell is the least of Nina’s worries. The well of souls ran dry more than a century ago, drained by the demons secretly living among humans, and without a donor soul, Mellie’s child will die within hours of its birth.

Nina isn’t about to let that happen . . . even if it means she has to make the ultimate sacrifice.