Kate Elliott, author of POISONED BLADE, on listening to the main character's heart

POISONED BLADE is the second book in the Court of Fives series, and we're thrilled to have Kate Elliott here to tell us more about it. 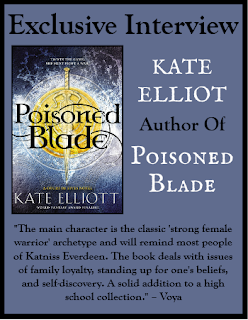 Kate, how long did you work on POISONED BLADE?

Because Poisoned Blade is the second volume of a trilogy, in some ways I have been working on it for as long as I’ve been working on the trilogy. The first draft of Court of Fives was written in Winter 2012-13, and I had started plotting it out about a year before that.

As for the actual work, I wrote a first draft in Winter 2014-15, and then did three major revision drafts through the rest of 2015. So if I were to add up the time spent JUST on Poisoned Blade I would say about ten months from writing the first line of the first draft to turning in the final final draft.

That I have to listen to the main character’s heart, even when it is something I don’t want to hear. Often the plot twists and character decisions that make me most uncomfortable are the most gripping and true.


What do you hope readers will take away from POISONED BLADE?

I hope readers will take away two things:

1. That it’s okay to assertively strive to be the best you can be. I loved writing Jes as a fierce competitor, even when it gets her into trouble.

2. That it’s important to question the story and history you have been taught because, as the old adage goes, history is written by the victors. This often means there are a lot of stories which we take as “the way it is” or “the way it was” that leave out people and events because they don’t fit the narrative. For example, when I started writing epic fantasy I was frequently told that women had never done anything in the past except be pregnant and work inside the home, and that therefore there was no place for female characters in epic fantasy adventures except as brides or as helpless women needing rescuing by men. But, as I recently wrote in a long essay at Tor.com called Writing Women Into Epic Fantasy Without Quotas, women have been doing amazing things for always. Question received wisdom. It’s not always true.

I have two pieces of advice for writers:

1. Figure out what works for you. There is no One True Handshake or Three Correct Steps. People work differently, and that’s how it should be. In my own experience I have to shift my writing process depending on the book, too; I can’t write each book exactly the same way. If someone tells you that you HAVE to work or write a certain way to be successful or good, be suspicious. That it works for them doesn’t mean it will necessary work (or not work) for you. Experiment. Figure out what works for you.

2. Be stubborn. Persistence is your best friend.

I am currently revising Court of Fives 3 (title not yet announced but it is due for publication in July 2017). I am also writing a first draft of Black Wolves 2 (Black Wolves is my most recent published novel, an epic fantasy that came out last November 2015). And I am finishing up the first draft of a novelette for an anthology. There’s more on my plate but those are the active open folders at the moment. Kate Elliott has been writing stories since she was nine years old, which has led her to believe that writing, like breathing, keeps her alive. As a child in rural Oregon, she made up stories because she longed to escape to a world of lurid adventure fiction. She now writes fantasy, steampunk, science fiction, and YA, including recent works Black Wolves, Court of Fives, and Cold Magic.

It should come as no surprise that she met her future husband in a sword fight. When he gave up police work to study archaeology, they and their three children fell into an entirely new set of adventures amid dusty Mexican ruins and mouthwatering European pastry shops. Eventually her spouse’s work forced them to move to Hawaii, where she took up outrigger canoe paddling. With the three children out of the house, they now spoil the schnauzer.

Have you had a chance to read POISONED BLADE yet? Have you figured out what works best for you as a writing process? Are you persistent and stubborn about your writing career? Share your thoughts about the interview in the comments!