Gina Damico, author of WAX, on the value of industrial-grade earmuffs

We're delighted to have Gina Damico join us to share more about her latest novel WAX. 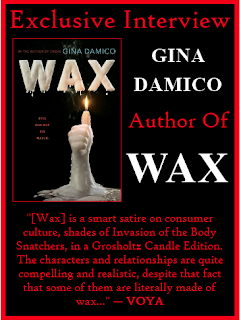 Gina, what was your inspiration for writing WAX?

A large part of WAX's story is about a wax sculpture that comes to life - a teenage boy who doesn't know what he is or where he came from or how to be a person. I've always relished the idea of writing a character like this, not only because of its comedic ramifications but because it's the opposite of what makes us human. Without a past, without a childhood, and without a sense of self, how would such a person view the world - and how would they go about carving out a place for himself and fitting in with the rest of humanity?

I prefer silence when I write - I know that's the boring answer but I am very easily distracted. Sometimes I'll put on one of those background-noise programs and listen to a babbling brook or a rainstorm, but other times I'll just slap on my trusty industrial-grade pair of earmuffs, like the ones that runway attendants wear, and block out the world. I do, however, listen to music when I go on long walks or runs, and often during those times I will brainstorm book ideas or work through particularly thorny plot elements - and usually, voila, the answer comes!

Next up is a book called WASTE OF SPACE. It's the story of a renegade cable television network who decides to throw ten teenagers into a rocket ship, shoot them into space, and film it all as a reality show. Cast members provide endless entertainment, fighting and flirting and even getting eliminated, and the nation becomes obsessed...until something goes wrong. Paraffin, Vermont, is known the world over as home to the Grosholtz Candle Factory. But behind the sunny retail space bursting with overwhelming scents and homemade fudge, seventeen-year-old Poppy Palladino discovers something dark and unsettling: a back room filled with dozens of startlingly life-like wax sculptures, crafted by one very strange old lady. Poppy hightails it home, only to be shocked when one of the figures—a teenage boy who doesn’t seem to know what he is—jumps naked and screaming out of the trunk of her car. She tries to return him to the candle factory, but before she can, a fire destroys the mysterious workshop—and the old woman is nowhere to be seen.

With the help of the wax boy, who answers to the name Dud, Poppy resolves to find out who was behind the fire. But in the course of her investigation, she discovers that things in Paraffin aren’t always as they seem, that the Grosholtz Candle Factory isn’t as pure as its reputation—and that some of the townspeople she’s known her entire life may not be as human as they once were. In fact, they’re starting to look a little . . . waxy. Can Poppy and Dud extinguish the evil that's taking hold of their town before it’s too late?

I grew up under four feet of snow in Syracuse, New York. I received a degree in theater and sociology from Boston College, where I was active with the Committee for Creative Enactments, a murder mystery improv comedy troupe that may or may not have sparked my interest in wildly improbably bloodshed. I have since worked as a tour guide, transcriptionist, theater house manager, scenic artist, movie extra, office troll, retail monkey, yarn hawker, and breadmonger.I live in Western Massachusetts with my husband, two cats, one dog, and and obscene amount of weird things purchased at yard sales.

Have you had a chance to read WAX yet? Would you like a pair of industrial-grade earmuffs? Does exercise help you work through thorny plot elements? Share your thoughts about the interview in the comments!