Gaby Triana, author of WAKE THE HOLLOW, on not worrying if what you're writing is good

We're delighted to have Gaby Triana here to talk about her latest novel WAKE THE HOLLOW. 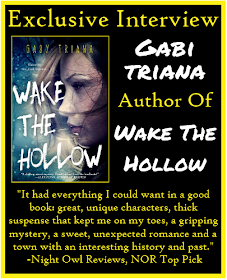 Gaby, how long did you work on WAKE THE HOLLOW?

WAKE THE HOLLOW has been my longest book-in-the-making to date. Most of my books have been written in 1-5 months then published. Wake the Hollow began in 2008 and has gone through several facelifts, including point of view from 3rd to 1st and tense from past to present. Originally, the story was about a freshman in college living on her own, but that changed to a high school teen living with a nanny and friends. So, this one took 8 years from start to publication, not working on it the entire time, of course. ☺


What do you hope readers will take away from WAKE THE HOLLOW?

One thing I’m hoping readers will take away is that ghosts don’t have to be the main source of fear in a paranormal novel. In my book, the ghosts are depicted as spirits who need help from the living in order to move on, or protective, spirit guides. Yes, it can be frightening when Micaela feels or sees them, because we all have that fear of the unknown, but ultimately, it’s real, live people who can hurt us most.

I began writing eighteen years ago and have been published for fourteen. My first novel, a middle grade called Freddie and the Biltmore Ghost, is still unpublished but is undergoing a facelift and will be called FRIDA LOPEZ, GHOSTHUNTER when it’s done. Before WAKE THE HOLLOW, 5 other novels of mine have been published, all young adult (Backstage Pass, Cubanita, The Temptress Four, Riding the Universe, and Summer of Yesterday) and 4 are still unpublished (Freddie and the Biltmore Ghost, Haunting Armando, Earth as We Know It, and Cakespell). I have 4 other books in various stages of completion, and I’ve ghostwritten 14 novels for private clients, not including the countless books I’ve enhanced for clients. That’s a lot of writing. ☺

I would say…don’t worry if what you’re writing is good or not at first. Don’t let that cripple you from putting a story down on paper. Some people want things to be perfect the first time they do it, so they never do it. They never write and forever have writer’s block. Remember you don’t have to share it yet! The beauty of writing is that you get to go back and FIX what you wrote. Then go back and fix again, and again, until it actually becomes good. ☺ Then, share it with other writers and a few readers, so you get both perspectives. Listen to them, and when you start hearing the same comments from multiple people, chances are that’s something you should fix. So my advice in short is: stop overthinking it and just write. Tragedy has brought Micaela Burgos back to her hometown of Sleepy Hollow. It’s been six years since she chose to live with her father in Miami instead of her eccentric mother. And now her mother is dead.

Sleepy Hollow may be famous for its fabled headless horseman, but the town is real. So are its prejudices and hatred, targeting Mica’s family as outsiders. But ghostly voices carry on the wind, whispering that her mother’s death was based on hate … not an accident at all. With the help of two very different guys—who pull at her heart in very different ways—Micaela must awaken the hidden secret of Sleepy Hollow…before she meets her mother’s fate.

GABY TRIANA is the award-winning author of six YA novels—Wake the Hollow (Aug. 2016, Entangled), Summer of Yesterday, Riding the Universe, The Temptress Four, Cubanita, and Backstage Pass, as well as thirteen ghostwritten novels for best-selling authors. Originally a 4th grade teacher with a Master of Science in Elementary Education and ten years teaching experience, Gaby earned Teacher of the Year in 2000, wrote her first novel, Freddie and the Biltmore Ghost, then left teaching to launch a full-time writing career. She went on to publish young adult novels with HarperCollins and Simon & Schuster, win an IRA Teen Choice Award, ALA Best Paperback Award, and Hispanic Magazine’s Good Reads of 2008. She spends her time obsessing about Halloween, Christmas, and Disney World, as well as hosting parties, designing mugs, making whimsical cakes, and winning costume contests. When she’s not writing, she might also be watching Jurassic Park movies with her boys, posting excessive food pics on social media, or helping run the Florida region of the SCBWI. Gaby lives in Miami with her three sons, Michael, Noah, and Murphy. She has one dog, Chloe, and two cats—Miss Daisy, and the reformed thug, shooting survivor, Bowie.

Have you had a chance to read WAKE THE HOLLOW yet? Does your need for perfection block you from writing? Can you stop over thinking it and just write? Share your thoughts about the interview in the comments!