One of the pleasures that comes along with attending writer's retreats and workshops is that you get to meet with amazing people I had the pleasure of meeting Erika Lewis at a retreat in Charlotte, NC a couple of years ago, and I've been dying for her book to come out (next year!!!). She's also the queen of juggling a thousand different things. So many of us struggle to balance family and work and writing, so when she went off on a recent trip to research the second book and took her kids, family with her, I asked her to give us some survival tips. Here's she is with some great suggestions!


The Road to Research


Let’s face it. It’s never easy mixing business with pleasure. Even through for many of us doing research for our books is just that. But when you bring the family along, it becomes something else entirely; two competing agendas that must be melded together, and shredded apart throughout the journey.

As I started to outline book two of my GAME OF SHADOWS series for Tor, I realized that a trip to Scotland and Ireland was what I needed. My husband had never been, and neither had the kids (ages 10 and 12,) so we decided to make it a 2-week adventure.

Mix a good bit of work with a little bit of pleasure. I tried to make both weeks start off with fun and end with a bit of trudging around looking at ruins, listening to historians, and scanning mythology books for what I needed for work.

The kids were tasked with taking pictures. They seemed excited about it and we made sure they had their own cameras.

As they say, the best laid plans…yeah, we had to make modifications along the way, but hey, everyone needs a place to start, and for us, that was in Scotland.


It started with three days in Edinburgh, much of the time spent adjusting to the time zone and dealing with a lot of jet lag.

TIP 1: Allow a couple of days to get used to the time zone and get over the long flight. Take naps, eat late, and keep touring to a minimum.

TIP 2: CONSIDER RENTING AN APARTMENT. We rented a two-bedroom apartment on Prince Street. The views from every window, Edinburgh Castle! 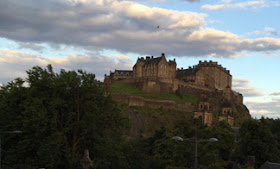 It was much less expensive than two rooms at a hotel for 3 days, and it had a kitchen. My kids get sick of eating at restaurants, so having a kitchen was a lifesaver! Also, many apartments, like ours, have washing machines! Now washing machines in Europe are generally washer-dryer machines. And the take FOREVER to dry clothes, but beggars can’t be choosy!

TIP 3: MIX IN A CHALLENGE WITH THE TOURING. We hiked Arthur’s Seat, which was definitely the highlight of the city for the family. Making it to the top was exhausting and a big accomplishment; one we’ll always remember. One note—put your hair up. It’s very windy at the top.

4-Day Excursion to the Isle of Skye, through the highlands: This was a big part of my research. I needed to see something specific on the Isle (no spoilers here ☺.) Our tour guide was an expert on the landscape, the ruins we went to and on the mystical lore of Scotland. Here’s just on of the hundreds of places we stopped and explored Eilean Donan Castle.) Howling wind, sideway rain, and haunted hallways all made this a truly Scottish experience! 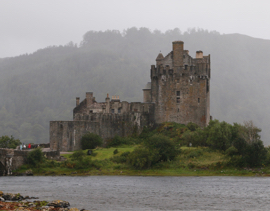 I peppered her with a ton of questions and asked her to take us to specific sites (again no spoilers,) and, even though the group had 10 on the small bus, she was more than accommodating. The tour company, Viator,  was well organized. They picked an easy meeting spot for the start of the journey. They took care of the reservations on where to stay at the various overnight stops, picking the perfect B&B’s for our family. I highly recommend it.

TIP 4: REMIND THE FAMILY THAT THIS IS THE HARDEST PART OF THE TRIP EVERY FEW MINUTES! This was tough for them. My husband’s back ached from getting on and off the wee bus. We moved from Fort William to the Isle of Skye, which meant three different beds in 5 days. Kids were troopers. The Bed & Breakfasts were the Holy Grail. Our caretakers were warm and friendly, and really made us feel at home. To start off the day’s adventures, there was a family table for breakfast filled with farm fresh eggs, salty European-style bacon, toast and fruit.

TIP 5: TAKE A LITTLE TIME FOR YOURSELF. Trade off with your spouse and go do something on your own. My alone time was spent getting up early and going for a run. I did this a few times. On the Isle of Skye, I ran over the bridges that connect the Isle to Scotland. It was one of the most incredible runs of my life. 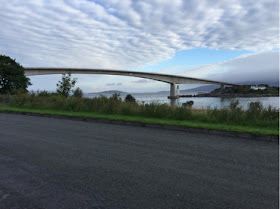 The pristine island has been touched in over 3,000 years. It’s magical, mystical, enchanting. 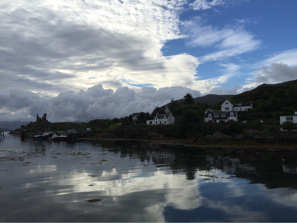 For my husband, this meant finding a new pub every night to talk to locals. He always finds friends wherever he goes, one of the things I love about him.


Kilkenny, Ireland was the perfect spot for us to go for a little R&R. It’s a very kid friendly town. The Newpark Hotel where we stayed was reasonable and had so much for the kids to do. This was the time for us to relax, not do a lot of research for me, but let them have fun. The town itself is medieval, literally, and had 12th century buildings filled with candy stores, toy stores, trinket stores, and even a GameStop, making my son happy.

TIP 6: HOTEL CHILDCARE SERVICES ARE GOOD FOR PARENTS AND KIDS. By this time we were all so sick of each other, we needed a break. The kids went to the camp at the hotel for two of the days and hung out with other kids, and we had some adult time, driving around Ireland, still doing a little research for me but enjoying the scenery and each other, without worrying about the kids’ needs.

TIP 7: PERHAPS LEAVING THE FAMILY WHILE YOU WORK ISN’T A BAD THING. By the time we got to Dublin, our last stop in terms of moving, they were done with seeing ancient sights. But I wasn’t. I had a 2-day tour booked with a local expert to see some of the most important places. The kids opted to do things with Dad in Dublin. It was great for me. I could spend all my time focusing on work, seeing everything I needed too, and not being interrupted during lengthy conversations on history and mythology. 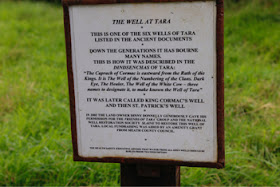 For them, it meant relaxation. We had an apartment in Dublin, and again they loved not having to go out for every meal. We could do much needed laundry as well. We found a place for the kids to swim, which was the gym across the street from the apartment, and they had a great time doing that, as well as shopping.

TIP 8: KNOW WHEN TO SAY WHEN. After 2 weeks, my husband and I still had places we wanted to go, and things we wanted to do, but it was time to go home. The kids had school starting in a week. We missed our house and dog, and beds. So my husband downed his last Guinness. I, a “wee” bit of Scottish whiskey, and the kids, a final bar of Dairy Milk Chocolate, and then boarded the 11-hour flight home.

THE MORAL OF THE STORY:

Where there’s a will, there’s a way. This was a journey of discovery for us as a family. We’d never traveled to so many places and for such a long time before. The kids, being a bit older now, learned valuable life-lessons, like navigating foreign cities, understanding the value of your currency in a different country, and even how to survive with dirty laundry as long as you have clean underwear and socks. For me, it was a magical time, both finding all the places for the book series, and hearing the mythology behind them from the experts, but also having my family with me to see many of them. I’ll leave this blog post with one final image. A 3,000 year-old stone circle we found on a sheep farm between Cork and Killarny. 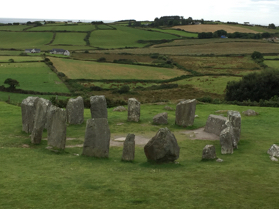 ERIKA LEWIS graduated from Vanderbilt University and went on to earn an Advanced Certificate in Creative Writing from Stony Brook University. She has had a successful career in television production for the past seventeen years, working with Sony (V.I.P, Strong Medicine,) with Fireworks Television (La Femme Nikita, Andromeda, Mutant X, Strange Days at Blake Holsey High) with Fox (On Air with Ryan Seacrest, Ambush Makeover) and with G4 (Attack of the Show, X-Play). Lewis is the author of The 49TH Key, currently running in Heavy Metal Magazine, and Firebrand with Legendary Comics. Game of Shadows is her debut novel. 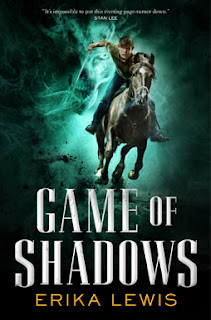 About Game of Shadows:

A young man plagued by the ability to see ghosts races to save the mythological land of Tara from a terrible fate in Erika Lewis's stunning debut, Game of Shadows.

Thousands of years ago in Ireland, an ancient race fought a world-changing battle―and lost. Their land overrun, the Celtic gods and goddesses fled, while the mythical races and magical druids sailed to an uncharted continent, cloaked so mankind could never find it. This new homeland was named Tara.

In modern day Los Angeles, Ethan Makkai struggles with an overprotective mother who never lets him out of her sight, and a terrifying secret: he can see ghosts. Desperate for a taste of freedom, he leaves his apartment by himself for the first time―only to find his life changed forever. After being attacked by dive-bombing birds, he races home to find the place trashed and his mother gone.


With the help of a captain from Tara who has been secretly watching the Makkais for a long time, Ethan sets out to save his mother; a journey that leads him to the hidden lands, and straight into the arms of a vicious sorcerer who will stop at nothing until he controls Tara. With new-found allies including Christian, the cousin he never knew he had, and Lily, the sword-slinging healer who’d rather fight than mend bones, Ethan travels an arduous road―dodging imprisonment, battling beasts he thought only existed in nightmares, and accepting help from the beings he’s always sought to avoid: ghosts. This L.A. teen must garner strength from his gift and embrace his destiny if he’s going to save his mother, the fearless girl he’s fallen for, and all the people of Tara.

To buy the book: