Colleen Houck, author of RECREATED, on your writing being your legacy

RECREATED is the second book in the Reawakened series, and we're excited to have Colleen Houck stop by to chat about it. 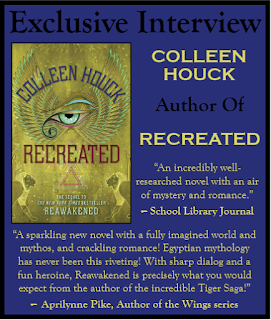 Colleen, what was your inspiration for writing RECREATED?

I've always known that the REAWAKENED series would be three books and in fact, the number three is very important. There are three princes, three pyramids, three villains, three obstacles to the Afterlife, etc. I love working with symbols and so I used that a bit as my inspiration. Each book is also loosely based on a few of the parts of an Egyptian soul. REAWAKENED is the eye book. RECREATED is the heart so you'll read a lot about hearts and my villainess devours hearts.

I think the hardest part to write was the origin story of mankind and how the Egyptian gods came into being. Egyptian mythology is very challenging and trying to weave all the various stories together into one whole was difficult to say the least. At the end of it, though, I came away with something I'm very proud of. My hope is that someone studying Egyptian mythology will read about a character or an event and make the link.

I'm a huge fan of the Grisha series by Leigh Bardugo. The Russian lore mixed with fantasy would be an easy transition for my readers. Other YA authors that write mythology include Bree Despain, Brodi Ashton, Keirsten White, and Tera Lynn Childs.

How long did you work on RECREATED?

From start to finish, I would say about 6 months. That's my average time to write a book.

RECREATED taught me that my talents lie in weaving together seemingly impossible things. In this book I took the idea of an Afterlife and the Netherworld and overlayed some Western mythological concepts to make the story more seamless. I look for similarities in cultures and build them on one another to create something new.

What do you hope readers will take away from RECREATED?

I hope they gain an interest in Egyptian mythology. The time spent studying the various books I've collected has been well worth it. I've always been fascinated with it but now I feel like I could hold my own when having a conversation about the different gods and goddesses.

So far, I've published all the books I've written. Being an author is a career change for me. I studied American Sign Language and was an ASL interpreter working full time when I wrote my first three books. I started writing in 2008 after reading the Twilight books and discovering the author was my age. For some reason I never considered writing a career choice though I loved creative writing classes I took in school.

I think the AHA! moment was just finding other women like myself who had done it later in their lives. I am inspired by J. K. Rowling's story. I love how she just had an idea for a kid who was a magician and didn't know it and gave writing a try. Her efforts paid off in a big way but, more importantly, she was an inspiration to others.

I work at home. Usually I write four days a week and save one day for appointments and grocery shopping. I can't listen to music when I write. My preference is to have my dogs nearby. There's just something about a snoring dog at my feet that makes me feel comfortable.

Don't give up. If you love writing, go for it. It can never be a bad thing. My grandfather wrote cowboy books that he never published but I can hear his voice when I read them. Your writing is your legacy. Even if the only one who reads it is you, it is so valuable.

Right now I'm working on edits for book three in the Recreated series and then I'll turn my attention back to my tigers and finish the last tiger book called TIGER'S DREAM. 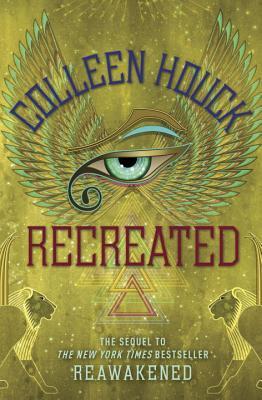 From Colleen Houck, New York Times bestselling author of The Tiger’s Curse, comes Recreated, the second book in the epic Egyptian-inspired Reawakened series, in which a seventeen-year-old must literally go to hell to save the love of her life.

Lily Young thought traveling across the globe with a reawakened sun prince was a grand adventure. Now she’s about to embark on the journey of a lifetime.

When Amon and Lily part tragically, he transports himself to the Netherworld—what mortals call hell. Tormented by the loss of his one true love, he’d rather suffer in agony during Lily’s mortal years than fulfill his duty to protect humanity.

Heartbroken, Lily seeks refuge on her grandmother’s farm. Yet she can feel Amon’s pain, and she has been having dreams—dreams of Amon continually suffering.

For before he departed, Amon gave Lily something very special, an item that connects them even though they are worlds apart. Now Lily must use this object to free him, and to free their realms from darkness and utter chaos. She will do whatever it takes. New York Times Bestselling Author Colleen Houck is a lifelong reader whose literary interests include action, adventure, science fiction, and romance. Formerly a student at the University of Arizona, she worked as a nationally certified American Sign Language interpreter for seventeen years before switching careers to become an author. Colleen lives in Salem, Oregon, with her husband and a huge assortment of plush tigers.

Have you had a chance to read RECREATED yet? Have you used ancient mythology to inspire your writing? Do you think of writing as being your legacy? Share your thoughts about the interview in the comments!