Brent Hartinger, author of THREE TRUTHS AND A LIE, on the 'no' to 'yes' ratio

We're thrilled to have Brent Hartinger stop by to share more about his latest novel THREE TRUTHS AND A LIE. 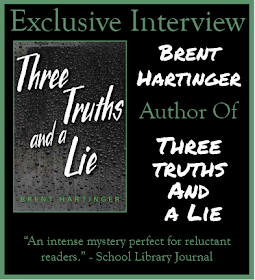 Brent, what was your inspiration for writing THREE TRUTHS AND A LIE?

It was as simple as my visiting a remote cabin in a rain forest on the Olympic Peninsula near Seattle and thinking, "Oh, my God, this would make a fantastic setting for a book!"

Everyone knows what a tropical rain forest is, but these are temperate rain forests, which means they're cold and dark and misty. They're also incredibly lush, with ancient trees, and hanging moss. It's like everything is growing, but nothing has changed in millions of years. Talk about a forest primeval!

But as one of the characters keeps saying, "Nothing is exactly what it seems in this place." This is very much a psychological thriller.

I'm not one of those authors who says that a location is a "character." It's a location, not a character! Give me a break. But I'll grant you that the location here is very specific and very important, and very much a reflection of the characters' feelings.

Then again, that's what I think the location should be in almost every novel.

As an author, I know I'm known for more lighthearted books, books with a lot of humor. And as a person, I think I'm sort of a genial, not particularly provocative guy.

And then out comes this book that's a dark, edgy, sexy horror/thriller novel. I loved surprising myself. I didn't know I had something like this in me!

It's weird having a "brand" as an author. I think it's easier for some authors, because they genuinely gravitate toward one particular thing. The rest of us get put in a particular category because we have some kind of success in it. Which is absolutely fine. As a reader, I like an author with a clear brand.

But as an author, I think it's important to change and grow. If you've already done something, there's no point in doing it again and again.

I genuinely hope my readers are surprised too -- pleasantly!

I do think this book is something truly different, both for my own career and YA books in general. I hate to toot my own horn, but I also think it might be something new for a LGBT YA book, partly for reasons that I can't talk about without giving away the ending.

Well, there's a bit of steamy sex in the book, and I confess I'm proud of those scenes.

I've always said before that I'm a "fade to black" kind of writer when it comes to sex. But this story seemed to call for a different approach.

The book is not a romance, and it's not "realistic" fiction. By that, I mean the sex is not "issue sex" — I'm not making a greater point about some aspect of teen sexuality, except maybe that teens are sexual beings. I'm also not necessarily trying to "empower" teens.

No, I'm using sex to explore darker themes, like domination, jealousy, and secret desires, even the connection between sex and death. These themes are right in line with the genre I'm writing in, but they didn't seem like things that I usually read in YA, at least when it comes to sex. For that reason, it seemed like an interesting place for me to go.

Another part of me is sort of pinching myself, because the sex here is gay. And yet the book was written for and is being marketed to a mainstream audience.

Fortunately, the YA readership is so open to new voices and ideas. Teenagers today are so much more sophisticated than when I was that age. Anyway, this is how things change: what was shocking or controversial twenty years ago is often accepted as a non-issue today.

Aspiring writers? Well, be prepared for the fact that you’ll hear “no” a lot more than you’ll hear “yes” (the ratio is approximately one thousand “nos” for every one “yes”!).

The stories you hear about overnight sensations are exceptions to the rule, and even then, that kind of success doesn't always last. Most writers struggle in obscurity for years, with little or no acclaim or financial reward. Some eventually break out, but the vast majority do not. I think it’s interesting that I have a lot of very bitter writer-friends, but that none of my doctor or lawyer friends are bitter!

If you choose to devote your life to writing, accept the possibility that you might never make a great living from it, even if you’re talented. It’s a big, cold world out there, and no one “owes” you anything, especially a career as an artist.

That said, if you must write, then write. But first, learn the craft. Learn your genre inside and out. Also, learn the industry (and learn how to be a business, which is what you are, even as an artist). Be smart and adaptable. If something doesn’t sell, move on; you can always come back to it later, and you’ll have a much better perspective. A weekend retreat in the woods and an innocent game of three truths and a lie goes horribly wrong in this high-octane psychological thriller filled with romantic suspense by a Lambda Award–winning author.

Deep in the forest, four friends gather for a weekend of fun.

Truth #1: Rob is thrilled about the weekend trip. It’s the perfect time for him to break out of his shell…to be the person he really, really wants to be.

Truth #2: Liam, Rob’s boyfriend, is nothing short of perfect. He’s everything Rob could have wanted. They’re perfect together. Perfect.

Truth #3: Maia has been Liam’s best friend for years…long before Rob came along. They get each other in a way Rob could never, will never, understand.

Truth #4: Galen, Maia’s boyfriend, is sweet, handsome, and incredibly charming. He’s the definition of a Golden Boy…even with the secrets up his sleeves.

One of these truths is a lie…and not everyone will live to find out which one it is.

Click here for the trailer for THREE TRUTHS AND A LIE.

Also a playwright, Mr. Hartinger has seen his work produced at theaters across the country, including Off-Off Broadway at Wings Theatre in New York. His play version of his novel GEOGRAPHY CLUB premiered at Seattle's FringeACT Festival of New Plays in 2004.

As a screenwriter, Mr. Hartinger has won many awards, including the $5000 Fort Lauderdale Film Festival Screenwriting in the Sun Award. He has several scripts under option and in the process of studio or network development.

Mr. Hartinger lives south of Seattle with another novelist, Michael Jensen, his partner since 1992. He has counseled dozens of teenagers, both as co-facilitator of Oasis, a 200-member gay teen support organization he helped found, and as a counselor at a group home for troubled young people.

He is currently spearheading The Real Story, an online and print safer sex campaign aimed at gay male teens and twentysomethings, which involves characters from GEOGRAPHY CLUB and other popular teen novels; the project will debut in 2005.

Mr. Hartinger speaks frequently on the subjects of writing, social tolerance, and personal motivation, at schools, bookstores, conferences, churches, and civic groups; he appeared at 60 such events last year.

Have you had a chance to read THREE TRUTHS AND A LIE yet? Has a setting every inspired you to write a story? Have you learned how to be a business? Share your thoughts about the interview in the comments!