Shannon Lee Alexander, author of LIFE AFTER JULIET, on giving a stagnating story a heart

We're thrilled to have Shannon Lee Alexander join us to share more about her latest novel LIFE AFTER JULIET.

Shannon, how long or hard was your road to publication? How many books did you write before this one, and how many never got published? 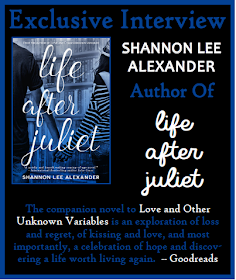 My debut novel, LOVE AND OTHER UNKNOWN VARIABLES took six years to get from conception to booksellers’ shelves. It was a long and windy trail that led me to publish the book, and it all began in a hospital where I watched my childhood friend tackle ovarian cancer like a boss. She was the bravest person I’ve ever called friend. Always hopeful, confident, caring, and ready with a joke, she made me want to be MORE. I’ve been writing for as long as I can remember, but I’d never finished anything. I’d start stories and get about a third of the way through, and then panic because I didn’t know what to write next. Instead of sticking with it, I’d let my self-doubt and fear win. I’d give up.

There’s something about watching your friend refuse to give up, even as Hospice is wheeling a hospital bed into her childhood room (the same room in which we invented crazy, exclusive clubs that out little sisters couldn’t join without undergoing extreme physical and mental challenges), that makes a person realize she’s being dumb. It was ridiculous to let my fear of failing, my fear of writing a bad story (something I now know is just part of the writing process), keep me from achieving a lifelong dream.

So I started writing a story. And I kept writing. And when I’d get to a tricky spot, well, I’d keep on writing. Eventually, I typed “The End.”

I had succeeded. I tried not to dwell on the fact that I’d succeeded at writing the world’s worst story. I tried to remember that the goal hadn’t been to write a best seller. It’d been to finish a novel-length story.

I wrote a novella-length story next, and it was a little less terrible than that first story. And finally, I began working on LOVE AND OTHER UNKNOWN VARIABLES. I’d love to say that once I’d conquered my fears they never came back, but I can’t. Now I know that it’s okay to be scared. Along the way, I came to realize that what made my friend Em brave wasn’t fearlessness. She was brave because despite being scared, she chose to carry on. She chose to tell jokes and love fiercely and hope.

LIFE AFTER JULIET is a companion to my debut novel LOVE AND OTHER UNKNOWN VARIABLES. While writing LAOUV, I was pounding away at the keyboard for years all by myself. Eventually, I joined the YA Cannibals, the best-ever critique group, but the characters and the heart of the story were developed just for me. I wrote the book that I wanted to read. That’s pretty common writing advice, actually. Toni Morrison said, “If there is a book that you want to read, but it hasn't been written yet, you must be the one to write it.”

But with LIFE AFTER JULIET, I felt like I had to write a book that my readers would want to read. And while I l-o-v-e my readers, the process of writing LAJ felt so much more difficult than writing LAOUV because I was constantly second guessing myself. It became less about passion and storytelling and more about checking off boxes that I thought readers wanted to see completed. The story had no heart.

Eventually, I realized I wasn’t doing the story or myself justice. I threw out first draft of LAJ and began again. I wrote for myself, and, suddenly, everything started flowing. I gave a stagnating story a heart and it came to life. I learned heart is what I love about stories. It’s why I read them. It should always be why I write them, too.

What do you hope readers will take away from LIFE AFTER JULIET?

I hope that readers who have lost a loved one in their own lives will take away a sense of hope. Grief doesn’t have to rob our lives of beauty, love, and magic. It shapes us—changes who we are.

Grief becomes a vital part of a person. Telling someone to “get over it” or “move on” is like telling a person to rip out her small intestines and then “move on.” That’s not a thing a person can do. Unless he’s a zombie.

Grief we carry with us. And in the end, that makes us stronger. We carry all those beautiful memories of our lost ones, wrapped up tightly in our hopes and dreams—always. Becca Hanson is a reader--a "voracious" reader. And with all those fictional friends, she never had time for real ones. Plus real ones come with uncontrollable quirks, like constantly filling a room with song, drawing on any available surface, and worst of all, dying. Real friends are more trouble than they're worth. Since her best-and only-real friend Charlotte's death six months before, Becca has returned to a life of books in order to distance herself from heartache and constant loneliness as her junior year at Sandstone High begins.

When a class project forces her into the Drama Club, she attracts the attention of not one, but TWO guys involved in the production, onstage and off. Meanwhile, she's still dealing with the grief of Charlotte's death--the fact that Charlie is away at MIT--and that she finally has to build a life for herself on her own terms. Ultimately she learns more about who she is, what she wants, how she feels--and how to find what she's looking for. And while she isn't sure what comes next, she's pretty sure there'll be more kissing involved.

Shannon Lee Alexander is a wife and mother (of two kids and one yellow terrier named Harriet Potter). She is passionate about coffee, books, and cancer research. Math makes her break out in a sweat. Love and Other Unknown Variables is her debut novel. She currently lives in Indianapolis with her family.

Have you had a chance to read LIFE AFTER JULIET yet? Are you able to keep writing even when you get to tricky parts? Is heart the thing you love about reading and writing stories? Share your thoughts about the interview in the comments!