Katie Kennedy, author of LEARNING TO SWEAR IN AMERICA, on planning and researching plot points

We're thrilled to have Katie Kennedy stop by to share more about her debut novel LEARNING TO SWEAR IN AMERICA. 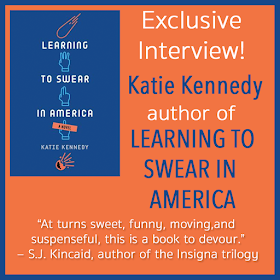 Katie, how long or hard was your road to publication? How many books did you write before this one, and how many never got published?

LTSIA is my sixth book. I wrote two adult thrillers, and then got an agent for a MG. I wrote its sequel while we revised that book, but my agent left the business before we went on submission. So then I wrote an oh-crap-I-need-an-agent-book. (That one I burned at midnight in an undisclosed location—then posted guards over its charred remains.) After that I wrote LTSIA—so it’s the sixth book I wrote, but the first to be published. I still love the MG, though, and hope to see it in print someday.


What was your inspiration for writing LEARNING TO SWEAR IN AMERICA?

I walked out of an evening Western Civ class after teaching the Enlightenment, and thought about Immanuel Kant. Kant said, “Do what is right though the world should perish.” I was looking up at the stars over the pine trees—we have spectacular stars—and thought, “But what if the world really would perish? What then, Mr. Kant?”

Heh heh. Yeah…so I was halfway through the draft, and intended to make things worse at the halfway point by having the asteroid speed up, so they suddenly have less time to deal with it. You hear about things slingshotting around planets and I thought it would be fine—but hadn’t actually done the research for that particular point. Which was only, you know, the turning point of the whole story.

So then I did the research and discovered it wasn’t possible—that apparently what I wanted to do would violate the laws of nature. Stoopid laws of nature.

I had to scramble—and that meant reading a few hundred pages of astrophysics on an emergency basis. But I found my answer one day in some itty bitty print. I got my turning point—and also learned that a person really should have their major plot points not only planned, but researched before they start. Someday I’ll even take my advice.

I have another book coming out with Bloomsbury, in 2017. WHAT GOES UP is also a contemporary/sci fi mashup, with maybe a bit more sci fi than LEARNING TO SWEAR IN AMERICA—but a similar tone. Brimming with humor and one-of-a-kind characters, this end-of-the world novel will grab hold of Andrew Smith and Rainbow Rowell fans.

An asteroid is hurtling toward Earth. A big, bad one. Yuri, a physicist prodigy from Russia, has been called to NASA as they calculate a plan to avoid disaster. He knows how to stop the asteroid: his research in antimatter will probably win him a Nobel prize--if there's ever another Nobel prize awarded. But Yuri's 17, and having a hard time making older, stodgy physicists listen to him. Then he meets Dovie, who lives like a normal teenager, oblivious to the impending doom. Being with her, on the adventures she plans when he's not at NASA, Yuri catches a glimpse of what it means to save the world and save a life worth living.

Prepare to laugh, cry, cringe, and have your mind burst open with questions of the universe.

Katie Kennedy is a college history instructor. She used to teach in a fire station. When the alarm rang, the entire class jumped up and ran out of the room. She became an LPN in order to write more accurate medical scenes. She has been lost in Moscow, and rousted by the KGB for sitting in Red Square to eat her ice cream. She has been bitten by a fish.

Katie lives in Michigan's Upper Peninsula with her husband, daughter, and son, in a town with a million bats. LEARNING TO SWEAR IN AMERICA comes out July 5, 2016, from Bloomsbury.

Have you had a chance to read LEARNING TO SWEAR IN AMERICA yet? Have you ever written a book you wanted to burn and then post guards over the charred remains? Do you do research to help with the science of plot points? Share your thoughts about the interview in the comments!