Beth Revis, author of A WORLD WITHOUT YOU, on pushing yourself to make it personal

We're thrilled to have Beth Revis join us to share more about her latest novel A WORLD WITHOUT YOU. 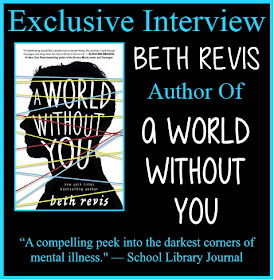 Beth, what was your inspiration for writing A WORLD WITHOUT YOU?
The story originally started as a time travel story--it was all about a boy trying to save his girlfriend stuck in the past. And the original idea was to tell the story through a mix of narrative and found documents, journals, transcripts, etc. But through time, the story evolved into a story about a time travel adventure to a twisted story about mental health, familial relationships, love, and more. But the original seed was always time travel.


The hardest scene for me to write was actually not a single scene, but all the chapters from the sister Phoebe's point of view. In my original draft, she didn't have a narrative voice. That was something that evolved as the story developed, and it was extraordinarily difficult to write in her point of view because it was so personal to me. I'm not Phoebe, but a lot of her experiences are mine. There are some parallels between us, and those moments where what she is going through and saying is the same as what I went through and said...that was the hardest to write. But also the truest, and I'm glad that I was able go there in my writing.

How long did you work on A WORLD WITHOUT YOU?

I wrote a very scant first draft in about a month. As I was wrapping up that draft, I found out I was pregnant. The entire development of the book became this race between getting the book done before giving birth. I finished the heaviest edits literally days before my baby was born--I finished on Friday and the baby came Monday. Then I did the rest of my edits between when he was two and six months old. So: making a book takes slightly longer than making a baby, but at least it required less physical pain!

I used to say I'd never write a contemporary novel. I love reading them, but just didn't think I had a story to tell. So just accepting that the book was a contemporary and that I could write it was a huge lesson for me, a prejudice against myself that I had to overcome.

I also learned that my writing isn't good until I push myself to make it personal. The original draft of anything I write is only the surface. It's not until later, when I push at my psyche and draw out the truth in the story that it becomes worthwhile. I have to relearn this lesson with every book I write, and it's excruciating every time. Seventeen-year-old Bo has always had delusions that he can travel through time. When he was ten, Bo claimed to have witnessed the Titanic hit an iceberg, and at fifteen, he found himself on a Civil War battlefield, horrified by the bodies surrounding him. So when his concerned parents send him to a school for troubled youth, Bo assumes he knows the truth: that he’s actually attending Berkshire Academy, a school for kids who, like Bo, have "superpowers."

At Berkshire, Bo falls in love with Sofia, a quiet girl with a tragic past and the superpower of invisibility. Sofia helps Bo open up in a way he never has before. In turn, Bo provides comfort to Sofia, who lost her mother and two sisters at a very young age.

But even the strength of their love isn’t enough to help Sofia escape her deep depression. After she commits suicide, Bo is convinced that she's not actually dead. He believes that she's stuck somewhere in time — that he somehow left her in the past, and now it's his job to save her.

Beth Revis is a NY Times bestselling author with books available in more than 20 languages. Her latest title, A World Without You, is a semi-autobiographical story blending the supernatural with mental illness. Beth is also the author of the Across the Universe series, The Body Electric, numerous short stories, and the nonfiction Paper Hearts series, which aids aspiring writers. A native of North Carolina, Beth is currently working on a new novel for teens. She lives in rural NC with her boys: one husband, one son, and two massive dogs.

Have you had a chance to read A WORLD WITHOUT YOU yet? Have you had a story evolve from one genre to another? Is it difficult for you to draw out the truth in a story? Share your thoughts about the interview in the comments!