We're excited to have Amanda K. Morgan join us to chat about her novel SECRETS, LIES, AND SCANDALS. 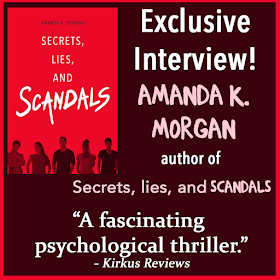 Amanda, what was your inspiration for writing SECRETS, LIES, AND SCANDALS?

I remember sitting in Mrs. Lanka's class in sixth grade, reading Lois Duncan novels, and talking about them with my friends. I think of SLS as a kind of Lois Duncan throwback.

How long did you work on SECRETS, LIES, AND SCANDALS?

Actually, I wrote this book really quickly...in about two months! I generally spend more time writing outlines than I do writing the actual book. I outline almost every scene before I actually start working on the novel, and then I spend time REVISING the outline and moving my scenes around, and then finally I dive in. I always have scenes that pop in and surprise me while I am working on the book, but generally my work is very planned. If you asked me when I started outlining, well, that would add a significant amount of time to my writing. :)

My writing ritual changes often! I recently moved to a place with a balcony, so if the weather is nice I sit outside. I don't really like music when I write, but I do like the TV on.

My book three with Simon Pulse, which is SUCH A GOOD GIRL. It's a thriller about one of those straight-A, perfect girls who seems to have everything together...until she gets a little too close to her French teacher and things start to unravel. I just got to see the cover, and I'm absolutely thrilled with it! It's gorgeous and I am so excited to share it! It'll be out in 2017!

In the tradition of I Know What You Did Last Summer and How to Get Away with Murder, five teens must overcome their paranoia in order to keep their teacher’s death a secret in this fast-paced suspense thriller.

Nothing ruins summer vacation like a secret…especially when it involves a dead teacher.

Ivy used to be on top of the social ladder, until her ex made that all go away. She has a chance to be Queen Bee again, but only if the rest of the group can keep quiet.

Tyler has always been a bad boy, but lately he’s been running low on second chances. There’s no way he’s going to lose everything because someone couldn’t keep their mouth shut.

Kinley wouldn’t describe herself as perfect, though everyone else would. But perfection comes at a price, and there is nothing she wouldn’t do to keep her perfect record—one that doesn’t include murder charges.

Cade couldn’t care less about the body, or about the pact to keep the secret. The only way to be innocent is for someone else to be found guilty. Now he just has to decide who that someone will be.

With the police hot on the case, they don’t have much time to figure out how to trust each other. But in order to take the lead, you have to be first in line … and that’s the quickest way to get stabbed in the back. 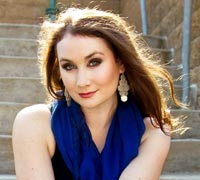 Amanda K. Morgan is a freelance writer living in Nashville, TN. She covers events and works as a technical writer when she isn't working on her YA novels.

Amanda is an avid volleyball player and spends time playing both indoors and out. When Amanda isn't writing, she enjoys being entirely too busy and trying new things. Endeavors as of late include appearances in music videos, TV, and movies, rock climbing, and attending as many concerts and shows as her schedule allows.

--
Have you had a chance to read SECRETS, LIES, AND SCANDALS yet? Do you spend more time outlining than writing? If you outline, do you still have scenes pop in and surprise you? Share your thoughts about the interview in the comments!