If you're a writer, like me, carefully treading the water in various social media platforms, then you'll appreciate our guest today. Jennifer Bardsley knows a thing or two about writers and social media as her 20,000 followers on Facebook, 4300 on Twitter, and 14,500 on Instagram will attest. She is also the creator of the popular Facebook page, The YA Gal, as well as a debut author—her first book, GENESIS GIRL, comes out June 14, 2016!


“Instagram is not Twitter,” that sounds rather obvious, doesn’t it? After all, one is based on pictures, and the other based on pithy witticism. How hard can it be? Set up an account, post some stuff, and boom, you’re Internet famous!

Unfortunately, social media is a lot more complicated than that. Over the past year and a half, I’ve noticed authors with strong Twitter skills flounder on Instagram because Twitter and Instagram are not the same. But with a few easy tweaks, they could be more successful. 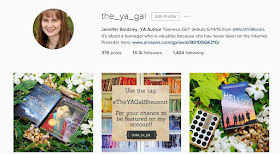 Tip #1: Hearts are different than favorites

On Twitter favoriting a tweet is a nice, friendly thing to do—in moderation. If one of your Twitter followers favorited everything you tweeted, that would be creepy. Stalker alert! But on Instagram, it’s the opposite.

A good Instagram follower is someone who hearts all, or nearly all, of your posts. This isn’t weird, it’s good manners. The more hearts your posts get, the better their chances are of landing in the top posts section of each particular hashtag. When a new person follows you for the first time, you might notice that they go back in your post history and heart everything. This is called “spam” and when it comes to hearts, spam is considered a friendly gesture.

Tip #2: Regrams are different than retweets

On Twitter retweeting a tweet is a compliment. You don’t ask permission first, you just do it. When you see an account retweet ten tweets in one day, that isn’t a big deal. But on Instagram, regraming or reposting, is entirely different. Some people get offended if you regram their picture, especially if you don’t seek their prior approval.

How do you regram a picture in the first place? Popular apps like “Repost” help you do this. Usually these apps automatically link back to the original account so the photographer gets credit.

Regraming your friend’s picture is probably okay (and perhaps encouraged), but you should never copy a photograph from a stranger’s account unless you ask them first, or they encourage you do to so by sponsoring a giveaway.

Remember how important hearts are on Instagram? People that follow you but never give your photos hearts or comments are called “ghost followers.” It’s fine to have a bunch of ghosts following you, but it’s poor form to ghost follow someone who is following you back. This negatively hurts your friend’s engagement rate.

How do accounts know if you are a ghost follower? There are apps like Crowdfire and InstaFollow that provide this data. Many Instagram users regularly unfollow their ghosts. You might have noticed people posting warnings like “Heads up! I’m unfollowing ghosts today.” Heart or comment to prove you’re alive and that you are a well-mannered member of the Bookstram community.

Tip #4: Too many pictures, too fast, makes you look clueless

On Twitter you can tweet as fast as your thumbs can type and everyone will love you. On Instagram, if you flood your feed with photos you’ll look like a spammer. Not a heart-spammer, which is good, but a fake-account-from-India-spammer. Apps like InstaFollow will actually identify you as a spammer.

Tip #5: Enough with the bad pictures

Tweets have a short shelf life, but your Instagram feed has staying power. A photo you posted three weeks ago will continue to get hearts for the next year. So why include crappy pictures? If there’s anything ugly in your feed delete it now. That goes for dumb pictures too, like a photo of your soap dispenser. These things don’t belong on your Instagram feed.

Also pay attention to lighting. If your photo is too dark, fix it with an app like Afterlight. Or better yet, take a better picture in natural daylight.

The bottom line: Instagram has its own culture based on friendship, engagement, and high quality photography. Be generous with hearts, polite to strangers, and you will do fine! 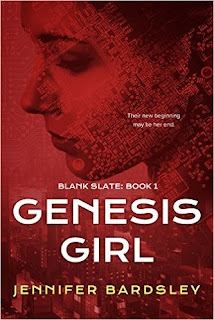 Eighteen-year-old Blanca has lived a sheltered life. Her entire childhood has been spent at Tabula Rasa School where she’s been protected from the Internet.

Blanca has never been online and doesn’t even know how to text. Her lack of a virtual footprint has made her extremely valuable and upon graduation Blanca, and those like her, are sold to the highest bidders.

Blanca is purchased by Cal McNeal, who uses her to achieve personal gain. But the McNeals are soon horrified by just how obedient and non-defiant Blanca is. All those mind-numbing years locked away from society have made her mind almost impenetrable.

By the time Blanca is ready to think for herself, she is trapped. Her only chance of escape is to go online.

Jennifer Bardsley writes the parenting column “I Brake for Moms” for The Everett Daily Herald. An alumna of Stanford University, Jennifer lives in Edmonds, Washington, with her husband and two children.