E.R. Frank, author of LIFE IS FUNNY, on figuring out your pattern

We're excited to have E.R. Frank here to tell us more about her latest novel LIFE IS FUNNY. 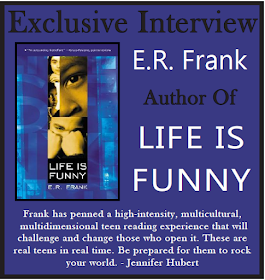 E.R., what was your inspiration for writing LIFE IS FUNNY?

My inspiration for Life is Funny actually came from adults. I was living in Brooklyn and working in Manhattan as a group counselor for addicted and homeless women. Many of the clients had grown up in foster care. Also, many of them were in their early twenties and had lost their own children to foster care. They would talk about visits with their kids, longing to have their kids back, and worry they would never again be able to raise their own children. I began to wonder about who those kids were and what life was like for them. I also wondered about the childhoods and teen years of the women with whom I was working. A book began to form in my mind that I thought would alternate chapters between these moms and their children. But when I began to write, it was all teenage voices that spoke up and demanded to be put on the page. Strangely, very few of them were foster kids. And that’s how the novel came to be.


There were two scenes that were hard for me to write. One was the sex scene between Gingerbread and Keisha. It was the first sex scene I’d written, and somehow I kept worrying about what my own parents would think when they read it. Apparently you are never too old to feel embarrassed around your mom and dad!

The other scene that was really difficult was the phone call Linnette makes to God after her brother dies. Although I have never lost a sibling, I felt really connected to Linnette’s bewildered grief. So writing that scene required a lot of emotional navigating on my part.

As far as advice to other writers: write! Find your rhythm; figure out your pattern. If you need to establish a certain time and place to do your writing each day or week or month, do it and stick to it. If you are not a scheduling type and write best randomly late at night or in the middle of the day, just make sure that random time actually happens. The more you write, the better you get, just like anything. The second piece of advice is: rewrite. Assume you will need to write multiple drafts in order to produce something that you feel good about. Don’t lose hope. Also: read. Read whatever you want, whatever you like. Just keep reading.

E. R. Frank’s seminal first novel weaves together the stories of eleven teenagers in one city over seven years in this groundbreaking and “impressive debut” (Publishers Weekly, starred review).

Why does Gingerbread always have a smile on his face? “Because life is funny,” he tells Keisha. But for her—and almost everyone else in her Brooklyn neighborhood—there doesn’t seem to be much to laugh about.

China, Ebony, and Grace are best friends, but Grace’s mother isn’t crazy about her being friends with two girls who aren’t white, and each cut Ebony makes on her wrist seems to drive them even further apart.

Just across the schoolyard there’s Eric who has to raise his younger brother Mickey, even though no one expects him to amount to anything. Meanwhile, Sonia’s Muslim parents expect everything of her, and it may be more than she is able to give after she suffers a shattering loss.

When Drew brings his father’s Jaguar into Sam’s family’s auto body shop across town they seem to be from opposite sides of the tracks, but Drew’s the one hiding a dark family secret. And he’s not the only one.

E. R. Frank is the author of two highly praised novels for Atheneum: America and Friction. Her first novel was Life Is Funny, winner of the Teen People Book Club NEXT Award for YA Fiction and was also a top-ten ALA 2001 Quick Pick.

In addition to being writer, E. R. Frank is also a clinical social worker and psychotherapist. She works with adults and adolescents and specializes in trauma.

Have you had a chance to read LIFE IS FUNNY yet? Do you feel embarrassed about your parents reading your sex scenes? Do you do better with a scheduled writing time or just writing randomly? Share your thoughts about the interview in the comments!