Our July 1st 5 Pages Writing Workshop will open for entries on Saturday, July 2 at noon, EST. We'll take the first five Middle Grade or Young Adult entries that meet all guidelines and formatting requirements. Click here to get the rules. I will post when it opens and closes on Adventures in YA Publishing and on twitter (@etcashman), with the hashtag #1st5pages. In addition to our wonderful permanent mentors, we have Amy Nichols as our author mentor, and Tanusri Prasanna as our agent mentor. So get those pages ready - we usually fill up in under a minute!

Amy K. Nichols is the author of the YA science fiction Duplexity series (Now That You’re Here and While You Were Gone), published by Knopf Books for Young Readers. She is a mentor and Teaching Associate with the Your Novel Year Program at the Virginia G. Piper Center for Creative Writing, as well as the Spring 2016 Writer in Residence for the Glendale Public Library. Insatiably curious, Amy dabbles in art and quantum physics, and has a long list of things to do before she dies. She lives with family outside Phoenix, Arizona.

Duplexity Omnibus (Book 1: Now That You're Here & Book 2: While You Were Gone) 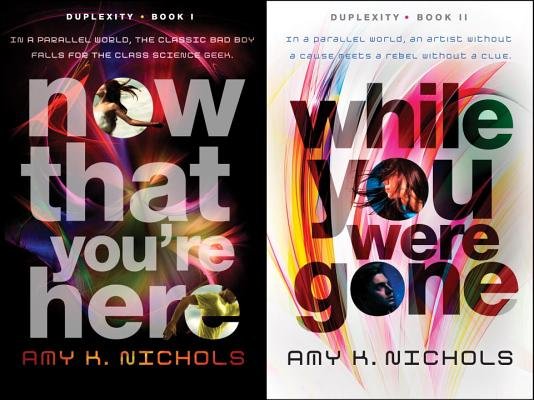 Book 1: Now That You're Here. Danny is a street-smart graffiti artist who is jolted into a parallel world. Eevee is the unexpectedly alluring science geek he kissed once in his world and finds himself falling for in this one. Together, they must figure out what caused Danny's jump, before another jolt in the space-time continuum leaves them back at square one.

Book 2: While You Were Gone. In a city where censorship is everywhere and security is everything, Eevee is an artist with a bright future, until an accident destroys her prospects. Danny is given a fresh start when a glitch in the universe lifts him out of his own dead-end life and drops him in a parallel world. But his alternate self is tangled up with an anarchist group that could land him in deep trouble.

As Danny sifts through clues from his past and Eevee attempts to piece together her future, they uncover a secret that is bigger than both of them ... and together, they must correct the breach between the worlds before its too late.

Tanusri, an agent at Hannigan, Salky, Getzler Agency, is interested in all sorts of kidlit, ranging from picture books and middle-grade to YA (including YA/Adult crossovers). Tanusri is drawn to storytellers who deftly inveigle readers into their intricately-crafted plots with great voice and a touch of humor, and to writers with a vivid sense of the absurd. And while her primary interest is kidlit, she is also open to selective domestic suspense (Tana French and Sophie Hannah are two of her favorite authors in the genre) and voice-driven narrative non-fiction on social justice issues. Tanusri is also eager to find writers who can authentically articulate diverse voices and communicate the beautiful complexity of the world around us in their stories. You can follow her on twitter at @TanusriPrasanna.
Erin Cashman at 6:00 AM