Shari Goldhagen, author of 100 DAYS OF CAKE, on inventing everything about your characters

We're delighted to have Shari Goldhagen join us to share more about her latest novel 100 DAYS OF CAKE. 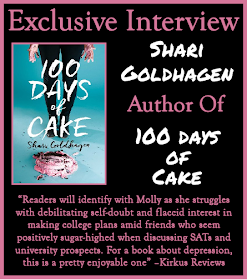 Shari, what scene was really hard for you to write and why, and is that the one of which you are most proud?

I don’t know that it’s a specific scene, but when I started the book, I found that I was super intimidated to write about Molly’s depression and anxiety. For one thing reading about someone who’s depressed can be a bummer—and it was important to me that the book be fun!

I was also terrified of offending people or having a bunch of psychologists issuing warnings about the book. Mental health issues affect so many people and they can be pretty charged. I knew what my own experiences were like, but I didn’t want to put out the “wrong” message to young adults.

Finally I just took a deep breath and said, well, screw it! This isn’t a treatment manual and I’m not a doctor (if I were, I would definitely advise against crushing on your shrink). It’s a novel, so I’m way more interested in Molly’s character traits than any specifics of various DSM-5 conditions. It was really liberating . . . but I wouldn’t be shocked if there was a little hate mail.

I was young-ish when I sold my first novel, but if you figure I’d been working on it roughly since birth, it still took a good twenty-some years to write Family and Other Accidents. And then it was a solid eight years before I sold my next novel—In Some Other World, Maybe. It wasn’t that I spent those years focused and toiling away; it was just a lot of starts and stops with different projects (one of which I swear I will eventually finish), plus I was essentially working full time at various magazines. And, you know, life stuff.

But a few months before ISOWM came out, my agent got a call from an editor at a children's division of Simon & Schuster. She’d read my first book (making her one of the few people who did so without being related to me) and thought I’d be a really good fit for YA. We met and talked and developed the idea for 100 Days of Cake really fast. They were hoping for a turnaround of about 18 months, which meant the book would have to be finished in about nine months.

I signed the contract and cashed the check, but I wasn’t a bastion of optimism. After all it had taken eons and empires to write my last two books, and that was before I had a baby and a day job and a bunch of stuff I had to do to promote ISOWM. Still I figured it was a good way to try avoid going another decade before my next book.

And it got done! Maybe it was that I made an outline (I’d always poo pooed those before) maybe it was that I’d spent the advance, maybe it was just that having so much on my plate actually allowed me to focus when I did have time. Around the deadlines, I did still have a few panic attacks and start irrational fights with my husband (industry standard), but overall the book was a great experience and showed me I was capable of completing two books during the Obama administration.

That I’m finally old enough to write YA!

When I was in college in my late teens and early twenties, I wrote all these first-person stories about young women in their late teens and early twenties who were, let’s be honest, just me with a different name and hair color. So it was pretty sad when in workshops people would say that they liked the writing, but the main character was just awful.

The problem was that I was just making a lot of assumptions that readers would know my characters like I did, and I didn’t get a lot of the important stuff on the page—I was too close to it. So I tried this thing where I wrote about men in their thirties and forties. Since that wasn’t my personal experience, I really had to invent everything about them, and they became fully developed in a way that my earlier characters weren’t.

When I sat down to start writing 100 Days of Cake, I realized that I would have to invent Molly and her crew from the ground up, because I am freaking ancient.

I have a couple projects. I still love reading YA, so it shouldn’t really have come as such a shock how much I enjoyed writing in the genre. I have a couple of ideas I’m working on.

And then it is my sworn life’s goal to finish the adult novel I was working on and abandoned before starting ISOWM. Like my other adult novels, it’s told from multiple points of view, but the time frame is a lot tighter and there are a lot of mystery elements. I think the problem has been that I’ve been hesitant to really go in there and overhaul it, but I think I’m ready now. Get well soon isn’t going to cut it in this quirky and poignant debut novel about a girl, her depression, an aggressive amount of baked goods, and the struggle to simply stay afloat in an unpredictable, bittersweet life.

There are only three things that can get seventeen-year-old Molly Byrne out of bed these days: her job at FishTopia, the promise of endless episodes of Golden Girls, and some delicious lo mien. You see, for the past two years, Molly’s been struggling with something more than your usual teenage angst. Her shrink, Dr. Brooks isn’t helping much, and neither is her mom who is convinced that baking the perfect cake will cure Molly of her depression—as if cake can magically make her rejoin the swim team, get along with her promiscuous sister, or care about the SATs.

Um, no. Never going to happen.

But Molly plays along, stomaching her mother’s failed culinary experiments, because, whatever—as long as it makes someone happy, right? Besides, as far as Molly’s concerned, hanging out with Alex at the rundown exotic fish store makes life tolerable enough. Even if he does ask her out every…single…day. But—sarcastic drum roll, please—nothing can stay the same forever. When Molly finds out FishTopia is turning into a bleak country diner, her whole life seems to fall apart at once. Soon she has to figure out what—if anything—is worth fighting for.

After serious pursuits of literature at Northwestern (BSJ) and Ohio State (MFA), Shari Goldhagen discovered she had a knack for sifting through celebrity trash and worked as a gossip writer for publications including The National Enquirer, Us Weekly, and Life & Style Weekly. And her articles on pop culture, travel and relationships have appeared everywhere from Cosmopolitan to Penthouse. She has received fellowships from Yaddo and MacDowell and currently lives in New York City with her husband and daughter.

Have you had a chance to read 100 DAYS OF CAKE yet? Does writing with a tight deadline help you be more productive? Are your main characters based on you or invented from the ground up? Share your thoughts about the interview in the comments!